These verses in Kipling’s handwriting, addressed to Professor and Mrs Hill and signed ‘Rudyard Kipling’, are dated 25 December 1888. They are now in the Library of Congress. They were not collected by him but are included in
Rutherford (p. 442) and Pinney (p. 1921). 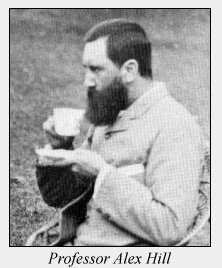 Alex Hill was Professor of Science at Muir Central College in Allahabad, he was an Ulsterman, a meteorologist, and also a keen photographer in the early days of that art. He and his wife Edmonia befriended Kipling when he moved from Lahore to Allahabad in November 1887. Rudyard lived as a guest in their house in the second half of 1888. 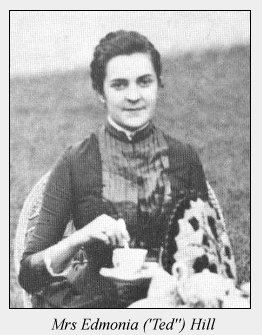 Edmonia was American, the daughter of the President of Beaver College for Women in Pennsylvania.

Eleven years older than Kipling, they became good friends, and she became his closest confidant. His letters to her between April 1888 and October 1889 occupy nearly 150 pages of Professor Pinney’s first volume of Kipling’s letters. See also
Andrew Lycett pp. 155-158.

Mrs Hill suffered a severe illness in January 1889, and the couple decided to go on leave to her family home in Pennsylvania when she was well enough to travel. They planned to sail to San Francisco via Burma, Singapore, Hong Kong and Japan. In the event Kipling accompanied them on their voyage on his way to England, but that arrangement had not been envisaged when he wrote the poem.

Nearly fifty years later, after Kipling’s death in 1936, Edmonia wrote two memoirs of him which are collected in  Harold Orel Vol I: “My Friend, Rudyard Kipling” (p. 91), and “The Young Kipling” (p. 95).

For more back ground on Alec Hill see this site, created by one of his descendants.

This is an affectionate tribute to close friends. Kipling starts with a traditional Christmas greeting and then thanks them for welcoming him into their home, an awkward guest, inky, noisy and untidy. He ends by listing all the blessings that they deserve to receive at the various stages of their voyage to America.

[Verse 6]
An inky gamin a gamin is a small boy, a street urchin, in French. ‘ inky’ because he worked on a newspaper. The adjective is well-chosen: Kay Robinson, Kipling’s Editor on the CMG in Lahore, described the dangers of working in the same office:

There was one peculiarity of Kipling’s work which I really must mention; namely, the amount of ink he used to throw about. In the heat of summer white cotton trousers and a thin vest constituted his office attire, and by the day’s end he was spotted all over like a Dalmatian dog. He had a habit of dipping his pen frequently and deep into the ink-pot, and as all his movements were abrupt, almost jerky, the ink used to fly. When he darted into my room, as he used to do about one thing or another in connection with the contents of the paper a dozen times in the morning, I had to shout to him to ‘stand off’ otherwise, as I knew by experience, the abrupt halt he would make, and the flourish with which he placed the proof in his hand before me, would send the penful of ink—he always had a full pen in his hand—flying over me.

[Verse 9]
the Pi the Pioneer, the newspaper for which Kipling worked in Allahabad, sister paper of the Civil and Military Gazette in Lahore.

Halcyons kingfishers. In Greek legend, the kingfisher laid its eggs on the surface of the sea, which remained calm until they hatched.

[Verse 16]
No plate the Hills were enthusiastic amateur photographers. At that time photos were taken on large and fragile glass plates. See “A Ballad of Photographs”.

F.R.S. Fellow of the Royal Society. To be an F.R.S. was and is to be recognised as a leading scientist.