the Calcutta Review has written very sweetly about a poem of mine – in blank verse – which appears in the August number.
(in fact it was postponed until the October)

The Calcutta Review was a successful quarterly, founded in May 1844, and owned in Kipling’s day by Thacker Spink & Company. Pinney notes that in a letter to Cormell Price on September 19th 1885 Kipling refers to this poem as ‘peculiarly blank verse’. (Letters 1 p. 86)

It is collected in the Sussex Edition (vol. 35 p. 170) and the Burwash Edition (vol 28) but not in Inclusive Verse or Definitive Verse.

Hamid Ali and a learned man, a moulvie, have been smoking ganja (cannabis) with two courtesans, in a chamber above the Delhi Gate of the walled city of Lahore. Hamid Ali, under the influence of the drug, has had a fearsome dream of dissolution and destruction, and the moulvie is called on to write it down. His presence, as a witness rather than an active participant, is similar to that of the narrator of “On the City Wall” in Soldiers Three and Other Stories, and “In the House of Suddhoo” in Plain Tales From the Hills.

In Hamid’s dream, the temples of all faiths, Islam, Christianity, Buddhism, Hinduism, and all their symbols, are destroyed with fire and the sword. All is lost, and the priests cry that the gods are dead. The Pearl dismisses the vision, telling Hamid that she at least is real. The moulvie hopes that it is only the ganja speaking, otherwise they are lost for their blasphemy.

ganja The buds of Indian Hemp, dried for smoking, cannabis.

Muezzin The crier who calls the Muslim faithful to prayer. 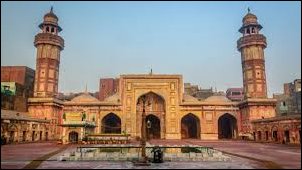 Mosque of Wuzzer Khan (usually Wazir Khan). One of the sights of Lahore, built by the Mughal Emperor Shah Jahan in 1641. c.f. “The City of Dreadful Night” (Life’s Handicap p. 371), published at almost the same time as this poem, September 1885.

In that story, the narrator, wandering through the sleeping city as Kipling often did, climbs one of the minarets hoping for a breath of cool air, and hears the muezzin making his midnight call, ‘Allah ho Akbar!’ (‘God is the Greatest!’).

The Twelve the twelve Imams, religious leaders of the Shia branch of Islam.

Moulvie title given to a learned man.

As people hold shall be in two more years a popular prophecy of an invasion from the north which will sweep the British away. They always felt a Russian invasion was a threat: see “The Man who Was”, “The Truce of the Bear”, and above all “Kim”. 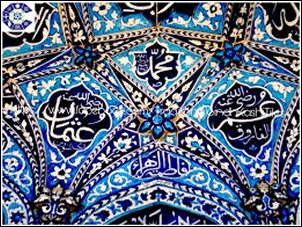 kashi tilework.(right) The interior of the Mosque of Wazir Khan is richly embellished with elaborate floral and geometric tiles.

The Banner Shiite banner carried in procession at the Mohurrum festival. See “On the City Wall” (Soldiers Three, p. 339)

the Crescent The emblem of Islam, as the Cross is of Christianity.

the Wheel The Buddhist emblem of the Wheel of Life. See “Kim”. 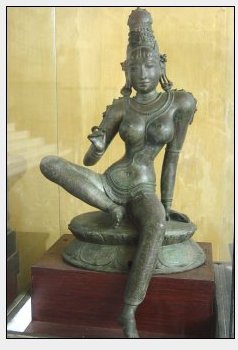 Parvati (left) The Hindu Goddess of fertility, beauty, and love, the wife of Siva.