Reprinted in Aeroplane, January 17 1934 apparently by ‘special permission of Mr Rudyard Kipling’ who had indicated that the verses could be read ‘as an allegory of Russia’s attitude in drawing civilized Europe into trade agreements today.’

The poem may be dated by the reference in Caroline Kipling’s diary for August 31st 1898 to “The Bear That Walks Like a Man.” Kipling’s letter to Moberly Bell of 12 September 1898 claims that the story is based on fact. However, it also establishes that he wanted it to be read in a political sense from the very start and would have much preferred it to come out in The Times: ’Put it in as “sporting” in the (sic) Times and save 20 quid’, he pleaded. ‘It will be smothered in Literature’. He was intent on making its political meaning clear, deliberately courting controversy: ’Put I wanted the row in The Times, and all the virtuous people who believe Russia to be civilised calling you names’. (Letters Vol 2, Ed. Pinney.)

It is useful to read this poem alongside “The Destroyers”, which made its first appearance only a few months earlier. At that time Russia had requested the British fleet to withdraw from Port Arthur; fresh discords were to follow. Throughout July and August of 1898 reports in The Times bear witness to prolonged tension over Russian activities in Manchuria, where Russia was building a branch rail line of great strategic importance at Niu Chwang.

Some voices, among them those of Sir Edward Grey, and Earl Onslow, the Under-Secretary of State for India, had attempted to deny there was cause for mistrust; The Times itself published a letter reporting the kindness a group of British travellers had experienced at the hands of the Russian military governor of Kronstadt. But when it was announced that Russia was to spend in excess of 15 million in sterling on new ships for its navy and that the contracts were going to France, America and Germany, rather than Britain, that may have prompted Kipling to issue his warning.

His early experience as a young journalist commenting on the Afghan Border Crisis of 1884-5 had left Kipling with a lasting mistrust of Russia and its territorial ambition. (See Neil K. Moran, Kipling and Afghanistan, where these early pieces from the Civil and Military Gazette are reprinted.) As early as 1890, in the short story “The Man Who Was”, Kipling had described Russia as belonging to Asia and ‘not going to be civilized after the methods of the West.’ In the will drawn up 10 days before he died Kipling stipulated that no investment in Russian stocks should be made by the trustee of his estate.

Though it offers all the pleasures of a gripping yarn, the poem also challenges readers in ways that Kipling might not have predicted ; at a certain level the bear and the human hunter whose face he destroyed are disturbingly alike.

In March 2022 Peggy Noonan, in her column in the Wall Street Journal, mindful of the Russian attack on Ukraine, recalled  that in 1903, some 120 years ago John Hay, the American Secretary of State,   had written to President Theodore Roosevelt  about conflicts with Czarist Russia: 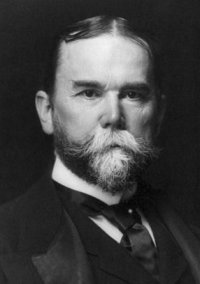 “Four years of constant conflict …  have shown me that you cannot let up a minute on them without danger to your midriff.  The bear that talks like a man is more to be watched than Adam Zad”

There had been war between Russia and Japan over Russia’s aim of taking over Manchuria. America sided with Japan and was instrumental in securing peace, for which President Roosevelt was awarded the Nobel Pease Prize.

David Alan Richards recalls that Hay was a good friend of Kipling, who lived in America from 1892 to 1896. Hay had been instrumental in arranging for Kipling to have his own personal post office in Brattleboro, Vermont, to cope with his voluminous correspondence. [D.A.R.]

(by Mary Hamer drawing on various sources, in particular
Ralph Durand, “A Handbook to the Poetry of Rudyard Kipling” 1914.)

[Stanza 1] The pass called Muttianee cf “The Miracle of Purun Bhagat”, where this pass is noted as a stage on the Himalaya-Tibet road.

Adam-zad said to be the name – ‘son of Adam’ given by Kashmiri hunters to bears, on account of their resemblance to humans. An extended discussion of the meaning of this term can be found in the Kipling Journal April 1956 and July 1956.

[Stanza 3] flint . . .pricked and primed was the pan in the case of muskets, the pan, a small hollow at the side of the lock, contained the charge of gunpowder, with which it was said to be ‘primed’. This charge was ignited by a spark made when the flint was struck with steel; the steel was pricked, i.e. cocked, ready to strike. Matun was fully prepared.

musket these muzzle-loading shoulder firearms were replaced in the mid-nineteenth century by the breech-loading rifle. From that time the name ‘musket’ was restricted to obsolete forms of the weapon, with ‘rifle’ or other technical term being used for contemporary firearms.