First published with the article “Mountains and the Pacific” in the Morning Post on April 23rd 1908, one of eight “Letters to the Family” on Kipling’s visit to Canada in 1907. Also published in Collier’s Weekly of April 25th.

The poem describes a fleet in Vigo Bay, off the Soanish coast, where the three-decker flagship is crowded with men, while the smaller fighting vessels are short-handed and desperate for more seamen, a common state for ships of the Royal Navy over the centuries.
Ann M Weygandt (p. 32, note 24) points out that the Ark Royal was the flagship of Howard’s fleet at the battle of the Armada in 1588, and that there were several actions in Vigo Bay before and after that time. Drake and his admirals frequently pleaded for more men..

See also “Simple Simon” in Rewards and Fairies (1910), for Kipling’s interest in Drake and the Spanish Armada.

At a time when the Liberals, the anti-imperial party, were in power in Westminster, and the relationship of Britain with her Empire, in particular its defence against potential enemies, was hotly debated, this is clearly a metaphorical flagship, standing for the mother-country, too heedless of the needs of her underpopulated sister-nations. This was a continuing concern for Kipling as he travelled through Canada.

At the Canadian Club in Winnipeg, he said:

I have, I confess it now, done my best for about twenty years to make all the men of the sister nations within the Empire interested in each other. Because I know that at heart all our men are pretty much alike, in that they have the same problems, the same aspirations, and the same loves, and the same hates; and when all is said and done, we have only each other to depend upon.

And in Toronto, speaking of “Imperial Relations” he said:

Then the question is, are we not in time of peace a little too prone as nations to repeat that blunder in our relations to our fellow-nations throughout the Empire? Put it this way: Are we not each a little too occupied in our immediate present—in time of peace a little too occupied with our immediate present, to take an interest in the potentialities of our neighbours’ future? I say in time of peace, because all the world remembers when one of our community was in distress Canada went to her aid, as Australia went, as New Zealand went, as the Crown colonies went, without one thought of present interests, or politics, or pocket.

A continuing theme during Kipling’s visit was immigration, and in particular the need for over-populated Britain to send more men and women overseas to participate in the growth of Canada. In an interview with the Toronto Globe he said:

Immigration is what you want in the West. You must have labourers there …. Pump in the immigrants from
the Old Country. Pump them in; England has five million of people
to spare

This is precisely the message he was aiming to convey in this poem.

Weygandt, analysing Kipling’s debt to the Elizabethan poets, whose concernes were lyrical rather than poliitical,
notes (p.32):

…it is not in the couplet that Kipling does his best “Elizabethan” work. That is accomplished in a stanzaic form very popular throughout the reigns of Elizabeth and James, – the form of Lodge’s “Pluck the fruit and taste the pleasure”, of Daniel’s “Are they shadows that we see ?”, Campion’s “Shall I come, sweet love, to thee?”, and Wotton’s “Oh thou great power in whom I move.”

Three times Kipling employs this stanza, or a modification of it, in poems whose mood is narrative rather than lyrical. Thus “The Pro-consuls”. “When the Great Ark”, and “The Fabulists”, while their music is Elizabethan, produce a very different effect from the songs of Daniel and Campion. We realise the appropriatnesss of the Elizabethan form in the allegory of the great Ark in Vigo Bay…. 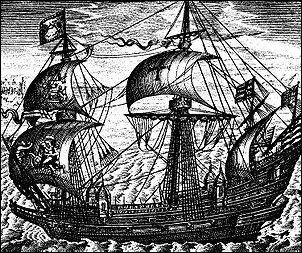 The Great Ark Ark Royal (left) was an English galleon, originally ordered for Sir Walter Raleigh and simply called Ark, and bought by Queen Elizabeth I in 1587 for £5000 for service in the Tudor navy, becoming Ark Royal.

She was used as the English flagship in a number of engagements, including the battles that resulted in the defeat of the Spanish Armada.

Incidentlly, RK was rather attached to the archetypal Ark, that of Noah, and sometimes used it as a signature, as in his illustration in Just So Stories of ‘the World so-new-and-all’. See “How the Camel got His Hump”, p. 21.

Vigo Important strategic city in Galicia, in North-West Spain, on the Atlantic coast. Vigo Bay was also the scene of a naval battle on 23 October, 1702 in which an Anglo-Dutch fleet defeated the French and Spanish.

hand and reef the management of sails, keeping watch – a spell on duty – and steering the vessel; some of the duties of an experienced seaman.

three decks A three-decker was a sailing warship with guns on three decks, in the fashion of HMS Victory of Nelson’s time, which can be seen to this day in her dock at Portsmouth. Kipling memorably uses the idea of a great three-decker as a metaphor for his hopes for his work in his young days: 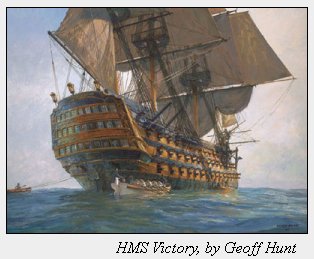 I dreamed for many years of building a veritable three-decker out of chosen and longstored timber—teak, green-heart, and ten-year-old oak knees—each curve melting deliciously into the next that the sea might nowhere meet resistance or weakness; the whole suggesting motion even when, her great sails for the moment furled, she lay in some needed haven—a vessel ballasted on ingots of pure research and knowledge, roomy, fitted with delicate cabinet-work below-decks, painted, carved, gilt and wreathed the length of her, from her blazing stern-galleries outlined by bronzy palm-trunks, to her rampant figure-head—an East Indiaman worthy to lie alongside The Cloister and the Hearth.

Not being able to do this, I dismissed the ambition as ‘beneath the thinking mind.’ So does a half-blind man dismiss shooting and golf.
(Something of Myself, “Working Tools”, p. 228)

pest in this context an outbreak of disease.