A soldier muses on his approaching death much as Jesus prayed in the garden of Gethsemane before his crucifiction.

Your own boys can bear out the truth of this—and of the horror that overtakes a man when he first ships his gas-mask. What makes war most poignant is the presence of women with whom one can talk and make love, only an hour or so behind the line.

Charles Carrington served as an infantry officer in the trenches throughout the war. See his Chapter XIX for an examination of other prose and verse concerning the 1914 War, in particular p. 474 for the suggestion that these verses convey:

That last shrinking from the ultimate and the inevitable is the subject of the war-poem “Gethsemane” which many readers have found difficult.

He then quotes the note to Doubleday above.
Peter Keating writes (p. 212):

The Biblical allusion is in Matthew 26.39:

“O my Father, if it be possible, let this cup pass from me…”

Kipling’s soldier, in his Gethsemane, Picardy, also begs that his “cup may pass”. For neither Christ nor the soldier is there any escape. Christ must die to save the world that will now destroy the soldier with poison gas. All that the soldier wants is to participate in the mundane everyday life that he observes around him … When Christ looks around him for comfort he finds his disciples are sound asleep, unconcerned; the maimed or dead soldier can expect no comfort, perhaps not even from Christ himself.

…had become obsessed with the problem of pain and and the nature of fear—the limits of human endurance before collapse. The agony of the individual in the face of this terror, and his acceptance of it, is poignantly caught in one of his greatest and most searing poems….

In her Chapter XIII “Via Dolorosa, The Great War” Marghanita Laski (p. 166) writes:

The New Testament also provided the imagery for the poem “Gethsemane”, which was not published until 1919. Its subject is the German use of poison-gas, which Kipling seems to have pronounced with a long ‘a’ to rhyme with the Southern English pronunciation of ‘pass’

His great war poem expressing all the agony of the individual giving himself to something greater than himself, in the searing poem “Gethsemane” … (quoted here) In those days everybody would have recognized the reference to Christ’s agony in the garden (Matthew, 26.36, and Mark 14,32.)

Since verse remained Kipling’s favourite medium for expressing his views, propaganda and politics are only occasionally absent from his wartime poetry. But (this) one poem at least places him in the front rank of war poets:

‘The Garden called Gethsemane
In Picardy it was,
And there the people came to see
The English soldiers pass…”

[Title] Gethsemane was the garden at the foot of the Mount of Olives in Jerusalem where Jesus and his disciples prayed on the night before Jesus was crucified. He knew what his fate would be. (Matthew 26,36)

Picardy a province in the north of France, Amiens is the largest city. The area includes the departments of the Somme, part of the Aisne and the Oise, scene of much bitter fighting in the 1914-18 War.

ship our masks ship here can be read as bear a burden. (OED)

masks were respiratore or gas-masks to protect against poison gas, containing filters in February 1915, and developed into the British Small Box Respirator in 1916 which was probably the most reliable gas mask used in the war. 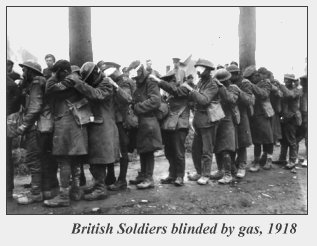 It was not very effective militarily in comparison with high explosive shells, since it depended on the uncertainties of the wind. But for the soldiers it was perhaps the most feared weapon of the war.

I prayed my cup might pass an echo of Jesus in the garden of Gethsemane told in Matthew 26, 39:

“And he went a little farther, and fell on his face, and prayed, saying O my Father, if it be possible, let this cup pass from me: nevertheless not as I will, but as thou wilt.”