Published with “A Doctor of Medicine” in Rewards and Fairies (1910), where it reflects the beliefs of Nicholas Culpeper. It is listed in ORG as Verse 955. The notes in blue below about the various herbs are taken from the 1826 edition of Culpeper’s Herbal.

See also Kipling’s lecture in November 1928 to the Royal Society of Medicine on “Healing by the Stars”.

There is a musical rendition by Peter Bellamy here.

Alexanders (Smyrnium olusatrum) an edible herb, rather like celery, parsley, or chervil.

Marigold (Tagetes) ‘It is an herb of the Sun, and under Leo’.

Eyebright (Euphrasia) ‘It is under the sign of the Lion, and Sol claims dominion over it. The juice helps all infirmities of the eyes that cause dimness of sight’.

Orris the root of various irises (Iris germanica), used in perfumery and in herbal medicine today.

Basil Both basil (Ocimum basilicum) spelt ‘bazil’ by Culpeper, and rocket (rucola) , are widely used for cooking today. ‘It was a herb of Mars, and under the scorpion. Being applied to the place bitten by venomous beasts, it speedily draws the poison to it. Every like draws his like.’

Elecampane (Inula helenium) a tall herb whose roots are used medicinally. It has recently been found to have anti-bacterial properties.

Rocket ‘All this kind of rockets are martial plants.’ 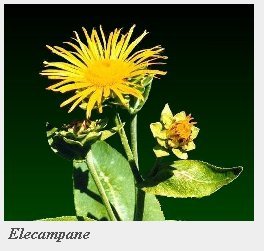 Valerian (valeriana) has well-known sedative properties. ‘This is under the influence of Mercury’.

Vervain (verbena) Vervain has long-standing use in herbalism and folk medicine, usually as a herbal tea. ‘This is an herb of Venus, and excellent for the womb.’

Call-me-to-you a name given to the pansy (viola), a familiar flower in cottage gardens. 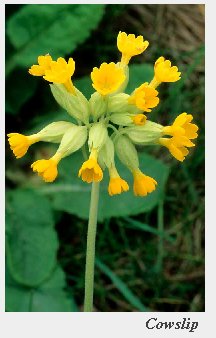 Cowslip (Primula veris) A familiar sweet-smelling yellow flower in the meadows of England before the days of herbicides. ‘Venus lays claim to the herb as her own, and it is under the sign Aries; and our city dames know well enough the ointment or distilled water of it adds beauty, or at least restores it when it is lost.’

On reading this note Roger Ayers dug out a little verse that he wrote on May Day, 1976:

Is it really seven years
Since we made cowslip wine?
And the flowers bloomed on Rushall Down
As they had through measured time.

We could not fill a teacup now
With the little yellow bloom
For the fields are dressed with the chemist’s best
Which sealed the cowslip’s doom.

‘But it has not been all disaster. Some years later, our son, Tim, planted a vineyard where a few cowslips were growing. Because he knew my verse, he transplanted them into a corner of our garden. Since then they have migrated round the garden and, secure in their ‘protected’ status, have indiscriminately colonised lawns, flower beds and rockeries to our great joy every spring.’ [R.C.A.] 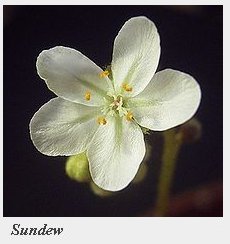 Rose of the Sun this may be sundew (drosera anglica) rather than a rose.

According to Culpeper ‘the Sun rules it and it is under the sign Cancer. The leaves bruised and applied to the skin, erode it, and bring out such inflammations as are not easily removed. The juice destroys warts and corns, if a little be frequently put upon them … It is under the dominion of Venus.’

The Sun was lord of the Marigold The Marigold (Tagetes) is a familiar flower in country gardens. ‘It is an herb of the Sun, and under Leo.’

Basil and Rocket belonged to Mars See above.

Who but Venus should govern the Rose?   See here for some classical associations between Venus and the rose [D.H.]

Who but Jupiter own the Oak?  The oak is sacred to Zeus/Jupiter in the Greco-Roman tradition, notably through association with the oracle at Dodona. [D.H.]

Dirt has nothing to do with disease Not until 1847 did the Hungarian obstetrician Ignaz Semmelweiss show that simply washing ones hands between patients would dramatically reduce the death rate in a maternity hospital. This was before it was proved that germs cause disease.

Bleed and blister as much as you will treat a patient by drawing blood from him or by blistering his skin by burning or applying a caustic.

Bloodletting (‘bleeding’) was used to treat a wide range of diseases before the days of modern scientific medicine, becoming a standard treatment for almost every ailment. The more severe the disease, the more blood would be let. When you consider how many conditions are now treated by blood transfusion, giving the patient blood instead of taking it away, Kipling is right in Verse 3 line 3: ‘Half their remedies cured you dead.’

Today two diseases are still treated by bleeding: Polycythemia rubra, where the body produces an excess of red blood cells, and Haemachromatosis, where there is too much iron in the blood.

sore in the land  A Biblical expression: [D.H.]

When the famine had spread over the whole country, Joseph opened all the storehouses and sold grain to the Egyptians, for the famine was severe throughout Egypt. [Genersis 41,56]

when the crosses were chalked on the door to show that there was plague in the house.

the terrible death-cart rolled when there were too many deaths from plague for ordinary burial, the dead were collected in an open cart and taken to a mass grave. 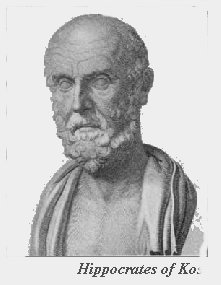 Hippocrates (c. 460-359 B.C.) the most celebrated physician of antiquity, who practised on the Greek island of Kos. He originated the theory of the four humours, see above.