Charles Carrington describes the poems in Echoes as ‘humorous mock-heroic trifles’ (p.93). In “Estunt the Griff” Kipling burlesques his own passage to India on the S.S. Brindisi in October 1882 by adopting the epic tone of the verse sagas of William Morris, such as “Sigurd the Volsung”, published in 1876. The poem is clearly autobiographical because the Estunt (‘assistant’) of the title is not a voyaging Viking, but the future Assistant Editor of the Civil and Military Gazette in Lahore, who after many years spent in England now has to see himself a “griff” or newcomer to India, the place of his birth. The poem describes the discomfort and apprehension of leaving England along the dismal rainy banks of the Thames. 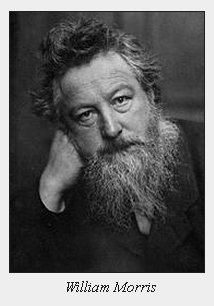 William Morris, with his pre-Raphaelite friends, writers. artists, and designers, had had a deep interest in the Middle Ages, before industrialism and before the Renaissance, as a source of inspiration in ideas and artistic expression. He had been a frequent visitor in Kipling’s childhood to the house of Rudyard’s Aunt Georgie Burne-Jones, in Kensinghton. Morris had been a revered figure as young Rudyard’s ‘UncleTopsy’. See Something of Myself pp. 12-15.

Perhaps more than any other writer, he was responsible for the popularising of Norse myth in Victorian Britain, a passion intensified by his trip to Iceland in 1871. Kipling takes as his verse model not the terza rima of Sigurd the Volsung but rather the narrative couplets found in the earlier “Prologue – The Wanderers” section of The Earthly Paradise, published in 1868. Estunt’s journey east, from Gravesend to India, mirrors the journey of the Wanderers ‘to some Western land’.

Janet Montefiore suggests that the desolation of the scene at the ‘End of Graves’ is reminiscent of the desolate beach at Southsea, where little Ruddy and Trix went vainly to look for the parents who had set off for India and left them behind:

They climbed another dune, and came upon the great grey sea at low tide. Hundreds of crabs were scuttling about the beach, but there was no trace of Papa and Mamma, not even of a ship upon the waters—nothing but sand and mud for miles and miles.

And ‘Uncleharri’ found them by chance—very muddy and very forlorn—Punch dissolved in tears, but trying to divert Judy with an ‘ickle trab,’ and Judy wailing to the pitiless horizon for ‘Mamma, Mamma!’—and again ‘Mamma!’

As Charles Allen notes, upon arriving in India, in October 1882, “unlike most ‘griffs’ or newcomers, Ruddy had the luxury of being able to ‘chum’ with his parents” (p. 123). Lockwood and Alice Kipling had lived in Lahore for seven years, and Rudyard was given his own room in their bungalow. The family reunion was complete when his sister, ‘Trix’ also joined her parents from England at the end orf 1883. Several of the poems in Echoes. like this one, derived from the word games and other literary diversions that Rudyard engaged in during his spare time with her, while Assistant Editor of the Civil and Military Gazette.

[Argument] see the Argument which introduces “Prologue – The Wanderers” in Morris’s “The Earthly Paradise”: ‘Certain gentlemen and mariners of Norway, having considered all that they had heard of the Earthly Paradise, set sail to find it.’

[Title] Estunt is an Indian pronunciation of ‘Stunt’, that is, Assistant, Kipling’s editorial position with the Civil and Military Gazette.
Griff was Anglo-Indian slang for a newcomer to India. It derives from ‘griffin’. an eighteeth century expression meaning a ‘greenhorn’. Kipling writes in Something of Myself (pp. 40-41):

My Chief took me in hand, and for three years or so I loathed him. He had to break me in, and I knew nothing. What he suffered on my account I cannot tell; but the little that I ever acquired of accuracy, the habit of trying at least to verify references, and some knack of sticking to desk-work, I owed wholly to Stephen Wheeler. I never worked less than ten hours and seldom more than fifteen per diem…

[line 1] End of Graves Gravesend, off which the P. & O. liners moored in the Thames, passengers being ferried out by tender.

[line 13] shallop a light sailing boat, used as a tender.

[line 40] Fenchurch Street a central London railway terminus from which trains ran to Tilbury, near Gravesend.