This poem was first published in in the New York Sun on Sunday 28 August 1892, without a title, following Kipling’s article “Half-a Dozen Pictures”. It is collected in:

After first publication these verses were printed in the USA under the title “The Toilers.”

Peter Keating discusses the poem in the context of the links between Kipling’s poems and the prose pieces they accompany:

Although the connections between poetry and prose are sometimes slight, sometimes profound, they are always there. When a poem is separated from its original prose setting, it may survive perfectly well on its own, but it usually does so by becoming a slightly different poem. (p. 37)

On 20 August 1892 The Times published an article by Kipling, “Half-a-Dozen Pictures”: it was one of a series of travel articles called From Tideway to Tideway. The article describes a visit to an art gallery and Kipling’s reflections on the failure of most painters to match the beauty and vitality of the world around them. He offers some attractive verbal sketches of his own, though it is not part of his purpose to contrast the approaches to nature of writers and painters. His main concern is to urge artists of all kinds to get out and see the world for themselves: (Letters of Travel 1892-1913 p. 40):

Now, disregarding these things and others – wonders and miracles all – men are content to sit in studios and, by light that is not light, to fake subjects from pots and pans and rags and bricks that are called “pieces of colour”. Their collection of rubbish costs in the end quite as much as a ticket, a first-class one, to new worlds where the “props” are given away with the sunshine. (Letters of Travel 1892-1913 p.77).

Eight days later, the same article was published in the New York Sun. This time it closed with the untitled poem ‘When Earth’s Last Picture is Painted…’ which changed the article’s emphasis from an exhortation to artists to become travellers and pioneers, to what sounds very much like a manifesto for realism in art:

Four years later, Kipling changed the first line of that stanza to:

and used the poem as “L’Envoi” to The Seven Seas. In this context, with the references to Rembrandt and van Dyck removed, the poem becomes a romantic encapsulation of the views advanced throughout The Seven Seas – that true joy in life comes from dedication to whatever work is in hand, and that the task of the Artist is to convey to others the excitement and wonder of an expanding world.

The introduction of “The Master” maintains, in one sense, the imagery of painting on which the poem is based, but it also gives a religious or spiritual dimension to work, another recurrent theme of The Seven Seas. All of these various themes are present in the poem from the beginning, though given different kinds of prominence according to the setting. When the article “Half-a-Dozen Pictures” was eventually collected in Letters of Travel 1892-1913 (1920), the poem was not included: its prose connections had been cut completely loose.
(Peter Keating p. 40).

In the last paragraph of his introduction to Kipling’s novel The Light that Failed, about the struggles of Dick Heldar, a young artist, Geoffrey Annis concludes:

… let us leave the final word with Kipling himself, with the final four lines from “When Earth’s Last Picture is Painted” (1892), which seem a fitting tribute to both Dick Heldar and to Rudyard Kipling his creator.

Daniel Hadas notes: The theme of the blessed dead living among the stars is also found in the ‘Dedication from Barrack-Room Ballads‘, published the same year.[D.H.] 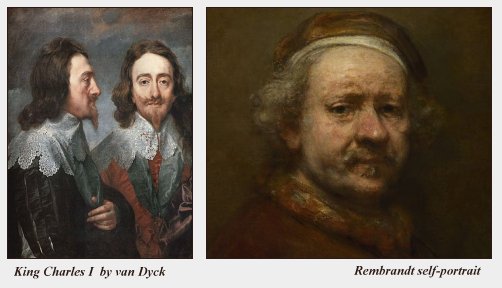 Rembrandt was a Dutch painter (1606-69), best known for his group portrait “The Night Watch” and a series of self-portraits spanning his whole career. Van Dyck was his contemporary (1599-41), born in Flanders, who emigrated to England in 1632 where he painted a famous series of portraits of King Charles I and his family.

Kipling would have been very familiar with the history of painting. Two of his mother’s sisters married well-known Pre-Raphaelites, Edward Burne-Jones and Edward Poynter. But why did he choose those two examples? The Australian artist Simon Mark suggests: “and only Rembrandt will teach us” may refer to the fact that he constantly had a school of pupils in his studio, both because he enjoyed teaching and for regularity of income, and he was known as a very effective teacher.

Simon Mark also suggests that the concept of van Dyck having the capacity to “blame” others may be to do with his ability to transform a person’s image by painting a portrait using great enhancement and flattery. He would possibly regard himself as having the judgement to criticise any portrait which did not show the idealised version of the sitter.

aeon an age of the universe, appropriate to the cosmic setting of the poem.

comets’ hair the tail of a comet looks like streaming hair; indeed the name comes from the Greek for hair, kome.