There is a version handwritten by Kipling in the Library of Congress in Washington D.C. dated 20 December, entitled “Preadmonisheth Ye Ghoste of Desmarets”. It is accompanied by grotesque drawings, and an end-note ‘Here shall end ye preadmonishment of ye ghoste’, as part of the handwritten programme for the play Plot and Passion. The list of dramatis personae includes Rudyard Kipling as Desmarets.

There is another handwritten version in the Kipling Papers at the University of Sussex, with the title “Speaketh Ye Ghost of Desmarets”, with only the first five stanzas.
Plot and Passion was a melodrama by T.P.Taylor and John Lang, performed by the Lahore Amateurs on 20 and 22 December 1883, in the Railway Theatre, Lahore. The play is set in Paris in 1810, a time of plots and assassinations, executions and war to the death. One of the principal characters is Maximilian Desmarets, head of the Secret Department of Police.

The Civil and Military Gazette, for which Kipling was Assistant Editor, carried an enthusiastic review on 22 December 1883 of the opening performance, commenting that ‘Desmarets is played by Mr. R. Kipling, who has evidently a talent for acting, and played a very complicated part with much success.’ Even warmer praise was given on 25 December for the performance on the 22nd, it being noted that ‘Desmarets seemed to be the hero of the evening, and, at the end of the second act, was loudly recalled’.

The poem, with the programme note, was clearly intended as a souvenir of this occasion, both versions being written neatly on small gilt-edged programme cards. (Rutherford , p. 201) It was never collected by Kipling, but is to be found in Rutherford p. 201, and Pinney p. 1709. It is full of his enthusiasm for France and things French.

Kipling borrowed the form of the title from Browning, whose works he had known and loved since his schooldays. In Browning’s “The Heretic’s Tragedy”, collected in Men and Women, the title of Section 1 is “Preadmonisheth the Abbot Deodaet”.

Kipling as an Actor

Who remembers Plot and Passion there [the Railway Theatre] eight years ago when the locomotives whistled down all the love scenes ?

In “Slaves of the Lamp, Part 1” in Stalky & Co. the Kipling figure, “Beetle”, takes part in a Christmas pantomime for which he has written most of the lyrics. His role as the Widow Twankey is inglorious, and in the tale, when “King” invades their rehearsal, he is embarrassed:

… the Beetle strove to efface himself behind the piano. A gray princess-skirt borrowed from a day-boy’s mother and a spotted cotton-bodice unsystematically padded with imposition-paper make one ridiculous. And in other regards Beetle had a bad conscience.

However, in India he was clearly gratified to discover the interest of Anglo-Indians in amateur theatricals, though in a jocular letter in verse in June 1883 he complains to his aunt Edith Macdonald of the difficulties of getting people to rehearsals. See “Dear Auntie, your Parboiled Nephew…”

I was given a holiday when my Father came home, and with him went to the Paris Exhibition of ’78, where he was in charge of Indian Exhibits. He allowed me, at twelve years old, the full freedom of that spacious and friendly city, and the run of the Exhibition grounds and buildings. It was an education in itself; and set my life-long love for France. Also, he saw to it that I should learn to read French at least for my own amusement, and gave me Jules Verne to begin with. French as an accomplishment was not well-seen at English schools in my time, and knowledge of it connoted leanings towards immorality. For myself;—

I hold it truth with him who sung
Unpublished melodies,
Who wakes in Paris, being young,
O’ summer, wakes in Paradise.

Lockwood gave his son a free pass to the Exposition, which was not yet open to the public, and a franc or two daily to buy his lunch at a cheap restaurant. Rudyard ran wild in Paris, playing at paper-chases in the Tuileries Gardens with an English friend, a Christ’s Hospital boy in blue cassock and yellow stockings.

Mostly they prowled in the back premises of the Exposition, talking to the workmen in school-boy French, and exploring among curiosities and art treasures, all the more alluring when half-disengaged from their wrappings. How things were put together, and what they looked like in the workshop, interested Rudyard most of all.

Ever after, Rudyard revelled in France and the French. See also his uncollected story “The First Assault on the Sorbonne”, and the notes by Max Rives on Souvenirs of France. Also the diaries of his motoring tours, many of them in France. 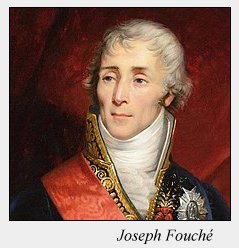 Fouché Joseph Fouché (1759-1820), politician, Minister of Police and then Minister of the Interior under the Emperor Napoleon. He was dismissed from office for suspected treason in1810. 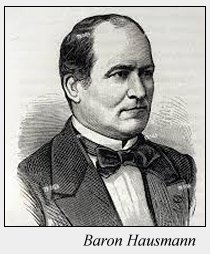 Hausmann Georges Eugene Hausmann (1809-91), the administrator responsible for the modernisation of the street system of Paris in the third quarter of the 19th century.

coup d’état Napoleon III seized power by a coup d’état and was proclaimed Emperor in 1852.

Rue La Harpe Hausmann’s plans drastically changed the old Quartier Latin, and the Rue de la Harpe was reduced to a side-street, but it was not “new” in the days of the Empire, as 18th century gazetteers make plain. 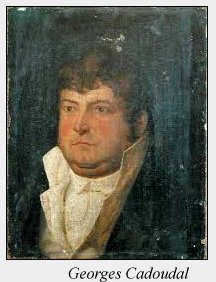 Cadoudal Georges Cadoudal (1771-1804) was a Royalist conspirator involved in resistance to the French Revolution. He was executed in Paris in 1804 after an abortive plot to depose or assassinate Napoleon.

ladies from the Fauberg presumably the women of the revolutionary quarter, the Fauberg St-Antoine.

Petiot Perhaps a garbled allusion to Jerome Petion de Villeneuve, 1756-94) a moderate Revolutionary, elected Mayor of Paris in 1791, who committed suicide after the overthrow of his party by the Jacobins.

Le Petit Denisot Perhaps a cafe named after its proprietor.