Handwritten letter in verse in the Library of Congress to Edith Macdonald, dated 12 June 1883.
Edith Macdonald was the youngest of his mother’s family (born in 1848) and remained unmarried. She was one of Kipling’s chief confidantes in his schooldays and he continued to write to her from India (normally in prose).

In June 1883 Kipling was experiencing his first Indian hot season. The poem is a semi-jocular account of how he got through it, proud of his endurance. 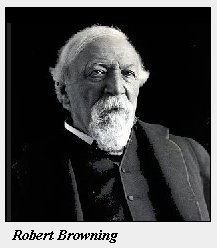 This poem is clearly based on Browning’s monologue “Up at a Villa – Down at the City: By an Italian Person of Quality” (‘If I had plenty of money – money enough and to spare/ The life for me, no doubt, were a life in the market square’). It’s not only got the same metre and rhyme, and even echoes the last line– “Oh a day in the city square, there is no such pleasure in life” – it describes life in India with a mixture of detail, wryness, irritation and longing of its Browning original.

But it’s not just pastiche exactly, it’s more like a riff – and a fine poem in its own right. And it shows how fruitful RK’s poetic ’apprenticeship’ to Browning was. [J.M.]

It is interesting to speculate whether Rudyard had his Browning with him in Lahore, or relied on his father’s library, or simply on his own capacious memory. 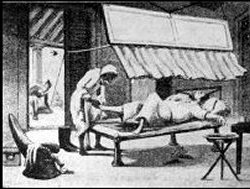 punkah a large swinging cloth used as a fan, pulled backwards and forwards by a servant.(left)

[Line 24] Pater Father (Latin). Kipling was living at home with his father and mother in Lahore.

[Line 30] station theatricals by Christmas 1883 Kipling was acting with the Lahore Amateurs, to favourable reviews. See the poem “Preadmonisheth Ye Ghoste of Desmarets”.

[Lines 39-44] Kipling had used these lines before (with some changes of tense) in his earlier poem “A Morning Ride”.

[Line 51] Joe his pony. This time he is riding, not driving his cart.

[Line 53] Wazirabad or Bunnoo (usually Bannu) places in the Punjab where Joe might have been foaled.

[Line 74] “two hundred a month” rupees, not pounds. Kipling had started on r125 a month, increased to r375 after a year. See our note on ‘five-fifty’ in his earlier poem “From the Hills”.