This poem was published in the United Services College Chronicle (no. 5), of which Kipling was the Editor, on 23 July 1881, when he was fifteen years of age. It was not subsequently collected by Kipling.

It has since been collected in:

The poem is a lament for the banning of cooking in studies at United Services College, as announced in the notice which heads the poem. Prefects, the senior boys responsible for discipline in each House, were excused from the ban, and could be relied on to enforce it on their juniors. Kipling and his two study-mates were no longer able to light up their kettle to brew up tea or cocoa or coffee, or make toffee or junket, a sore deprivation, lowering to the spirits. 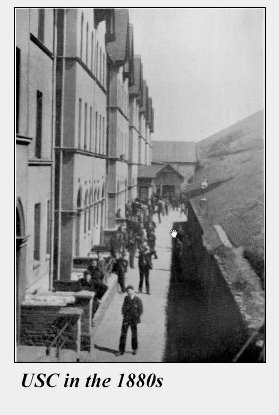 Kipling was sent to United Services College at Westward Ho! in Devon in 1878, at the age of twelve. As he recounts in Stalky & Co. (1899) it was a hard life for a small boy, with a good deal of bullying, and beatings as punishment. However, he made a close alliance with two other boys, Dunsterville (‘Stalky’) and Beresford, (‘Turkey’), as recounted in the ‘Stalky’ stories, in which Kipling is called ‘Beetle’. The three of them stood together against adversity, shared Number Five study, and remained friends long afterwards. The ‘studies’ were tiny rooms, which gave the older boys some space of their own, a rare thing in an English boarding school. To be denied the chance to ‘brew up’ in their sanctuary was a serious matter.

The precise date suggests that the banning order is genuine. Feasts in studies are obviously great occasions: two are mentioned at length in ‘Stalky’ stories, and in both cases the menu is given in detail and the source of the money to pay for them is specified. See “Slaves of the Lamp Part 1” in Stalky & Co. p.44, and “The Satisfaction of a Gentleman” in The Complete Stalky and Co. p. 376.

In the latter, a member of the Board of Directors visits the College, smells escaping gas, and tracks the leak to Number Five study, where he finds ‘a glorious brew laid out on the table, and the tube from the gas-jet to the stove!’ He lectures the Head on the theft of gas and says the brew shows that the boys didn’t appreciate their lawful food.

Beetle in the story says ‘We can’t live on the muck they give us’, and in Something of Myself (p.23) Kipling comments ‘our food would now raise a mutiny in Dartmoor’ – Dartmoor being one of the harshest prisons in England. If such an official visit actually occurred, it might well have resulted in a School Order such as that quoted as the occasion of the poem.

The poem is a parody of Swinburne’s “Dolores”. Kipling names Swinburne among the poets whose works he admired and copied (Something of Myself p.34) though he doesn’t mention this particular poem. J M S Tompkins (p. 223) calls Swinburne ‘one of Kipling’s many masters in metre and a star of his morning.’

See also our notes on “Darze’s Chaunt”, another Swinburne parody.

de Profundis Latin for ‘Out of the Depths’, is a cry of misery taken from Psalm 130.1: ‘Out of the depths have I cried unto you, O Lord.’

Bitternesse old-fashioned spelling to fit the style of the poem.

heaviness, nausea, and night They used to gorge so much that they woke in the night with indigestion. Now, on their enforced diet, they sleep soundly.

Let them feast upon Beauty … Our fetish is Food Some may find beauty satisfying, but we are obsessed with food.

fetish an idol, to be worshipped.

The taste on the tongue … The physical pleasures of eating.

These be Gods referring back to the Fetish in the previous verse.

Oleaginous, cramped and confined Oily and squeezed together in the tin. A delightful description of a tin of sardines.

the kettle hath ceased from its bubble,
And saucepans are useless as such Their treasured stove and cook-ware are useless now..