This poem, which is listed in ORG as No 623, was first published with the story ‘Rikki-Tikki-Tavi’ in the St. Nicolas and Pall Mall Magazines on November 1st 1893.

This is the song that Darzee the tailor-bird sings in praise of Rikk-tikki-tavi, the heroic mongoose, who has been victorious in clearing a bungalow and garden of venomous snakes. See our notes on the tale. Earlier in the story Darzee has sung a sorrowful song because one of his fledglings has fallen out of the nest, and been eaten by Nag, the big cobra. Later in the tale Darzee’s sensible wife helps Rikki-tikki by distracting the female cobra, Nagaina. The female of the species is more deadly than the male, because of her eggs, but Rikki destroys the eggs before they can hatch. He bravely chases her down her hole, and slays her under the ground.

Jan Montefiore notes that this poem has strong echoes of “Hertha” by Swinburtne. in which the first stanza runs:

I am that which began;
Out of me the years roll;
Out of me God and man;
I am equal and whole;
God changes, and man, and the form of them bodily; I am the soul.

And ‘Death in the garden lies dead’ in stanza 2, is very nearly a quotation from the ending of Swinburne’s ‘The Forsaken Garden’:

Here now in his triumph where all things falter,
Stretched out on the spoils that his own hand spread,
As a god self-slain on his own strange altar,
Death lies dead.

It occurs to me now that ‘The Forsaken Garden’ is rather apt in this context, as Darzee’s garden might well have been forsaken if Nag and Nagaina had had their way. [J.M.] 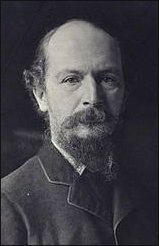 Algernon Charles Swinburne (1837-1909) was an English poet, playwright, novelist, and critic. His poems have many common themes, in particular the Ocean, Time, and Death. His verse was much admired by Kipling from an early age, and there are many echoes of it in his works over the years. 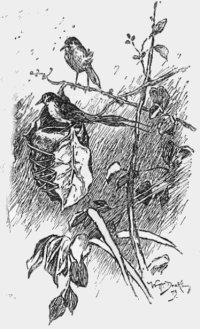 Darzee is the common tailorbird (Orthotomus sutorius) a songbird found across tropical Asia. Known for its nest made of leaves “sewn” together, it is a common resident of urban gardens in India.

Chaunt is an old spelling of ‘Chant’ meaning to say or sing a phrase continuously.
In his Notes on the story Alan Underwood believes Kipling used the archaic form to make fun of Darzee’s rather absurd character.

lilt a pleasant rise and fall of the voice when speaking or singing.

Bowing a courteous inclination of the body as a mark of respect. It rhymes with ‘ploughing’.

nightingale words The nightingale (Luscinia megarhynchos) ,is well known for its powerful and beautiful song, so can well be associated with pleasant speech.

(Here Rikki-tikki interrupted, and the rest of the song is lost)

Thus, according to Kipling, Darzee is cut short after four verses, as Samuel Taylor Coleridge was interrupted by the ‘Person from Porlock’ while composing Kubla Khan in 1797. Some maintain Coleridge merely ran out of inspiration as the effect of the laudanum wore off, and so invented this imaginary caller. It is not clear why Kipling uses this device here. Perhaps he felt Darzee would have started to repeat himself