There is a musical version by Peter Bellamy here

The soldier tells, in a resigned and matter-of-fact manner, how his regiment is suffering from cholera and the steps being taken to maintain morale; the spelling indicates an uneducated accent.

See Brian Mattinson for musical settings of this poem.
Charles Carrington (p. 212) notes that this was one of a group of further Barrack Room Ballads written while Kipling was in Vermont. He comments:

No author, in any literature, has composed, in verse or prose, so full and varied and relentlessly realistic a view of the soldier’s life, with its alternations of boredom and terror, its deadening routine, its characteristic vices and corruption, its rare glories and its irrational fascination…

Cholera is a bacterial disease which we now know is usually spread through contaminated water, which causes severe diarrhoea and dehydration. Left untreated, it can be fatal even in healthy people. It was not uncommon in 19th Century London, and rife in India in Kipling’s time. Some 25 million people are estimated to have died in India from cholera between 1865 and 1917.

It was thought to be caused by “bad air” or a chill in the stomach, hence the “cholera-belt” a strip of red flannel or wool worn round the stomach to keep it warm. See “The Daughter of the Regiment” (Plain Tales from the Hills) and “Only a Subaltern” (Wee Willie Winkie)

In Kim, Chapter 12, the Lama believed that the dung of a black horse mixed with sulphur and carried in a snake-skin was a remedy for cholera.

Band a very important part of the regiment – see “The Drums of the Fore and Aft” (Wee Willie Winkie) and “The Soul of a Battalion” . Why this band is referred to as ‘she’ is not clear as it would then have been an all-male organisation like the rest of the regiment.

company a sub-division of a Regiment, some 120 men, here much reduced by sickness

eight file sixteen men when fallen in on parade. The front-rank man and the man behind him Soldiers were counted in couples like hounds.

banjo a stringed instrument with a long neck and a circular sound-box played with the fingers. Popular with young men who liked to entertain their fellows. See “The Song of the Banjo”. 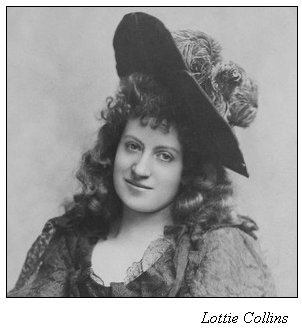 Ta-ra-ra Boom-der-ay Ta-ra-ra-Boom-de-ay, a popular music-hall song with a particularly catchy tune made famous by Lottie Collins. See Andrew Lycett (pp. 188-9) for Kipling’s interest in the music-hall when he lived opposite Gatti’s Music-Hall in Villiers Street alongside Charing Cross station, just off the Strand in London.

He does not seem to have cared much for the classics but enjoyed lighter music at music-halls with his son John. He would often walk humming a hymn-tune when composing verses. See the verse “A Recantation”, “The Village that Voted the Earth was Flat” (A Diversity of Creatures) and “My Great and Only”.

padre Father from the Latin pater. Priests are so addressed in the armed services and Rudyard so refers to his father, Lockwood Kipling. It is also the title of Arthur Ankers’ book about Lockwood, The Pater

Father Victor a priest of the same name appears in Chapter 5 of Kim. He is Roman Catholic, and a much more sympathetic charactern then his opposite numerfrom the Church of England.

‘elped helped – in this context served, helpings of food.

the flies  the guy-ropes that hold the outer ‘flysheet’ of a tent. [D.H.]