In October 1889, Kipling arrived in London after his return from India, and on the 23rd he arranged to take rooms in Villiers Street. In Chapter IV of his autobiography Something of Myself (pp. 79-80), he describes how:

… I had found me quarters in Villiers Street, Strand, which forty-six years ago was primitive and passionate in its habits and population. My rooms were small, not over-clean or well-kept, but from my desk I could look out of my window through the fanlight of Gatti’s Music-Hall entrance, across the street, almost on to its stage. The Charing Cross trains rumbled through my dreams on one side, the boom of the Strand on the other, while, before my windows, Father Thames under the Shot Tower walked up and down with his traffic.

In a diary-letter to Mrs Edmonia Hill on 15th November 1889, he recorded that he had ‘dined at the Italian restaurant and after dinner concluded to go to Gatti’s Music Hall’ . On 16th November, he ‘…wrote for the C&MG a thing called “A Legend of Great Honour”—an exposition of Music Halls’ (Letters 1, page 366). Thus, the basis for the events described in “My Great and Only” must have occurred between late October 1889 after his arrival in London and mid November 1889 when the story was completed and despatched to India.

The story describes how the narrator (Kipling) sampled the London theatrical offerings, then the music halls, studying their customers, much as he used to do in his peregrinations in India. He chose one hall, and out of his many visits ‘was born the Great Idea’, which was to write a song:

I spent a penny on a paper which introduced me to a Great and Only who “wanted new songs”. The people desired them really. He was their ambassador, and taught me a great deal about the property-right in songs, concluding with a practical illustration, for he said that my verses were just the thing and annexed them.

The song was “That’s what the girl told the soldier”, aimed at the redcoats who frequented the hall, and Kipling worked with the Great and Only to devise some appropriate business:

It was long before he could hit on the step-dance which exactly elucidated the spirit of the text, and longer before he could jingle a pair of huge brass spurs as a dancing girl jingles her anklets. That was my notion, and a good one. Whilst, the conductor, who advertised that he “doctored bad songs,” had devised a pleasant lilting air for my needs.

But, there is competition – appearing before the Great and Only on the bill was:

one who was winning triple encores with a priceless ballad . . . “We was shopmates—boozin’ shopmates.”

This was lauded by the ‘billycocks’, civilian clerks and shop assistants, and dreaded by Kipling. However, all goes well on the night and:

as I looked across the sea of tossing billycocks and rocking bonnets, my work, as I heard them give tongue, not once, but four times … I felt that I had secured Perfect Felicity. 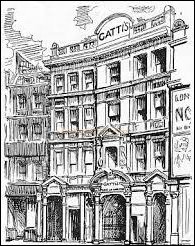 Dealing first with bricks and mortar, Gatti’s in Charing Cross opened in 1867 and was described variously as ‘in the Arches’, ‘Villiers Street’, ‘Charing Cross’ and for a short period from 1883 as ‘The Hungerford’. It was part of the brick arches which level and support Charing Cross Railway Station.

There was also another Gatti hall at 214 Westminster Bridge Road which opened in 1865, described as ‘in the Road’ or ‘Gatti’s Palace of Varieties’. The two establishments tended to share at least some of the same artistes, and were not too far distant if one crossed the Thames by the Hungerford footbridge. This Gatti’s was destroyed in the 1940-41 blitz.

Kipling writes that the hall held ‘four hundred “when it’s all full, sir” ’, which does look a believable number for Gatti’s at Charing Cross. In 1945 it was described as ‘a 300-seat theatre’ which, together with the standing and promenading customers likely to be present in 1889, would approach a capacity of 400. On the basis that one tends to frequent the most convenient enjoyable place of entertainment, Charing Cross is the most realistic setting for the story.

Each issue begins with advertisements by artistes giving their expected performing locations, sometimes mentioning songs with which they have had successes, and advertisements by theatrical agents. These are followed by the body of the paper, usually some squibs on particular events in various halls, then perhaps a review of one hall, a note about a forthcoming benefit performance, and ending with a series of advertisements for the various music halls. Both the Gatti halls were regular advertisers. This publication is one of the main sources of the information used in this article. Unfortunately, no advertisements were found for artistes who “wanted new songs”, nor in its competitor, The Entr’acte, also priced at one penny. A third potential source, The Era, was priced at sixpence and so was excluded from further searches.

The key item needed to identify the facts behind the story is the presence of two male singers on the same bill, one to sing “Shopmates” and the other, later in the bill, to sing “That’s what the girl told the soldier”. Using the Gatti Charing Cross advertisements as a source from the MHT issues dated 5 October to 16 November, the following artistes were employed:

Harry Anderson was best known as a singer of convivial songs (“Glorious Beer” is one of his). Bowman and Watkin seem to have sunk without trace. Leo Dryden became best known for colonial and patriotic songs including “The Miner’s Dream of Home”. Charles Ross had been at The Gaiety Theatre in the Strand for the first part of 1889 in “Faust-up-to-date”, an early George Edwardes burlesque composed by W Meyer Lutz. Ross was advertising an item “She’s a real good mother” by Joseph Tabrar at the London Pavilion, South London and Gatti’s Charing Cross Halls in November that year. James Fawn achieved immortality with “Ask a P’liceman” which he was singing in 1889 and after.
In 1889, Leo Dryden placed a series of advertisements for himself in MHT, which listed the songs that he was currently singing. On 19th October, he listed “Shopmates,” parody on “Shipwrecked”. This was repeated on 26th October with the rider ‘“a terrific success” – ‘Oliver and Healy’ (who were his agents!). On 16th November, he listed “Twixt Love and Duty” (C. Williams), “Shopmates” and a parody on “Feniculi Fenicula”.

Thus: ‘the man winning triple encores with a priceless ballad beginning deep down in the bass: “We was shopmates—boozin’ shopmates” must have been Leo Dryden. “Shipwrecked”” was also known as “Shipmates”, a Victorian parlour ballad published in 1885 with words by F.E. Weatherly and music by Stephen Adams [British Library Pressmark H.2404 (16). ] A sense of the original can he gleaned from a few lines:

If there was to be a “Great and Only” on the same bill, then the weeks beginning 2nd and 9th November look to be the key ones, with Charles Ross or James Fawn the most likely candidates.

In the MHT of 23 November there is a one-column review of the show at Gatti’s, Charing Cross. The artistes mentioned are the same as those advertised in the 9 November edition, with one addition who is listed in the bill for the following week. This review tells us the order in which the artistes appeared, and also something about their turns. In this list, Leo Dryden appeared in fourth place, and was followed in sixth by Charles Ross while the eighth turn was James Fawn.

To quote from MHT:

“Twixt Love and Duty,” Leo Dryden has his hands full, to say nothing of his voice, which is equally full . . . Charles Ross, of Gaiety fame, so well known as the “Dainty Champion,” secures rounds of applause by the rendering of his new characteristic song entitled “She’s a real good mother” . . . James Fawn wants to know who cuts the policemen out? Why the soldier whom Fawn impersonated to the very life. He does like to be in the know, you know, equally so with his hearers, who would willingly sit out a whole night with him if he’d keep them “in the know” all the time, but James must draw the line somewhere, so he draws it at Gatti’s.

Kipling had this to say about ‘my Great and Only’:

I glanced at the gallery—the redcoats were there. The fiddle-bows creaked, and, with a jingle of brazen spurs, a forage-cap over his left eye, my Great and Only began to “chuck it off his chest.” Thus:

“At the back o’ the Knightsbridge Barricks,
When the fog was a-gatherin’ dim,
The Lifeguard talked to the Undercook,
An’ the girl she talked to ’im.”

The song may not be the same, but James Fawn’s costume most certainly is.
From the descriptions of his act, none of which mention any songs about soldiers, it is thought most unlikely that Charles Ross was “my Great and Only”. James Fawn was also appearing at the Alhambra, and a review of his act at that hall says:

Mr James Fawn has a pendant to his “P’leeceman” delineation; but the military sketch does not at present reach the level attained by that admirable representation of the member of the force. (The Entr’acte – Alhambra review, 23rd Nov. 1889)

Mr James Fawn is under engagement here just now, and is trotting out his humorous gifts to the delight of his audience, who cordially applaud his three songs.

Roger Lancelyn Green in the ORG notes that the only “turn” mentioned in The Stage of the period which might be Kipling’s contribution is described on 22 November 1889 as being performed at the Cambridge (different halls had notices in turn):

Peter Keating in Kipling the Poet (p.65) comments that:

Jacqueline Bratton has argued that this song [“That’s what the Girl told the Soldier”] was probably an adaptation of a James Fawn music-hall favourite of 1889, “The Soldier”. (Proceedings of the British Academy, 1978).

The probability that James Fawn was ‘my Great and Only’ is enhanced by a reference to him at the end of “The Army of a Dream—Part II” and a song about “The Guardsman!” (Traffics and Discoveries): Why, that’s one of old Jemmy Fawne’s songs. I haven’t heard it in ages.

Andrew Rutherford in his Early Verse by Rudyard Kipling 1879-1889 included extracts from this story and commented in it that:

Kipling defends the music-hall song as a popular art form conveying ‘basic and basaltic truths’ about human nature, and gives a fictional account of his own experiment with the genre – fore-shadowing the Barrack Room Ballads on which he was to embark early in 1890.

Perhaps truth, perhaps fiction; but, truth or fiction, this is where the inspiration for the ballads comes from, and their execution recalls the technique of the old music-hall.

Peter Keating (pp.64-68) gives a most coherent analysis of the story and its significance to Kipling’s art. :

…Villiers Street provided him with the crucial experience of music hall. The evidence of some of Kipling’s early poems, written while he was still at school, indicate a familiarity with music-hall songs long before he visited Gatti’s, and while in India he would have heard the more popular songs at entertainments organised by the Anglo-Indian community … Like the narrator of “My Great and Only”, Kipling took to heart the lessons that music hall had to offer him, and then distanced himself from it … His personal connection with music hall was brief, but to the end of his life he retained an interest in it that was essentially historical, regarding the music-hall songs of the second half of the nineteenth century as an irreplaceable source of information about “the national life”.

A Brief Biography of James Fawn