This script for passages for a light opera was published in the Civil and Military Gazette (CMG), on 16 September 1885, with the signature ‘R.K.’ and the subheading ‘As recently performed with qualified success at Simla.’

It was never collected in Kipling’s published works but included in one of his own scrapbooks of his press cuttings in the Kipling Papers at the University of Sussex, and is listed in Kipling’s Diary for 1885, in Something of Myself and other autobiographical writings ed. Pinney (p. 217), under “The Year’s Odd Work”.

This parody of Gilbert and Sullivan (cf. their title “Trial by Jury”) was occasioned by the appointment of an Indian barrister, Pundit Ram Narain, to be a judge of the Chief Court of the Punjab. The CMG had argued editorially, not against the individual and not against the appointment of an Indian as such, but against the positive discrimination involved in the Lieutenant-Governor’s preference for a native candidate over better-qualified Europeans. The appointment was announced in Simla on 9 September and reported in the CMG on the 10th. Kipling must have dashed off his piece during the following week. It takes the form of a libretto, complete with stage directions.

In the last quarter of the 19th Century W. S. Gilbert and Arthur Sullivan had created a peculiarly English style of comic opera, with a series of productions at the Savoy Theatre in London.

They were phenomenally successful and much loved, making outrageous fun, with wit and irony, of solemn British institutions, the Royal Navy, the Bar, the Peerage, the Yeomen of the Guard. They are still occasionally performed to this day.

Kipling knew Gilbert and Sullivan’s works from his school days, when the College was ‘severely infected’ with HMS Pinafore and Patience (“The United Idolators”), and had parodied Gilbert earlier in “Duet from the Pinafore”. He also had some theatrical experience, from playing Widow Twankey in a school pantomime (“Slaves of the Lamp” Part I) and some success with the Lahore Amateurs (see “Preadmonisheth Ye Ghoste of Desmarets” ); he was well conversant with stage directions.

Kipling’s text is unashamedly partisan, strongly against the appointment. It opens with the new judge stressing his long experience and qualifications; furthermore, he is an Aryan, of an honourable North Indian people. The bench of existing judges express their confusion and uncertainty in the face of the Lieutenant-Governor’s decision, which they are dubious about. Is he suggesting that they are incompetent ? They realise that Aitchison is insisting on the principle of advancing Indian judges, and he insists on this, uncompromisingly. He believes that Pundit Ram has the necessary experience to do the job, and he would do the same again. The Liberal principle of Indian advancement is paramount. He is supported by Indian opinion as expressed in the rather impoverished Indian newspapers, and he believes firmly that this is the future.

This was one of Kipling’s theatrical excursions seeking to make political points in a light-hearted fashion. “The Indian Delegates” in November 1885 satirised the mission to England of delegates from the leading Indian associations, seeking to influence opinion in favour of their hopes for a greater role in government; “Parturiunt Montes”, in April 1886, satirised the fuss being made over a report of the Finance Committee of the Indian Government; and “The Masque of Plenty” in October 1888, attacked a Government Commission which had delivered a report on the conditions of the Indian peasantry and found no cause for concern, despite drought and famine in several regions.

Aryan These days the term ‘Aryan’ is used by language specialists to refer to the Indo-European group of languages. In the 19th century it was used to refer to the Indo-Iranian peoples of Iran and Northern India. In Sanskrit, the classical language of Hinduism, ‘Aryan’ means honourable, respectable, noble, and was thus a source of pride in Kipling’s day. In the 20th Century it fell out of fashion as a definition after being appropriated by Nazi racial theorists.

I am an Aryan judge A direct parody from the Savoy Opera “The Pirates of Penzance”:

Pas Legislatif a dance step suitable for a legislator (Kipling’s own invention).

pan a preparation of betel leaf and nuts or tobacco, chewed by many people in South and South-East Asia for its health-giving properties. Also used in religious festivals and ceremonies. 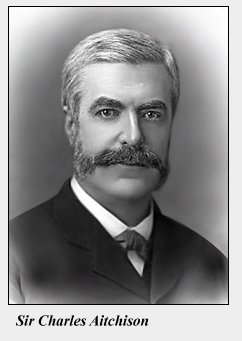 Sir C——s Sir Charles Aitchison, Lieutenant-Governor of the Punjab, 1882-87. He was a staunch advocate of the policy of advancing natives of India in the public service as they proved their fitness for higher posts and more responsible duties. (Dictionary of National Biography.)

P———b G———e The Punjab Gazette, in which official appointments were announced.

pice copper coin of very small value, 192 to the rupee.

Thomas A. A private soldier, from “Thomas Atkins”, the name used in the 19th century to represent a typical private in specimen Army forms. The origin of the use of “Tommy” as slang for a private soldier. cf. “Tommy” in Barrack Room Ballads.