A man and woman suddenly find love on Jakko Hill, a favourite ride at Simla mentioned in many of the Indian stories and find it was merely transitory, inspired by proximity, the euphoria of being on leave in a pleasant climate and the lack of any other pursuit.

The young Kipling, enjoying life in India, seems to have fallen in and out of love with various girls – some recorded in Carrington’s Chapter IV, “Lahore and Simla“, but the romances, for one reason or another, came to nothing. See “The Lovers’ Litany”, and—for a female point of view— “My Rival”, where a girl (who may well have been Trix, his sister), bemoans her fate in that an older woman (who may well have been Alice, his mother) attracts the attention of all the young men. For more on this theme, see tKipling’s Mrs. Hauksbee stories and his other verse of this era, and Roberta Baldi’s notes on “To the Unknown Goddess” and other Departmental Ditties.

A ballade is a formal verse-form, usually with three eight-line stanzas, the last line of each being a refrain followed by a four-line stanza as an Envoi; this ballade has three stanzas of eight lines. See also “A Ballade of Burial”.

One could say that these verses are experimental. Certainly in these ditties as Kipling very properly called them, he would seem to have been trying his hand at at many forms: the ballad; the ballade as in those “Of Burial” and “On Jakko Hill”… the Browning sort of monologue as in “One Viceroy Resigns”.

strait in this context narrow, an archaic usage.

until Death fidelity an echo of “The Form of Solemnisation of Matrimony” in the Anglican Church’s Book of Common Prayer, when the Bride and the Groom each recite the vow: I … take thee … to my wedded wife / husband, to have and to hold from this day forward … till death do us part. 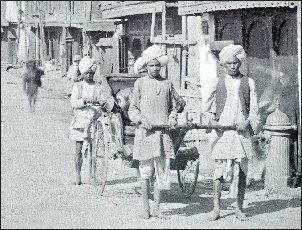 programme in this context the booklets issued to ladies and gentleman at a ball so they can arrange to dance together – see “Mrs Hauksbee Sits Out“.

L’envoi one or more verses at the end of a poem seeking to convey the moral, addressed to a particular person—usually a Prince—as in old French poetry.

Love and Leave perhaps a play on words incorporating the old male saying “Love ‘em and leave ‘em”, or simply the tendency of Leave (holiday) and Love to go together. The poet, in a final dying fall, suggests that both are as fleeting as the mist.
Roger Ayers writes: My view is that the whole poem is based on the social situation at the time—the women, without their husbands, escaping to the Hills from the heat of the plains for a whole season; the men only released for a brief leave, hence ‘love’ is over when leave is over.