Edward Clay, aged twenty-four, who has served his six years with the colours, finds himself unemployable because the only trade he knows is soldiering, and for some reason he could not or did not sign on for further service, and was discharged. He changes his name to William Parsons and re-joins. A few men suspect he has served before but turn a blind eye. Back in the army he feels at home again.

This poem was written in Vermont, some five years after Kipling had left India, as Angus Wilson notes (p. 183):

The Vermont years … produced some fine verses, especially the continuation of the army poems in the second lot of Barrack Room Ballads. These still echo India, though in at least two there is a sharp rebuke to what he had seen in England of the neglect of the ex-soldier who had fought for her.

The two poems mentioned are this one and “Shillin’ a Day”., although Wilson is incorrect in assigning the latter, written in 1889 when Kipling was living iu London, to the Vermont years. After quoting from them he continues:

Kipling’s radicalism was still strongest when it came to civilian treatment of the army. And so was his sense of man’s desolate lot. There is no doubt of Kipling’s personal happiness in those first Naulakha years (1893-94) in his wife, in his baby girl, in the affairs of the farm, in the unfamiliar wild flowers and birds, in physical exercise – driving and snow golf and fishing – in his growing but happily distantly heard fame. Yet two of the best of these late Barrack Room Ballads offer sad alternatives to men.

And he goes on to quote from “The Sergeant’s Wedding”, and “The Ladies”.

ticky ulster A louse-infested (ticky) overcoat, made from wool produced in Ulster, the northern province of Ireland. A respectable garment, though this one had fallen on hard times, hence the lice. In the first edition of The Seven Seas the word is ‘lousy’. 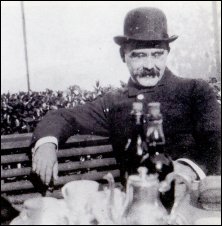 billycock ‘at A (usually) black stiff felt hat for men, ladies sometimes wore them in riding costume, known in the United States as a Derby. Believed to date from 1849 but the name of the inventor is not known for certain. Kipling wears one in this picture.

goose-step originally a British drill in which one leg at a time was swung back and forth without bending the knee, and later applied to the March step used in the German and other armies.

fourpence Not a large sum, about a tenth of the wage of a labourer at that time.

‘orficers officers, with superior education and background would probably have good prospects and might even inherit titles and estates, like The Infant in “A Conference of the Powers” and “The Honours of War” . This was a time when the main careers open to a gentleman who did not or could not stay at home on his estate, were the Army, the Navy, the Church, or the Bar (as a barrister), or for a few medicine and the sciences.

“reserve”  I think this means that the only trade Mr Clay has learnt is to be in the Reserves, ready to be called up in case of war. [D.H.]

right-about-turn In going through the turnings, the left heel must never quit the ground; but the soldier must turn on it as a pivot, the right foot being drawn back to turn the body to the right, and carried forward to turn it to the left. The present-day five stamping movements were introduced in the 1914 War when recruits did not have the time to learn the rather difficult footwork. (the Drill Manual of 1877. R C A)

a quarter in this context three months

dress when I ‘alt when a marching party of trained men is given the order ‘halt’ they automatically arrange themselves in a straight line, the correct distance apart. This shows he had done it before.

Shun ! ‘Atten-shun’ i.e. ‘Attention’. The order given sharply to bring a squad / company, parade etc. to the position of Attention, with each soldier standing erect and looking his own height, if unarmed, both hands at the side with arms straight, the fingers lightly clenched and the thumbs in line with the seams of the trousers. Heels together and feet at 45°. 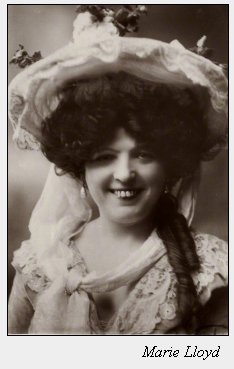 winked the other eye an expression in a song sung by Marie Lloyd, (1870-1922) actress and comedienne, a famous music-hall star who might have been the original of Vidal Benzaguen the enchanting actress in “The Village that Voted the Earth was Flat”.

See also “A Recantation”, (A Diversity of Creatures) and “Dayspring Mishandled” (Limits and Renewals). The wink is a secret signal where one eye is closed with or without contortions of the face, ‘winking the other eye’ seems to indicate ignoring something

‘Peace, be still ‘ The words with which which Jesus subdues the storm as described in Matthew, Chapter 8.

slops in this context, clothing.

swagger-cane a short and elegant cane with a silver top, often incorporating the regimental badge, then carried for walking out..

Hoe A pleasant public open space by the sea at Plymouth, in Southern England, where legend has it Francis Drake played bowls before his defeat of the Spanish Armada in 1588. See “Simple Simon” (Rewards and Fairies) for Drake, though not the bowls story.

learnin’ the others passing on his knowledge to recruits. Mulvaney was so employed. See “The Incarnation of Krishna Mulvaney” in Life’s Handicap.