The narrator is driving from Grantham to London, via a university town, presumably Cambridge. He is carrying an eiderdown quilt in which presents in the shape of various bottles etc. are wrapped, tied to the back of his car. He dines in a college with a soldier friend, Lettcombe, a survivor of the Great War, now in the film industry, with ambitious ideas – mostly inspired by the college Madeira – which the narrator, in mischievous mood, encourages.

At night, on the drive towards London, the eiderdown breaks free and falls into the road where it is run over by a following car containing two undergraduates named Phil (who was driving) and Bunny, on their way to a dance in London. Phil thinks that he has run over and killed a woman – a belief encouraged by Bunny and the narrator.

There are various verbal encounters with lorry-drivers and others, until their erratic driving attracts a young policeman who wonders what is going on. Phil confesses to having killed a pedestrian but the policeman, realising that he is drunk, ignores him, and goes to seek the assistance of his sergeant.

There are further encounters with lorries as dawn breaks. The sergeant appears, and is distracted from his investigation by Lettcombe (briefed on the joke by the narrator) who convinces the police that they are making a film with famous actors. Bunny gets the damaged eiderdown out of the dickey-seat of their car and shakes it violently so that a snowstorm of feathers, broken glass and various sticky substances blow all over the policeman and Phil, who are virtually tarred and feathered. They drive off, reaching their destination just as the dancers are leaving. But Doris, the girl Phil was hoping to meet, fails to recognise him under his coating of feathers.

There are several in Plain Tales and then they continue with
“Brugglesmith” (Many Inventions) … and “My Sunday at Home” (The Day’s Work) … “Aunt Ellen”, and perhaps “The Miracle of St. Jubanus” (later in this volume). It was Kipling’s belief that laughter is a healing process – and few would quarrel with this if the laughter is good-humoured. There are stories in Kipling where this is hardly so, where the laughter comes because revenge has been carried out successfully … In the pure farces the laughter is not usually malicious … It is still the schoolboy we meet, writing better as he gets older, becoming a little more restrained, but still a schoolboy.

In her Chapter 2, “Laughter” Dr Tompkins considers this and similar stories, observing (page 33):

Sooner or later in these tales, we reach the moment of physical disorder, the inversion of human and official dignity, surely the oldest and most proved of the sources of laughter…

Dr Tompkins goes on to look at “The Vortex” (A Diversity of Creatures), “My Sunday at Home” and other humorous stories.
C A Bodelsen (page 7)
believes this is one of several ‘farcical’ tales where Kipling:

…puts much of his usual reticence aside and tells the reader more about his private feelings, hopes and disappointments than elsewhere; but chiefly because, in contrast to the run of his farces, their real point is not the sequence of fantastic happenings that constitutes the action, but a spiritual experience which they are an attempt to express, and which is akin to that for which he uses the phrase ‘the night got into my head’ in Something of Myself (p. 53).

Bodelsen suggests (p. 13) that: ‘the use of a macabre subject for comic effect probably owes something to R. L. Stevenson’s The Wrong Box. [See the notes in this Guide on “The Vortex” in A Diversity of Creatures page 386 line 18] Dr Bodelsen continues (page 14) with the thought that:

… this story is nor really “humorous” but “comic”… The writer’s attitude to the bizarre events is of an oddly private kind and the reader may find it difficult to share it … Laughter, (he continues on page 26) is a means of revenge or retribution as in “Little Foxes” (Actions and Reactions), and The Village that Voted the Earth was Flat” (A Diversity of Creatures) where an obnoxious character is humiliated by the derisive laughter of a large crowd, does not belong to the present theme.

Hilton Brown, writing in 1945 (with what this Editor sees as a laughably superior attitude and lack of humour), comments (p. 148):

Kipling’s idea of a joke was robust fun for robust folk and those with a taste for the more delicate shades of drollery would be well advised to avoid his deliberately humorous stories. They are not perhaps for adults. Humour was the one sphere of Kipling’s work in which his Pannishness persisted to the end, in which he never grew up.
“Aunt Ellen” is as fourth-form as the two or three Plain Tales on which it is based. There is nothing that can be profitably be written on this subject; it is fundamentally a question of taste and therefore outside the field of argument.
[‘Pannishness” here does not refer to Pan, the mischievous half-goat, half man of Greek legend, but to Peter Pan, “ the little boy who never grew up” in the play of the same name (1904) by Sir James Matthew Barrie (1860-1937). This Editor cannot resist a chuckle now and again at the story, and another one at poor old Brown!; Ed.]

Marghanita Laski (p. 180) likes “The Wish House” and “Dayspring Mishandled”, but goes on to say:

But there were some embarrassingly determined farces too; “Aunt Ellen” about an eiderdown, and “Beauty Spots” about a pig, and both on the old theme of humiliation. 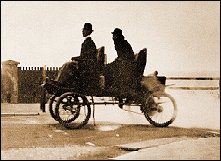 He is believed to be the passenger in this vehicle being driven along the front at Brighton in 1902 in plate 67 of Angus Wilson’s biography, following page 274.