[Title] The Vortex a whirling motion that engulfs one irresistibly.

[Page 381 line 5] our great and growing Dominions The Imperial Conference of 1907 was the first time the self-governing colonies of Canada and Australia would be referred to together as ‘Dominions’. Two other self-governing colonies, New Zealand and Newfoundland, were also granted the title that year. They were followed by South Africa in 1910.

[Page 381 line 13] a white waistcoat and spats…a little rounded, perhaps, at the edges Penfentenyou was a little overdressed and had put on a bit of weight. A spat is a short gaiter covering the upper part of the foot, worn over the shoe.

[Page 384 line 5] ‘Wait upon the Event!’ wait for the retribution that Mr Lingnam was bound to suffer, as he does at the climax of the tale.

[Page 384 line 28] tetanic gears tetanus is a disease which causes muscles to go into spasm and contract. The gearbox on the car was jerky, and had a tendency to stick.

perpetual palsy the car quivered and shook all the time the engine was running.

[Page 385 line 12] he would prefer to be inside It was, in fact, an open car. Mr Lingnam preferred to sit in the back so that he could talk to the others. They wore goggles against the dust. 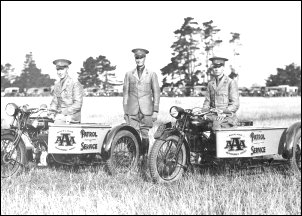 On June 29, 1905 a group of motoring enthusiasts had met at the Trocadero restaurant in the West End of London for the inauguration of the AA, formed to help motorists avoid police speed traps.

By 1906 the AA was taking a stand on road safety issues, and erected thousands of roadside warning signs. In 1908 they published the AA Members’ Special Handbook, a list of nationwide agents and mechanics. The following year saw the introduction of their free legal advice system. The AA is still a flourishing and much valued national organisation for the support of motorists. 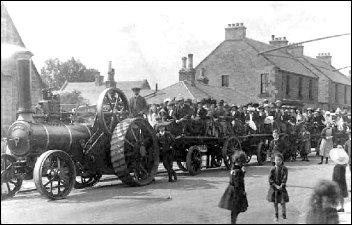 [Page 385 line 26] Road engines large steam engines for pulling heavy loads, like this one (right). They were also known as ‘traction engines’ (page 385 line 29 below). 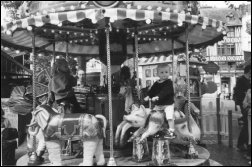 giddy-go-round (above) more usually now referred to as a ‘merry-go-round’. A fairground machine with wooden horses or other mounts for children, or others who are young in heart, to ride round as the music plays.

[Page 385 line 30] Village nurses in their uniforms The ‘Village Nurse’ was the equivalent of the modern-day ‘Community Nurse’, who would be a first port-of-call for sick children, nursing mothers, and ill people generally in the village.

Village Nurses needed only one year’s training in hospital work, three months in midwifery and three to six months in district work. They were trained under the auspices of the ‘Queen’s Institute’ originally set up through the fund raising organised among `the women of England’ for an offering to Queen Victoria on the occasion of her Golden Jubilee in 1887.

Village Nurses also figure in “An Habitation Enforced” (Actions and Reactions, page 20 line 3) and “A Doctor of Medicine” (Rewards and Fairies, page 255 line 22). 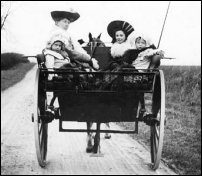 [Page 386 line 5] Territorials Parliament passed legislation in 1907 which saw the consolidation of the volunteer Yeomanry and Volunteers into the Territorial Force. The first units were created on 1st April 1908, and this date is accepted as the birth of what we know today as the Territorial Army, a volunteer force of civilians who train as soldiers in their spare time, and are available for service if the need arises [See Sellwood’s The Saturday Night Soldiers, Wolfe, 1966]

[Page 386 line 18] Joseph Finsbury A tiresome character in Robert Louis Stevenson’s story The Wrong Box. Kipling greatly admired the works of Stevenson (1850-1894) the author of such celebrated tales as Treasure Island, Kidnapped, and The Master of Ballantrae. He was particularly devoted to The Wrong Box (1889) by Stevenson and his step-son Lloyd Osbourne, a comic novel of a tontine, a group life-insurance policy in which all the benefits went to the last survivor; such schemes are now illegal. The hero of that tale, which was filmed in 1966, was Joseph Finsbury. [See page 100 of Something of Myself]

Like Mr Lingnam, Joseph Finsbury had a compulsive urge to lecture people he encountered, and bombard them with irrelevant facts. The Agent-General and the narrator were recalling Chapter III of The Wrong Box (“The Lecturer at Large”) in which, in an inn, “The Tregonwell Arms”, he addresses – uninvited – a group of working men on the differences in living standards in different parts of the world:

…the old gentleman, with less compassion than he would have had
for brute beasts, delivered himself of all his tedious calculations.
As he occasionally gave ten versions of a single income, placing
the imaginary person in London, Paris, Bagdad, Spitzbergen,
Bassorah, Heligoland, the Scilly Islands, Brighton, Cincinnati, and
Nijni-Novgorod, with an appropriate outfit for each locality, it is no
wonder that his hearers look back on that evening as the most tiresome
they ever spent.

[Page 387 line 10] shandrydan a kind of a portable chaise with a hood; in later use a jocular name for a rickety old-fashioned vehicle,

[Page 387 line 32] Foresters’ Fête The Foresters were a ‘Friendly’ or ‘Mutual Benefit’ Society: these were voluntary associations which provided insurance and other benefits to their members.

A fête is a festival or fair, usually held out of doors in the summer-time, a familiar community event in English villages.

[Page 388 line 8] Sumtner Barton Ales we have no clear indication as to whether Kipling had a particular village in mind. If we assume that ‘Sumtner Barton’ was in Kent or Sussex, there were many good local breweries in those counties. 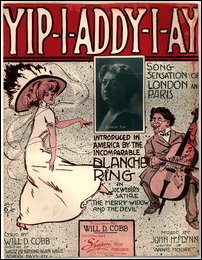 [Page 389 line 33 and Page 390 line 18] paper bonnet-boxes the delivery boy would have had a framework on the front of his handle-bars for holding his load. ‘Bonnet boxes’ were big boxes of cardboard or heavy paper for holding hats. The ORG Editors were sceptical about whether four full swarms of bees would have been too heavy a load.

We have consulted a bee-keeper, Michael Radcliffe, of Parwich in Derbyshire, who suggests that to hold a swarm, each box could have weighed more than 11 lb (5 kg), so four would have been a heavy load for a lad on a bicycle, though perhaps not wholly unmanageable:

‘The hatching weight of a worker bee is about 100 mg. It will then grow to full maturity and the bee will collect honey and pollen grains (food) for the hive. For a 10,000 bee swarm, this will be a minimum 1 kg of bees, but more likely 1.5 to 2 kg allowing for bees grown to maturity and containing honey in their crops and pollen attached to their abdomens. So depending on the size of the swarm, you can calculate the weight.

Hives normally swarm in May when the space becomes inadequate to contain the rapidly increasing population of bees. Winter population is estimated to be about 15,000; mid summer population around 60 to 70 thousand. Assuming population in May is around 50,000 and 2/3rds of the bees swarm, this represents 50,000 x 2/3 x 1.5Kg /10,000 = 5Kg or about 11 lbs imperial weight. My feeling is this could be on the lower end of the scale.’ [M.F.R.]

[Page 391 line 7] Sodom and Gomorrah ‘the cities of the plain’ destroyed by fire from Heaven for their evil doings. See Genesis XIII.

[Page 391 line 13] Circassian beauty The Circassians were a community who were expelled from the historical Circassia (known as Cherkessia in Russia) in the late 19th Century after a series of uprisings against Russian Imperial rule. They were to be found in various areas of the old Ottoman (Turkish) Empire. Circassian women were famous for their beauty and their talent as dancing girls.

[Page 394 line 7] a three-ring circus a lot of noisy or confused activity.

[Page 396 line 16] “It’s night or Blucher” A phrase attributed to the Duke of Wellington at the battle of Waterloo, meaning that the only thing that could save the battle for the Allies against Napoleon was nightfall, or the arrival of General Blucher and his Prussian army on the battlefield.

[Page 397 line 16] Deborah the bee (Hebrew); she does not like thunderstorms.

[Page 401 line 12] trituration this really means to reduce to fine particles or to powder— so it is used humorously.

[Page 401 line 31] cocoanut shies a fairground game, in which one throws wooden balls at cocoanuts, so as to win prizes.

[Page 402 line 22] mugwumping mugwump is a word of north American Indian origin (from the Algonquin people) referring to someone who is self-important, with a high opinion of himself. [Chambers Dictionary]

©The Kipling Society 2008 All rights reserved