Published in Echoes by Two Writers in Lahore in August 1884. A parody of William Cowper; listed in ORG as No 103.

Collected, with the sub-heading (Cowper) in:

This is a light-hearted little piece. The poet looks with the eye of an auctioneer or land-agent at beautiful fields of poppies in full bloom, considering the value of the land and wondering how it compares with the value of Heaven.

Kipling left United Services College in July 1882, and in October became Assistant Editor of the Civil and Military Gazette in Lahore. See our notes on “A Vision of India” for an account of his experiences and state of mind at that time. 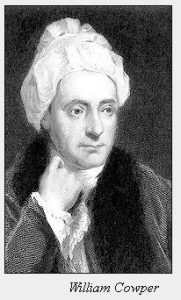 William Cowper – 1731-1800 – (pronounced Cooper) was a popular English poet, who changed the direction of 18th Century nature poetry by writing of the every-day life of the countryside. A fore-runner of the Romantic poets of the early 19th century, he was particularly admired by Wordsworth and Coleridge, who called him “the best modern poet”.

He wrote many poems (including “The Diverting History of John Gilpin”) and a good many hymns, coining a number of familiar phrases; ‘God moves in a mysterious way’. ‘ I am monarch of all I survey’, ‘God made the country, man made the town’, ‘Variety’s the very spice of life, That gives it all its flavour.’ Ann Weygandt (pp. 68-9) is critical of Kipling’s lack of understanding of Cowper, a classicist who had a true love of nature. She writes appreciatively of his skill in parodying an earlier 18th century poet, John Gay (1685-1732) – see our notes on “The Bees and the Flies”—but sees the “Appropriate Verses” as a caricature:

… even when allowance has been made for this, the second parody is immeasurably inferior to the first. The “Verses” were written when Kipling was younger, and possibly less tolerant of the eighteenth-century idiom; they attack, rather than suggest, Cowper’s style. They imply that Cowper thought of nature in terms of indoor objects, and even that his religion was smug—than which nothing, certainly, can be farther from the truth. He did attach pious little morals to accounts of everyday incidents—rather in the way of the elder Wordsworth—but his attitude toward Heaven and earth was not in the least proprietary. A hasty glance at the “Epitaph on a Hare” may have possessed Kipling with the idea that Cowper was capable of calling a lawn “a Turkey carpet,” but there are no easily discoverable instances of Cowper’s speaking of nature in terms of artificial objects.

(In fact the Turkey Carpet was a real one, since Cowper was writing of a pet hare; Ed.)

bombazine a fabric made from silk, wool or cotton, dyed black.

freehold the highest possible form of ownership of land in England, in legal terms a fee-simple absolute in possession.

auctioneer usually a house, land and estate agent who sells property and chattels to the highest bidder at public auction.