Verse following “The Mother Hive” collected in Actions and Reactions, in the Sussex Edition Volume 8, p. 103 and Volume 34, p. 59: in the Burwash Edition Volumes 8 and 27, and Collected Verse, Definitive Verse and The Works of Rudyard Kipling, The Wordsworth Poetry Library, 1994. 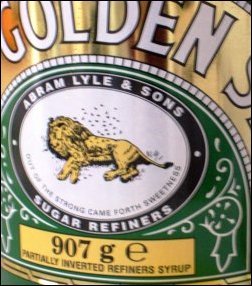 What ought to have happened is described at length in Chapter 14 of The Book of Judges in the Old Testament where Samson kills a lion whose body is occupied by a swarm of bees which produces honey.

The famous verse 14: Out of the eater came forth meat, and out of the strong came forth sweetness, with a picture of the lion, is still quoted on every tin of Lyle’s Golden Syrup. This version of the legend, however, goes horribly wrong !

It is a fable—it was first published as an epilogue to another fable, “The Mother Hive”
—-and most fitly employs the metre and tone of Gay’s “The Butterfly and the Snail” and “The Turkey and the Ant.” Nowhere has Kipling more completely caught the spirit of his model than here. The classical allusions; the words “egregious” and “disposed”; the compression in the phrase “Nor waited long” and the caesura that occurs after it; the proneness to generalization that would make an author say “profit” for “honey” when the more specific term would scan properly and even alliterate—all are typical of the Augustan age in general and Gay in particular. No analysis of the similarities between “The Bees and the Flies” and its prototypes can convey an adequate impression of Kipling’s skill; we must read it against its background to appreciate what he has done.

[Line 1] Augustan Age Latin literature written during the reign of the Emperor Augustus (27 B.C.-14A.D.) by great writers including Ovid, Virgil, Livy and Horace. The English ‘Augustan Age’ is explained in Notes to “The Propagation of Knowledge” (Debits and Credits, page 273, line 3 and The Complete Stalky & Co.)

[Line 2] Virgil Publius Virgilius Maro (B.C. 70-17), perhaps the greatest poet of ancient Rome, though Kipling would have made a strong case for Horace.

[Line 4] Proteus the herdsman of Neptune, god of the sea, who tended his flocks of seals.
Cyrene’s son Aristaeus – according to Greek legend, the son of Apollo and the nymph Cyrene, farmer and bee-keeper.

[Line 9] egregious rustic ‘notable’ or ‘outstanding’, but in a somewhat derogatory way, so, in this context, a stupid countryman.

[Line 25] sweet music it was believed that the noise made by beating on such utensils encouraged a swarm of bees to settle.