First published in the Pall Mall Magazine February 1894. Listed in ORG as No. 602.

A time-expired-soldier is on his way home in the floating community of a troopship, feeling very alone, poised between the world of soldiering and the uncertainties of civilian life, and of his family; four weeks between India and England, with little to do but reflect and ponder. The spelling of his philosophising indicates a not very articulate man of limited education, but he is shrewd, interested in life and interesting. Like Kipling he cannot resist the fascinating variety and complexity of the world around him.

Peter Keating, pp 75-6 notes that this is the last of Kipling’s second group of soldier poems:

Fot about three years after Barrack-Room Ballads (published in 1892) the soldier theme dropped out of Kipling’s poetry. Then while living in America, and engaged in writing of a very different kind, he produced a new series of barrack-room ballads which were published at irregular intervals in various periodicals and collected in The Seven Seas … The first poem of the group is “Back to the Army Again” in which a reservist, disillusioned with civilian life, pretends he hasn’t been in the army before, and re-enlists: by writing more barrack-room ballads, Kipling, like the reservist, is going “back to the army again”. The final poem, “For to Admire” completes a circle. The speaker, a time expired “soldier man”… has lost touch with everyone he once knew in England, and his civilian future in uncertain, but he finally finds consolation in thoughts of the wanderlust that army service has bred in him:

For to admire an’ for to see
For to be’old this world so wide,
It never done no good to me,
But I can’t drop it if I tried!

See also “The Ladies”, “Back to the Army Again”, and various other Barrack Room Ballads of the earlier and later groups.

bloomin’ euphemism for a swear-word 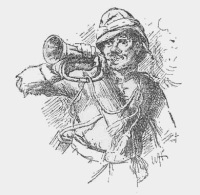 bugle a brass wind-instrument once used to give orders in battle but now used for ceremonies and routine calls in barracks or camp: there is a call for Reveille , for Colours and most poignant of all, the Last Post which is also played at funerals.

Lascar a seaman or stoker from India or North Africa.

Hum deckty hai! I am looking out! The look-out hails the bridge to show that he is awake.

quoits a popular shipboard game similar to hoop-la or Horseshoes for those who have nothing better to do. One throws a rope ring (a grommet) over a post.

women the private soldiers usually had women, Sergeants had wives,
and the officers had ‘lydies’ (ladies). See “The Burning of the Sarah Sands” (Land and Sea Tales) for life aboard a troopship in 1857.

the books the register of punishments awarded in the Orderly Room

clink without my boots The Clink was a mediaeval prison on Bankside in Southwark, London which was burnt down in 1780, and the name became slang for any prison. The prisoners boots were removed so he could not kick the staff or hang himself with the laces. His belt and braces may have been removed for the same reason.

beam in this context the line of sight is at right-angles to the fore-and-aft line of the ship but Kipling has mixed up his nautical jargon and should have said “on the bow.”

Aden In Kipling’s day an important naval base and coaling-station on the way to and from India at the Eastern approach to the Red Sea. Now in the Republic of Yemen.

Six years service like the ex-soldier in “Back to the Army Again” he might have been able to sign on for further service, otherwise he would be discharged to the Reserve.