This story was first published in The Delineator, Nov 1909, and Nash’s Magazine, May 1910. before being collected in Rewards and Fairies later that year.

With Mr Springett, the village builder, Dan meets Sir Harry Dawe, the great master mason of Tudor times, who he had first encountered the previous year (see “Hal o’ the Draft” in Puck of Pook’s Hill). He tells a story of his pride in his work, and the hatred between him and another craftsman, Benedetto, who was jealous of his skills.

In his pride, Hal has made a painting to decorate one of the King’s ships ‘all in a heat after supper’, but it is not a good piece of work; it is the ‘wrong thing’ of the title. One dark night Benedetto seizes him and threatens to cut his throat. But Hal tells how the King (Henry VII) had just knighted him, not for his craftsmanship and achievements, but because he had saved the King trouble over a small matter. The sword the King used to make him a knight was rusty; this too was ‘the wrong thing’. Hal’s pride had taken a fall. The two craftsmen laugh together at the irony of it, and the hatred between them is gone.

Sandra Kemp refers to this story in her Kipling’s Hidden Narratives, pp. 90 and 102:

…’All art is one, man, one !’ says Hal o’ the Draft…thus Mr Springett’s Village Hall … will be pukka, permanent, to endure when all memory of the builder has perished…

…if, as Hal discovers… art is not produced in an egotistical frenzy, ‘all in a heat after supper’, then the self-forgetting plural voices of the narrative are all the more necessary to it.. 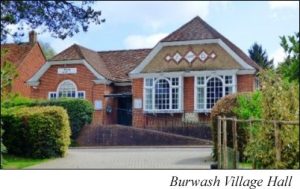 [Page 57 line 5] Mr Springett Alastair Wilson writes: the present Burwash Village Hall (formerly the Village Institute) was built in 1907, under the supervision of a London architect. The builder was the local builder, Stephen Lusted, who unquestionably was the model for Mr Springett. The Institute was indeed, his ‘last job on top of this mortal earth’ (lines 8/9).

Carrie Kipling’s diaries (29 August 2007) record that Kipling spent an hour with Stephen Lusted on the day before he died (30 August). Kipling performed the opening ceremony for the Hall on 4 December 1907, paying tribute to Lusted with these words:

They could perfectly realise the village pride that rejoiced because it had added something of good comfort and distinction to the place. In this village pride our forefathers were reared. It is largely to the working of that sane and honest pride that their descendants, the world over, learnt to build cities and found nations. It was true they might have found some difficulty in finding an equivalent for such words as “billiard table.” It is specially good to think that they have not departed from this last tradition, and that the work of the Institute has been done by the men in the village. We can comprehend how the builder, Stephen Lusted, would have liked to see the completion of his work—it was the crown of his life and his labours, the corner-stone of the whole: his memory will not soon be forgotten.

There is no record that John Kipling (Dan in the story), ever went to work up in Mr. Lusted’s attic, nor that he made a model yacht there, but it is not impossible. So the frame for this tale may have had some foundation in fact. [A.W.]

[Page 61, line 7] Magdalen Tower Magdalen College Oxford, was founded in 1458 and building completed about 1510. The reference may be to its high bell tower (commenced in 1492), or to the Founder’s Tower which was the original entrance to the college.

[Page 61, line 13] keckle this word seems to have been coined by Kipling to mean ‘slip’ or ‘spring loose’.

[Page 64, line 5] Jonah and the pompion that withered ‘pompion’ was an old word for ‘pumpkin’; in the King James’ version of the Old Testament, published a hundred years after Hal’s day, the plant was a ‘gourd’:

And the Lord God prepared a gourd and made it to come up over Jonah, that it might be a shadow over his head, to deliver him from his grief. So Jonah was exceeding glad of the gourd.

But God prepared a worm when the morning rose the next day, and it smote the gourd that it withered.

And it came to pass, when the sun did arise, that God prepared a vehement east wind; and the sun beat upon the head of Jonah, that he fainted, and wished himself to die, and said, It is better for me to die than to live.

Then said the Lord, Thou hast had pity on the gourd, for the which thou hast not laboured, neither madest it grow; which came up in a night, and perished in a night.

And should not I spare Nineveh, that great city, wherein are more than sixscore thousand persons that cannot discern between their right hand and their left hand; and also much cattle.

[Page 64, line 19] went no deeper than the plaster Kipling records that his father
liked “Hal o’ the Draft” and its sequel; `which latter he embellished, notably in respect to an Italian fresco-worker, whose work never went ‘deeper than the plaster’. He said that “judicious leaving alone” did not apply between artists.’ (Something of Myself p. 188).

[Page 65, line 28] kings went to chapel much the joke is in Mr Springett’s unconscious assumption, in the context of a Tudor story, of the latter-day distinction between (Nonconformist) ‘Chapel’ and (Anglican) ‘Church’.

cock 22, ‘leading . . . often with the notion of assuming the chief place, swaggering’.

Robert Brigandyne was a real person. He was Clerk of the King’s Ships under Henry VII (1485-1509) and continued to hold the post into the reign of Henry VIII.

From Great Harry’s Navy by Geoffrey Moorhouse (Phoenix paperback, 2005, page 11): ‘The work at Portsmouth was supervised by Robert Brigandine, ‘yeoman of the Crown’ and newly appointed Clerk of the King’s Ships.’

The ‘work’ in question was the building of the first dry dock. According to Moorhouse (page 12), the dock was designed specifically for the repair of two large ‘carracks’, one of which was the Sovereign (see the note below on p. 68 line 14).

The phrase in inverted commas, ‘yeoman of the Crown,’ is particularly interesting in view of Kipling’s words in the poem:

‘…With that he set the pott on his head and hied him up the hatch,
While all the shipwrights ran below to find what they might snatch;
All except Bob Brygandyne and he was a yeoman good.’

‘…Our King appointed Brigandyne to be Clerk of all his ships.’

In his notes on sources, Moorhouse cites Oppenheim, M, A History of the Administration of the Royal Navy and of Merchant Shipping in Relation to the Navy from MDIX to MDCILX (New York, 1961 edn) p. 36. [P.H.]

[Page 68, line 14] one of the King’s ships – the Sovereign was her name Henry VII, who took an interest in shipping and had the first dry-dock built in England, hired out his warships for trading when they were not required for the royal service. The Sovereign (completed in 1490), one of the most massive ships built in England to this date, is recorded as having made a trading voyage to the Levant.

[Page 68, line 18] Catherine of Castile (1485-1536); normally known as Catherine of Aragon. After the death of her boy-husband Prince Arthur, Henry VII’s older son, in 1502, she remained in England and finally married Henry VIII in 1509. Henry VII, after the death of his own wife Elizabeth, pursued complicated diplomatic negotiations for a second, marriage; at one point his widowed daughter-in-law was considered as a potential bride.

[Page 68, line 25] Arion musician in Greek legend, saved from drowning by a dolphin which had been charmed by his music.

[Page 70, line 32] put-locks the short horizontal timbers of a scaffolding, on which the scaffold boards rest.