There is a version of this poem in Kipling’s own handwriting dated Christmas 1886, in the Kipling Papers in the Special Collections at the University of Sussex. It was not published by Kipling, but is to be found in Rutherford (p. 351) and Pinney (p. 1837).

This is a fan, says the poet, for his mother. It is not for a worldly woman in Versailles to flirt behind, like Madame Pompadour, the beautiful mistress of Louis XIV of France, but for a chaperone in Simla, guarding her wilful daughter from the dangers of the ball, and its aftermath. Guard her well, he suggests, ‘Use it for a scourge’.

This was a message that might not have been entirely welcome to Alice Kipling, a high spirited and attractive woman, who was not averse to a little mild flirtation herself, at the age of forty-nine. See “My Rival” (1885). 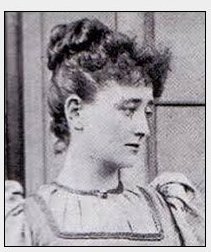 Trix was now 18, beautiful and vivacious, and as Andrew Lycett recounts (p.132) she had attracted the attentions of the Viceroy’s son:

Lord Clandeboye, Dufferin’s feckless heir, conceived such a passion for Trix that, on several occasions, he asked her to marry him. Despite the attractions of becoming a peer’s daughter-in-law, Trix held back: “I’ve always liked Irishmen, but I drew the line against marrying them somehow”, she later said. The upshot—according to the Kiplings’ side of the story, at least—was that Dufferin became embarrassed at the attention his son was paying the daughter of an art teacher and asked Alice to take Trix to another hill station. Mrs. Kipling drew herself up to her fullest height and replied that perhaps it was Clandeboye who should move.

Rudyard, who was devoted to his sister, tended to be hostile to all young men who wooed her. In December 1886 she was, after all, still only eighteen. He later brutally warned off his friend and Editor, Kay Robinson, from paying court to her.

Trix herself, incidentally, had a treasured paper fan which she used as an autograph album between 1891 and 1895, with over ninety signatures of friends and relations. (See Trix, Kipling’s Forgotten Sister, published by Pond View, Peterborough, in 2003, p. 118).

Henry Austin Dobson (1840-1921), wrote the verses “On a Fan that Belonged to the Marquise de Pompadour”: