ORG Volume 5, page 2469 (Uncollected number 199) records first publication in the Fortnightly Review of May 1890, in the Sussex Edition, Volume 29, page 343, the Burwash Edition, Volume 233 and KJ 137/8 with some editorial comment. The piece was included in The One Volume Kipling, New York, 1928, and published as a separate book of forty pages by the Windsor Press, San Francisco in 1929 , an edition of 100 copies.

This story was published during Kipling’s first year back in England, when he was finding his feet as a writer in London, aged twenty-five. This Editor finds it a somewhat tedious dialogue between two rather unpleasant people, guests at a house-party in the south of England, probably Sussex, where the Downs meet the sea. They are not particularly well-acquainted and gossip spitefully about their fellow-guests and their own lost loves, almost coming to an understanding themselves.

Weekend house-parties in the country were an established part of English upper-class life in the 1890s and into the twentieth century, but the exchanges of this couple fail to engage the reader, despite the counter-point with Rossetti’s angst-ridden lines. They lack the context-setting Anglo-Indian background of Plain Tales from the Hills, and the wit of Oscar Wilde or Saki, or of later writers of country-house social comedy like P G Wodehouse. The tale has been largely ignored by Kipling’s critics, although J M S Tompkins (p. 20) refers to it as a ‘wrong turning’ along with The Light that Failed, written at about the same time.

See the headnote to “The Hill of Illusion”. (Wee Willie Winkie) for a similar story in dialogue, and references to others. See also “The Edge of the Evening” (A Diversity of Creatures, page 278.)

[Title] An ironic echo of the title of the play within a play in Act One, scene 2, “A Midsummer Night’s Dream” by Shakespeare: ‘The most Lamentable Comedy, and most Cruel Death of Pyramus and Thisby’.

[Heading] These lines are by Dante Gabriel Rossetti. The weeping willow has been a symbol of mourning since Biblical times (Brewer’s Dictionary of Phrase and Fable).

Roan bay or dark-coloured, with touches of other colours.

Bay brown head and body – perhaps a touch of black here and there. 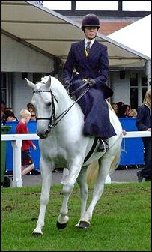 habit in this context a costume for riding side-saddle. (right)

martingale a strap passing between a horse’s forelegs to keep his head down. Kipling is demonstrating the knowledge of horses and harness that he had acquired in India. All these terms would have been readily comprehensible to a generation brought up before the motor-car.

smoking-room a comfortably furnished room with a bar, once provided in ships, hotels and large county-houses, where gentlemen could relax with a drink and a smoke; a great place for gossip – featured in many of the stories. In Kipling’s day ladies were not usually admitted to smoking-rooms.

a yorking hog of a hack a clumsy and badly-trained horse.

mouth of a turnstile A horse is controlled by the metal ‘bit’ in its mouth. A horse that is ‘hard-mouthed’ is insensitive to pressure on the bit and thus hard to control.

turnstile a metal gate that admits people one by one.

Hands of a butcher He is a heavy-handed and clumsy rider.

I am the rule an echo of a somewhat ambiguous proverb, ‘The exception proves the rule’ which has been defined as ‘The exception gives authority to the rule.’ She is saying that she sets the rules.

slumgullion a curious word of American origin with many meanings; the Oxford English Dictionary and the Smaller Slang Dictionary by Eric Partridge define it as a thin watery stew, or any unpleasant weak beverage . Its use in this context is not clear. ORG surmises that it must mean good works among the poor.

Drop your hands to lower the horse’s head and slow him down.

There goes my hair she has her hair in a bun or chignon which has come adrift.

cherubs legendary figures of children with wings, junior angels, one might say. The plural in Hebrew is cherubim.

Tables of Stone unbreakable rules, the Ten Commandments brought down by Moses from tne mountain were carved on two such tablets; see Exodus 24,12.

through the same fire an echo of Psalm 66,12: ‘we went through fire and water’. See also the story “Through the Fire” in Life’s Handicap.

hocks the equine equivalent of the a person’s ankle. The horse has been carelessly treated.

cantle the rear portion of the saddle.

rowel in this context a small spiked wheel on a spur.

at this rate they are galloping, probably on a hard road which is bad for the horses’ hooves

The sun went down an hour ago see the Heading to Chapter 13 page 206 of The Light that Failed, slightly amended.