[Line 1] Bow Bazar The Glossary to Departmental Ditties and Other Verses (1891-1899) explains that this is “one of the principal bazars in Calcutta”.

[Line 2] “Barrishter-at-Lar” Heavily accented rendering of “barrister-at-law”, by a Bengali for whom English is not his first language. A barrister is a lawyer who pleads in court.

[Line 10] the tubes of Lancaster, Ballard, Dean, and Bland Makes of gun; the firm of Charles Lancaster Ltd was a long-established firm of English gunsmiths.

Dean this is probably a reference to the Dean and Adams pistol, which, in various forms, remained the standard British army pistol until 1880. [A.W.]

Bland Thomas Bland and Sons was a firm of gun-makers from Birmingham (UK) – they now trade in the USA. [A.W.]

[Line 11] bowie-knife a particular type of fighting knife, popularies by Colonel ‘Jim’ Bowie in America in the 1820s, and still made today. [A.W.]

[Line 20] Snider Jacob Snider was an American engineer who invented a means of converting rifled muzzle-loading small-arms to breech-loaders. The Snider-Enfield rifle – usually shortened to ‘Snider’ – was the standard British Army weapon from 1864 to 1871. (See Stalky & Co. “The Flag of their Country”, p. 195, where Foxy, the school sergeant says: “Nor it won’t do even a condemned Snider to be continual snappin’ the lock …”) [A.W.]

[Line 28] Grand Trunk Road The great highway, whose route is centuries old, across the Gangetic plain of central India. Before the full expansion of the Indian railway system, it was The Highway, linking the most important parts of India. Today, its route runs from Chittagong, in Bangladesh, through Calcutta to Delhi and Amritsar, thence into Pakistan and Lahore, Rawalpindi and Landi Kotal. It crosses into Afghanistan and ends at Kabul. [A.W.]

[Line 29] flail A manual threshing device consisting of a long wooden handle with a shorter, free-swinging stick attached to its end, used to beat out the ripe grains of cereal crops. The ‘hide-bound flail’ shows that Nubbee Baksh Punjabi Jat is a farmer, whose flail can also be used as a dangerous weapon.

[Line 30] Tonk jezail There are two Tonks in Kipling’s India. One is in Rajasthan, some 190 miles south-south-west of New Delhi, but its history and general ambiance don’t suggest the arms trade, or gun-making. The other Tonk (sometimes spelt ‘Tank’) lies in today’s Pakistan, and is near Dera Ismail Khan, which itself lies on the Indus River. It is close to the Tribal Lands, and very much within Kipling’s area, much closer to Lahore than the Tonk in Rajasthan. [A.W.]

The ‘Glossary for English Readers’ appended to the 6th edition of Departmental Ditties specifically states : ‘Tonk, a state and city in Rajputana.’ This must have been written by Thacker, Spink & Co., since the descriptions of places such as Tonk are taken directly from the index which accompanied their Reduced Survey Map of India. Kipling presumably approved it, so I think that we can take it that this is the Tonk he meant.

In line with the other militant folk that Kipling mentions, who are all armed with weapons specific to their region or country, Chimbu Singh, the Rajput from Bikaneer, has a Rajput weapon, the jezail, or locally made musket, from Tonk. Tonk was then a small native state on the eastern edge of Rajputana, sandwiched between Bhopal to the south and Gwalior to the north. It was not an area that one would have immediately associated with a local arms industry and it may be that Kipling chose it more for the fact that Tonk fitted the line of verse than for factual accuracy” [R.C.A.]

The Yusufzais were Pathans and one of the main Eastern Afghan tribes, living just north and east of the Khyber Pass, and Kipling used the adjective ‘Khyberee’ to describe a tribesman living in the area of the Pass.

However, the Departmental Ditties glossary gives an alternative spelling (Khaibari) and identifies this as an Afghan tribe living in the neighbourhood of the Khyber Pass. In my extensive reading on the place and the period I had never come across such a tribe and it does not appear in Sir Olaf Caroe’s definitive work Pathan, (Macmillan, London, 1958 & Revised Edition Oxford University Pess, Karachi, 1973).

However, I did find a reference to it in Across the Border – Pathan and Biloch, by E.E. Oliver, (Chapman and Hall, London, 1890), where the writer pours scorn on the ideas of some English politicians who thought that all one had to do was to reach agreement with the ‘Khaibaris’ to settle the problems in the area, unaware that the country was inhabited by a considerable number of tribes, between whom was a great deal of mutual distrust, conflict of interests, downright hostility and blood feuds. So it would seem that ‘Khybaree’ was more than just a description of tribesmen who lived in the area, it had become a political buzz-word in England amongst those without real knowledge of the situation. I’ll bet Kipling was smiling with his tongue in his cheek when he put that word in. [RCA]

[Line 33] quoit The ancient weapon of the Sikhs. It is circular, and sharp on the outside edge, and when thrown will cut through a plantain stalk at a distance of 80 yards. [Ralph Durand p. 7].

In Kim p. 86, Kipling writes of the passing river of life on the Grand Trunk Road:

Then an Akali, a wild-eyed, wild-haired Sikh devotee in the blue-checked clothes of his faith, with polished-steel quoits glistening on the cone of his tall blue turban, stalked past, returning from a visit to one of the independent Sikh States, where he had been singing the ancient glories of the Khalsa to College-trained princelings in top-boots and white-cord breeches.

[Line 36] dah-blade A dah is a Burmese dagger or short sword, with a twelve-inch blade, widening toward the tip, and carried by Dacoits.

[Line 42] Pubbi A village near Peshawur on the North-West Frontier.

[Line 46] Siva’s sacred bull “Hindoos regard the bull as sacred because Siva, the third god of the Hindoo Trinity, rode on one. The streets of every Indian town are infested with sacred bulls, who feed at will on the grain, etc., exposed for sale on the bazaars” [Ralph Durand p. 7].

In the first chapter of Kim (p. 19) the boy earns a meal from a vegetable seller by driving away a grazing bull:

Up flew Kim’s hard little heel and caught him on his moist blue nose. He snorted indignantly and walked away … 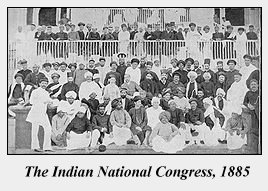 [Line 48] The Indian Congress men The Congress was a political league founded in 1884-5 by A. O. Hume to give Indians an opportunity of expressing their political views. It had no official status at that time. Bengalis were active in the Congress movement. Kipling and his father, like most Anglo-Indians, were sceptical about how far it represented the aspirations of the peoples of India.

However. under the leadership of Jawaharlal Nehru Congress was the political party that led India to independence in 1948, and governed the new state for many years thereafter.
David Gilmour (p. 64) describes the Indian National Congress in those early days:

At first a small, urban-based organization dominated by Hindu lawyers, Congress began its existence in the 1880s, proclaiming an ‘unswerving loyalty’ to the British Crown and declaring that the continued affiliation of India to Great Britain was ‘absolutely essential’ to the interests of national development. In the early years it pressed for the admission of more Indians to the ICS and for greater Indian representation on the legislative councils … But the initial British view that Congress was a loyal and harmless body slowly altered as its demands for representative institutions became stronger, and as officials gradually suspected it of becoming detrimental to Muslim interests … When he [Kipling] was in India he insisted that the organization did not represent anybody except a small group of university-trained hybrids …