Published in the United Services College Chronicle no. 7, 5 December 1881.
Not to be confused with a very different poem, with the same title, in Notebook 3 and Sundry Phansies, dated August 1881.

A boy waits outside the College at nightfall for a junior boy he has sent to get him food for his tea.
The spelling, for instance “waytinge” and wearilie” and the extra “e” on many words, is intended to give an archaic effect. Kipling was spending a good deal of time reading and writing in the Head’s library, and – as often – was seeking to echo the language and forms of earlier poets. 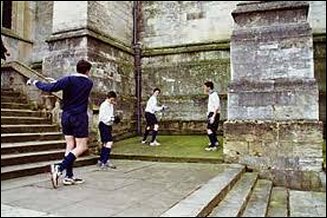 Fives a game where a ball is struck with one’s hand, not a racket. Popular in some of the older English Public Schools but almost unknown anywhere else.

The Fives Court at USC marked the end of the College property. In “The Last Term” Stalky, M’Turk and Beetle are late getting back to school:

“It’s no good,” puffed M’Turk. “Bet Foxy [the school Sergeant] is waiting for defaulters under the lamp by the Fives Court.”

the Locke-uppe Bell a bell rung in the evening like a curfew, to warn that all the boys must be back in the College.

bringe me a Caine ‘Bring me a cane !’ When Robinson, the junior boy, returns, he will be beaten for taking so long. Kipling was fifteen when he wrote this poem, and – though the junior may well have been only twelve – would not, in fact, have had the authority to beat as a punishment. This would have been reserved for older boys, of seventeen or eighteen, appointed as ‘prefects’ , with disciplinary powers. So the poet was not speaking for himself, and may have been satirising an overbearing senior, who would have been quickly recognised by his readers in the school.