After an account of the Victoria Cross, the highest British decoration for bravery in battle, Kipling describes the exploits of a number of winners of the Cross, from the Sepoy Rebellion of 1857 to the Great War of 1914-1918.

There is a Preface in verse beginning : ‘To all to whom this little book may come’ – reprinted from the Boy’s Own Paper of February 1936, where it was titled “Be Fit.” and collected, with slight variation, in Inclusive Verse (“A Preface”) Definitive Verse and The Works of Rudyard Kipling in The Wordsworth Poetry Library. (See ORG Verse, p. 5463)

This story has been somewhat neglected by the commentators. For background it may be useful to see the following:

[Page 3 line 5] Cunard the famous shipping company founded in 1839 and amalgamated with the White Star Line in 1934. 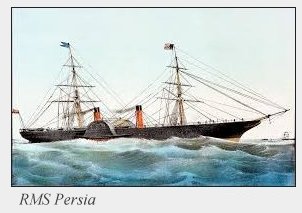 [Page 3 line 6] Persia a good-looking iron vessel built and engined at Glasgow in 1854.

[Page 4 line 2] four hundred and eleven men … Up to January 2007 there had been a total of 1352 Crosses awarded, plus three bars to existing holders (in effect further crosses). One Cross was also awarded to the American Unknown Soldier.

[Page 4 line 4] the Great War in this context, the war between Great Britain and allies against Germany and allies from 1914-1918.

[Page 4 lines 7-8] bravery in the early morning … etc. an echo of Napoleon’s observation: As to moral courage, I have very rarely met with the two o’clock in the morning courage…

[Page 4 line 21] stockade a fort made of large timbers driven into the ground – used in Indian and other jungles, New Zealand etc.

[Page 5 line 22] Crimea a peninsula in the Black Sea, scene of much fighting in the Crimean War – see the Note to page 3 line 4 above.

[Page 5 line 23] Indian Mutiny the Sepoy Rebellion of the Bengal Army in 1857-1858, mentioned in much of Kipling’s prose and verse.

[Page 7 line 9] a private “of persuasive powers ….” J Hollowell, (also known as Holliwell) 78th Foot (2nd. Battalion The Seaforth Highlanders, ‘The Ross-shire Buffs’.) At the relief of Lucknow, he was, with others, left to tend wounded with Surgeon Home – also the holder of a Cross; they took refuge in a house which was set on fire, but were eventually relieved. (Arthur, p.72)

[Page 7 lines 17 – 22] a little man in the Sutherland Highlanders… William M’Bean (McBean). When congratulated on his achievement he observed ‘It did not tak’ me twenty minutes !’ He eventually held every rank from Private to Major-General. (Arthur, p.85)

[Page 7 line 22] two troopers who rode to the rescue of their Colonel There are two possible pairs of candidates for this. Thomas Hancock & John Purcell – both Privates in the 9th Lancers, who with Rooper Khan, saved the life of their commanding officer, Sir Hope Grant when his horse was shot at the siege of Delhi (Arthur, p.52);
but also Charles Anderson & Thomas Monaghan. Of the two pairs, the citations of the latter provide a much closer match to Kipling’s description.

[Page 7 line 28] Then there was a negro captain of the foretop Kipling got this paragraph a bit wrong. William Hall the first black person to receive the VC, was actually a Canadian. Hodge & Gordon were not with him; indeed, William Gordon wasn’t born until 1864, some years after the Sepoy Rebellion. Hodge won his VC, the second black person to get one, in Gambia in 1866; Gordon also won his VC in Gambia, but much later, in 1892.

[Page 8 line 12] Three Bengal Civilian Government officers one of which was Kavanah below.

[Page 8 line 16] “Lucknow” Kavanah disguised himself as a mutineer and, with help of a loyal Brahman found the relief column led by Sir Colin Campbell and guided it to Lucknow. (Glanfield pp. 48-49).

[Page 8 line 17] Ross Mangle’s heroism Ross Lewis Mangle, an assistant magistrate at Patna, joined a column going to relieve Arrah which was ambushed on the way; he carried a wounded soldier for six miles to a boat although wounded himself.

[Page 8 line 23] McDonell’s cool-headedness William McDonnell, Bengal Civil Service, acted as a guide, and rallied troops when they reached the boats which he also released under fire. (Glanfield, p. 47-48)

[Page 9 line 3] a chaplain The Rev. J W Adams rescued several Lancers in danger of drowning in a flooded ditch while under fire in the Second Afghan War, 1878-1880. (Glanfield, p. 66.) Under the Geneva Convention of 1864, (and later revisions) Chaplains and Doctors are supposed to be unarmed and do not take part in fighting but must be able to protect themselves when opposed to troops of nations who have not signed the Protocol, and, in fact, may not have heard of it. See page 11 line 3 onwards below.

[Page 9 line 14] hurrying to attend to them It was the practice of the Afghans, the women in particular, to mutilate any enemy dead and wounded left on the battlefield, see the final verse of “The Young British Soldier”.

[Page 9 line 26] But it is difficult to get details And there isn’t enough detail given to be certain. Presuming that we are still speaking of the Second Afghan War, there are three reasonable possibilities, of whom the most likely probability is
Edward Leach, rather than Euston Sartorius (wonderful name!) or William Vousden.

[Page 10 line 8] Another man I questioned was a doctor. And another man that it is impossible to firmly identify. There are some clues in the succeeding text. One is the emphasis of ‘but fired at a doctor on his face value as a white man’, which leads one to discount any VC’s won during either of the Boer Wars, when white was fighting white. Another is the generally chronological ordering of the actions in the article. Then there is the mention of ‘bush fighting with puffs of smoke popping in and out among the high grass and never a man visible’, which rules out a few possible candidates.
The best we can offer for this one is Surgeon-Major Owen Lloyd the case for whom is strengthened by ‘he may find himself senior officer in charge of what is left of the command, if the others have been shot down’, as Lloyd found himself in just that position when the commanding officer of the post, the man he had tried to rescue, died of his wounds (the mention of “tying up an artery” and “tightening the tourniquet” does also suggest a rather serious wound). Two out of the three recipients of Bars to their Crosses are doctors.

[Page 12 line 13] Another V.C. of my acquaintance ORG believes this to be Lord William de la Poer Beresford, Captain, 9th Lancers, as recorded by Arthur (p. 128). Beresford went to the assistance of Sergeant Fitzmaurice whose horse had been speared by a Zulu, saying ‘If you don’t get up I’ll punch your head for you!’ They were joined by Sergeant O’Toole, who fired at the enemy, held the wounded Fitzmaurice upright in the saddle and received a Cross himself after Beresford told Queen Victoria that he could not accept a Cross unless O’Toole received one as well.

There are a number of instances of mounted officer rescuing, or attempting to rescue, dismounted soldier during the Zulu War, which is presumably the conflict in question, and winning the VC. Most involve a dismounted officer, in one case a Sergeant, and therefore do not fit Kipling’s ‘Trooper’. Allowing for whether (as indicated in ORG) that Beresford and Kipling actually were acquaintances, there is a decent case that it may have been the then Colonel Redvers Buller who, having already rescued two dismounted officers, went to the assistance of Trooper George Ashby. 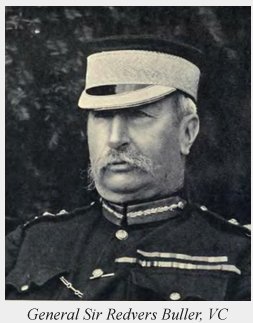 Buller’s citation mentioned all three rescues. One of the rescued officers, Cecil D’Arcy, was himself recommended for, but did not receive, a VC in the same action, but was later awarded one for trying, but seemingly failing, to rescue a stunned and dismounted Trooper, curiously, in the same action in which Beresford won his! The story as given by Kipling doesn’t precisely match the account given by Ashby to an Australian newspaper (no more do the details he gives if it is Beresford). But the action was in 1879.

Buller died aged 68 in 1908, and we don’t know when he might have spoken to Kipling if ever he did. Ashby’s account was given in 1917, and the article, originally published in 1897, was plainly updated long after its publication, so discrepancies in accounts are certainly possible! Buller went on to have a distinguished military career, rising to be a general, and commander of British forces in 1899 in the Second South African War.

[Page 14 line 21] ambulances at that time these would be covered litters.

[Page 15 line 8] fuzee or ‘fusee’, in this context a match with a large head that will stay alight in the wind.

[Page 15 line 27] transpontine across a bridge – on the South side of the River Thames in London, where the theatres were, so here meaning ‘theatrical’.

[Page 16 line14] One of the youngest of the VC’s of his time From the abundance of clues, this would seem to be John Manners Smith who won his VC at the end of 1891 at Nilt Fort, due West of Kanjut Sar, at the age of 27 serving with the 5th Gurkha Rifles. Interestingly, there is another VC winner from 13 years later, John Grant of the 8th Gurkha rifles, winner of the last VC to be awarded before WWI, whose citation reads not dissimilarly to Kipling’s account.

[Page 17 line 7] Kaarakoram Mountains a section of the Himalayas in Kashmir.

[Page 17 line 12] Kanjuts Kanjut is a mountain in Jammu and Kashmir.

[Page 17 line 26] Goorkhas now usually ‘Gurkhas’, hardy hillmen from Nepal who have provided excellent soldiers for the British Army since 1815.
Dogra Sikhs Sharad Keskar writes: There are Dogra only regiments in the Indian Army as distinct from the Sikh ones. The Dogras have a Rajput lineage. They are from an area which loosely covers North East Rajasthan, Southern Punjab, and impinges on the lower slopes of the Garwal Hills of the UP (Uttar Pradesh). But just as there are Jat Sikhs and Jat only regiments, there are Dogra Sikhs. Sikhs who are proud of their distinct origins do qualify by including their antecedents – i.e. Dogra Sikhs and Jat Sikhs. 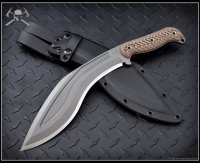 [Page 18 line 15] kukri the famous weapon of the Gurkhas and more like a short curved sword than a knife.

[Page 19 line 5] one volley in the early morning shot at dawn – the usual punishment for captured spies. For background see Playing the Great Game by Michael Edwardes (Hamish Hamilton 1975) and Kim.

[Page 19 line 9] No Man’s Land in this context the land between opposing armies.