These verses were written in honour of survivors of the ‘Indian Mutiny’ who dined at the Royal Albert Hall in London on 23rd December 1907, the fiftieth anniversary of the outbreak, as guests of the Proprietors of the Daily Telegraph.

The Times the next day reported:

There were some 200,000 Indian soldiers in the armies of the East India Company, and some 40,000 British troops in India. In May 1857 Indian soldiers at Meerut refused orders and fired on their officers. The rising quickly spread, and the mutineers marched to Delhi and took the city, proclaiming the old Mughal Emperor as their sovereign. The rising soon erupted into violence and rebellion across the Ganges plain of Central India.

The reasons for the mutiny were complex, including discontent over pay and promotion, generalised resentment at British authority, and—more immediately—the fear that Hindu and Muslim religious observances were under threat because of the animal fat used to grease new ammunition. Some of the Indian Princes joined the uprising, but others remained loyal, as indeed did many Indian soldiers. The conflict was largely confined to Central and Northern India. 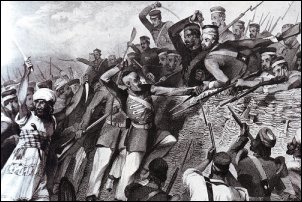 After a slow initial reaction the British gathered their forces and ruthlesssly put down the rising.

There was bravery and brutality on both sides, British women and children were slaughtered at Cawnpore and elsewhere, some rebellious sepoys were hanged or blown from guns, and there was a heavy death toll. Peace came in July 1858, and thereafter the British took over the governance of India from the East India Company, and the army and administration were reorganised.

Kipling and the ‘Mutiny’

Kipling was born in Bombay on 29 December 1865, only seven years after the suppression of the rising, which is mentioned in a number of his tales. In their early wanderings Kim and the Lama encounter a grey-bearded old soldier:

“… I do not speak without knowledge who have seen the land from Delhi south awash with blood.”

“What madness was that, then?”

“The Gods, who sent it for a plague, alone know. A madness ate into all the Army, and they turned against their officers. That was the first evil, but not past remedy if they had then held their hands. But they chose to kill the Sahibs’ wives and children. Then came the Sahibs from over the sea and called them to most strict account.” …

“So they turned against women and children? That was a bad deed, for which the punishment cannot be avoided.”

“Many strove to do so, but with very small profit. I was then in a regiment of cavalry. It broke. Of six hundred and eighty sabres stood fast to their salt— how many think you? Three. Of whom I was one… I rode seventy miles with an English mem-sahib and her babe on my saddle-bow. (Wow! That was a horse fit for a man!) I placed them in safety, and back came I to my officer— the one that was not killed of our five. ”

In “The Undertakers” in The Second Jungle Book, the Mugger, the giant man-eating crocodile, tells of those times:

‘…the season I think of, the river was low, smooth, and even, and, as the Gavial had warned me, the dead English came down, touching each other. I got my girth in that season—my girth and my depth. From Agra, by Etawah and the broad waters by Allahabad——’

And in “The Lost Legion”, in Many Inventions, he wrote of how Afghan tribesmen turned on a rebel regiment which had fled into the hills near the Border:

Sometimes a graybeard speaks of his share in the massacre. ‘They came,’ he will say, ‘across the border, very proud, calling upon us to rise and kill the English, and go down to the sack of Delhi. But we who had just been conquered by the same English knew that they were over bold, and that the Government could account easily for those down-country dogs. This Hindustani regiment, therefore, we treated with fair words, and kept standing in one place till the redcoats came after them very hot and angry. Then this regiment ran forward a little more into our hills to avoid the wrath of the English, and we lay upon their flanks watching from the sides of the hills till we were well assured that their path was lost behind them. Then we came down, for we desired their clothes, and their bridles, and their rifles, and their boots—more especially their boots. That was a great killing—done slowly.’

There is an interesting commentary on the poem on The Elite Skills Classics website over the signature of ‘L.W.’:

Kipling implies that there is not only a gap in time but in human quality between the ‘heroes’ of the past and we, who can merely contemplate their deeds with astonishment, incapable of matching them. It should be remembered that he was addressing real men and women (the latter members of the besieged Lucknow garrison) who had actually been the ‘desperate host’. Most of these were at least 70 years old, though a couple had actually been born at Lucknow during the Siege, so that a degree of nostalgia is understandable, and perhaps permissible. They would never gather together again.

Fashionable modern taste may reject the ‘imperialistic’ – ‘cleansed our East with steel’- and racial -‘Keepers of the house of Old’ – implications of the poem. Certainly the enlightened guardians of ‘politically correct’ orthodoxy will NOT allow us to shed an unscorned tear for those who performed their duty as they saw it.

However, we all at some moment must evoke, as Kipling does here, the ‘secret power’ of all the hosts who have gone before us, in order to face our own ‘Day’, without shaming ourselves or them

See also KJ 330/08 for an important article on Roberts..
Some further reading

the astonished years an interesting turn of phrase. ‘The astonishing years’ would not scan, so this is the alternative – perhaps implying that it is not so much the years that are astonished, but the men and women who survived them.

Hail and farewell the English translation of the Latin Ave atque vale and an echo of the salute to Caesar by gladiators about to die—Ave Caesar, morituri te salutant (Also quoted by Suetonius who flourished around 120 A.D.)
When the sixteen-year old Kipling wrote a poem on the occasion of an attempt to assassinate Queen Victoria in 1882, he called it “Ave Imperatrix ” (Hail, Empress !) The ‘Sepoy hordes’ in the fourth verse:

Keepers of the House of old An echo of Ecclesiastes 12,3:

‘In the day when the keepers of the house shall tremble, and the strong men shall bow themselves, and the grinders cease because they are few, and those that look out of the windows be darkened,

That when Fate lays on us our task See above.