[Page 176, line 11] Mr. Harmsworth Alfred Harmsworth (1865-1922), afterwards first Viscount Northcliffe, journalist, publisher, and newspaper proprietor, notorious for yellow journalism; founded the Daily Mail, 1896, and the Daily Mirror, 1903; chief proprietor of The Times, 1908; one of the great promoters of his age. Kipling’s connection with him came through the “Absent-minded Beggar” business: see the note on Chapter VI above. Harmsworth’s visit by motor car was in October 1899 (Carrington, p. 367).

[Page 177, line 24] ‘Steam Tactics’ The tale “Steam Tactics” was published in December 1902, and collected in Traffics and Discoveries (1904); Kipling bought his “Locomobile”, an American steam-driven car, in 1901. All of his cars had names: this one’s was “Coughing Jane.”

[Page 178, line 13] and so spouted home See Meryl Macdonald, “Lordly of Leather, III,” Kipling Journal, March 1983, p. 36, where a story something like this about Kipling’s Lanchester is told on the authority of Archie Millership, once a sales director for Lanchester. 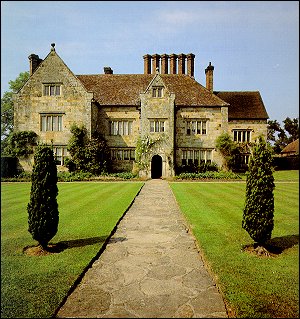 Bateman’s, Burwash, Sussex, was bought by Kipling for £9,300 on June 10, 1902; he spent the rest of his life there. The house is now a memorial to Kipling, the property of the National Trust.

[Page 179, line 10] Jane Cakebread Lanchester The name that Kipling sometimes gave to “Amelia,” after a notorious prostitute who was constantly appearing in court. This dialogue perhaps belongs to June 11 1902, only six days after Kipling’s Lanchester had been delivered, when he went over to Bateman’s (Caroline Kipling’s diary).

[Page 179, line 17] my chauffeur Kipling himself never drove, but depended on a chauffeur from the beginning.

[Page 180, line 5] mill-sluit A word Kipling picked up from South African Dutch: a form of sluice.

[Page 180, line 12] Fellahin Battalions Egyptian peasants, such as Willcocks would have had at Assouan.

[Page 183, line 8] Cocculus Indicus The dried fruit of an Indian shrub, containing picrotoxin. In large doses it is poisonous; it was sometimes used by pub keepers to increase the effects of their beer.

[Page 184, line 21] Trugs A trug is a shallow wooden basket, whose manufacture is one of the specialities of Sussex.

[Page 186, line 20] adventuring on the brook The Midsummer Night’s Dream production, with a donkey’s-head mask fetched from London, was held in October 1904; the birchbark canoe arrived from Canada on June 30, 1907 (Caroline Kipling’s diary).

[Page 187, line 3] I went off at score The earliest known reference to Kipling’s work on the Puck of Pook’s Hill stories is September 25, 1904, about two years after they had moved into Bateman’s: “Rud at work on a fresh idea, a set of stories, the History of England told by Puck to children” (Caroline Kipling’s diary). His preparation for the Roman stories, though, goes back at least as far as 1897.

[Page 190, line 22] niello and grisaille Niello is a method of decorating engraved silver or gold objects by filling in the lines with a special metal paste. Grisaille is painting executed wholly in shades of gray (to imitate relief sculpture).

[Page 191, line 1] cryptogram . . . forgotten What Kipling means has not yet been discovered.

[Page 192, line 11] Chief Morticians to that trade I do not know what the fancied link between the ‘Puck’ stories and the “Higher Cannibalism” can be. The words following the phrase “awful charge” in this sentence were supplied by Mrs. Kipling in editing the MS. The change may have had something to do with a reference, also deleted, to Marie Stopes, the advocate of birth control, in the preceding paragraph (Caroline Kipling to H.A.Gwynne, 15 October 1936: MS. Dalhousie University).

[Page 193, line 19] Colonel Wemyss Feilden Henry Wemyss Feilden (1838-1921) lived in the house called “Rampyndene” on Burwash High Street. He had served in the Indian Mutiny and in China before selling out. From 1862 to 1865 he served in the Confederate Army in the American Civil War. In 1875-76 he was naturalist on the British Arctic Expedition (see p. 5); he served in the first Boer War of 1881 and in the second, 1900-01. He visited most of the northern regions of the world as a naturalist. In Kipling’s Burwash years Feilden succeeded to the role of “admired older man” earlier played in Kipling’s life by Cormell Price, by Lockwood Kipling, by Sir Walter Besant, and by Charles Eliot Norton. Feilden’s wife Julia (d. 1920) he married in Virginia in 1864.

[Page 194, line 2] ‘little fellow called Roberts’ Lord Roberts, as he became; this was the exploit for which Roberts was awarded the Victoria Cross in 1858.

[Page 196, line 14] ‘Imperial Preference’ Joseph Chamberlain’s policy of special concessions for trade within the British Empire, eagerly supported by Kipling and opposed by the Liberal Party.

[Page 197, line 24] Allen Liner Corrected to “Allan” in later printings. Kipling has confused his ships here. They crossed to Canada on the Canadian Pacific liner S.S. Empress of Ireland. Their return was on the Allan Liner S.S. Virginian. Caroline Kipling’s diary for October 29 notes that Kipling spent “two hours investigating the turbines” on the ship that day.

[Page 198, line 6] Sir William Van Horne (1843-1915) an American naturalized as a Canadian citizen. At the time of Kipling’s wedding journey Van Horne was already president of the Canadian Pacific Railway.

[Page 199, line 16] honorary degree… McGill University at Montreal This was in June 1899, in absentia. Kipling was prevented from going to Montreal to receive it by his near-fatal illness in New York that spring.

[Page 201, line 16] Nobel Prize of that year for Literature Kipling received notification of the prize on November 12. They left for Stockholm on December 7, and King Oskar II died on December 9.