ORG Volume 5, page 2515 records the first publication of this story (Uncollected No. 214) in the San Francisco Examiner of 4 June 1893, The Idler for July,and in the United Kingdom, The Idler Magazine of June 1893.

Sister Ursula is nursing a rich man who lives in a mansion flat. He is on the road to recovery but suddenly loses the will to live and may just turn his face to the wall and die. The Doctor prescribes some medicine which has to be administered every twenty minutes and when it is delivered Sister Ursula is accidentally locked out of the flat.

Very conscious of her duty to her patient, the stout-hearted girl climbs some five or six storeys up a terrifying vertical fire-escape ladder secured to the exterior of the building, enters his bedroom through the window which is fortunately open and gives him the first dose on time.

On the way up, however, she attracts the attention of Cott van Cott, the occupier of a flat on a lower floor who, seeing her on the fire-escape believes she is fleeing to the roof from a fire below, so seizes his most precious possession, a Stradivarius violin with its bow, and follows her up the ladder. The Sister has entered the sick-room and closed the window so van Cott keeps going to the roof much to the amusement of the invalid, who decides not to shoot himself and immediately begins to recover.

In KJ 321 the Editor of the Kipling Journal, David Page, quotes from Kipling’s letter dated 25 September 1892 to Richard Watson Gilder:

I have a short yarn by me …‘ “The legs of Sister Ursula”. The only hint of impropriety lies in the title…

And in another letter dated 10 December 1893 to Edward Lucas White, Kipling writes of the story:

Laughter is also the solvent of despair and hatred. Its impact shivers the insubstantial, impassable wall of of glass between the sufferer and the reality of life. The best example of this is the later tale “The Miracle of St. Jubanus” (Limits and Renewals) … The same theme, however, has been handled nearly forty years earlier … “The Legs of Sister Ursula”

Like many of the early tales, it is an anecdote, no pre-history attaches to it, we are given the rich man in his fifth-storey flat – the scene is American -….In the first paragraph Kipling invokes Sterne – the only time, I think, that he mentions this tightrope dancer over the gulfs of sentiment and ribaldry. The caretaker’s wife prays that there will be no wind; but Sister Ursula’s legs, with elegant ambiguity, appear only in the title …

… laughter to Kipling was as essential to the well-being of man as music to Shakespeare, a bond of union, a strong hold on sanity and health of mind, a relaxation and restoration of human temper …

[Title] The legs of Sister Ursula some religious orders specialise in the care of the sick – see “They” in Traffics and Discoveries, page 75 line 28. At this time ladies wore long dresses down to the floor, a fashion which lasted until the 1920s. A lady would never show more than her ankles. 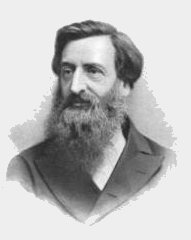 Kipling tells of meeting General Booth (right), the founder of the Salvation Army, on a sea voyage. As they steamed into Adelaide, they saw a woman on a boat which came to meet them who had rucked her petticoats well up to her knees. Booth gestured urgently to her ‘with an imperative repeated downward sweep of the arm.’ As Kipling wrote:

In those days righteous woman ended at the neck and instep. Presently she saw what was troubling the General. Her skirts were adjusted. nd all was peace and piety.
[Something of Myself, p. 102] 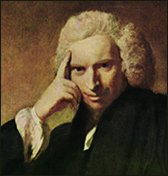 Laurence Sterne (1713-1768) Irish-born novelist and Anglican clergyman (left), best known for his novels The Life and Opinions of Tristram Shandy, Gentleman, and A Sentimental Journey Through France and Italy He also published sermons and memoirs.

china from Persia China and Persia (modern Iran), connected by the Silk Road, exchanged artisans and products from the dawn of history; Chinese potters made glazed tiles, other Chinese craftsmen produced metalwork, miniature paintings, calligraphy, glass and pottery, which found its way westwards to Europe. 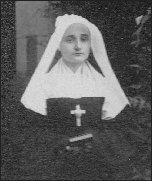 rosary a string of beads used when repeating prayers..

a hundred feet about 30 metres 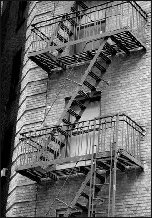 iron ladders a fire-escape, (right) common in many North American cities. Sister Ursula’s ladder was more vertical than this. An attack of cramp would put the climber in great danger. Such a ladder would not be permitted today in Britain or North America.

Lady Godiva 11th century Anglo-Saxon noblewoman who, according to legend, rode naked through the streets of Coventry, in order to gain a remission of the taxation imposed by her husband on his tenants. “Peeping Tom” alone amongst the townspeople watched her and was struck blind.

Quebec Major city and province of Canada. The story opens with a nameless city in a nameless land, so it is not clear why this particular city is mentioned . Dr. Tompkins (above) believes the story is indeed set in America.

This is the cow with the crumpled horn from the nursery rhyme “This is the House that Jack Built” a singing-game where the verses become longer as more characters are introduced:

This is the cow with the crumpled horn,
That tossed the dog,
That worried the cat,
That killed the rat,
That ate the malt
That lay in the house that Jack built.

Sister Ursula may also have been thinking of the echoing line:

‘This is the maiden all forlorn’

leads in this context the lead used to cover the roof.

in vacuo empty – in a vacuum

Her Saint – she that had not prevailed against the Huns legend has it that St. Ursula, a 5th Century British princess on a pilgrimage to Rome, was massacred at Cologne with the other eleven thousand virgins. [Brewer’s Dictionary of Phrase and Fable] See also Lord Birkenhead p.183, and KJ 308/23 for Kipling’s use of ‘Hun’ for the Germans.

canons in this context rigid rules

afternoon visits a social custom of the time. Ladies were “at home” in the afternoon on certain days of the week and would receive calls from ladies and gentlemen, who were entertained with tea and conversation in the drawing-room. 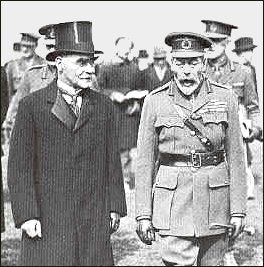 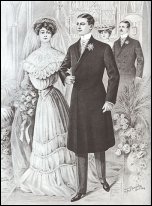 frock-coat a long and elegant jacket (left), often worn with a top-hat.

Strad short for ‘Stradivarius’, a violin made by Antonio Stradivarius
(c.1644-1737) of Cremona, Italy, a famous violin-maker whose products are, indeed, priceless.

(Incidentally, it seems extremely unlikely that a middle-aged man could negotiate such a ladder with a violin in one hand – such ladders require both hands as anybody who has climbed a comparatively short one on a harbour-wall will know: Ed.)