[Page 201] Verses Two four-line stanzas beginning: ‘I will remember what I was…’. Collected in Songs from Books as a Chapter Heading.

Kala Nag, the great elephant, remembers the time before he was captured to work for man. He will break free and, in the story, take part in the Elephants’ Dance. (P.H.) 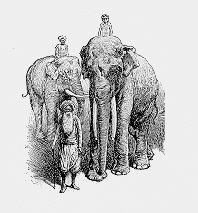 [Page 201, line 11] elephant The Asiatic Elephant (Elephus Maximus) has complex teeth, five nails on the forefoot, and four – occasionally five – on the hind, ears of moderate size, and a smooth trunk without the transverse ridges of the African Elephant.

He attains his full strength and vigour at about thirty-five, and has been known to live to a hundred and twenty years.

He shines most as a special Providence when the cattle of a baggage train or the horses of a battery are stalled in a bog or struggling helplessly at a steep place. An elephant’s tusks and trunk serve at once as lever, screw-jack, dog-hooks and crane, quickly setting overturned carts and carriages right, lifting them by main force, or dragging them in narrow winding defiles where a long team cannot act; while his head, protected by a pad, is a ram of immense force and superior handiness.

In hauling heavy guns, three elephants could do the work of twenty bullocks (see the note on “Her Majesty’s Servants” page 263 line 29).

[Page 201, line 14] Afghan War of 1842 This was the First Afghan War. The British wanted to have influence in Afghanistan, because its neighbour to the north was Imperial Russia. (See the headnote to “Her Majesty’s Servants”)

In 1841 there was a rebellion in Afghanistan against a ruler installed by the British, and a large British force was completelt destroyed as it retreated – by agreement – from Kabul early in 1842. Later in the year the rebellion was suppressed by a fresh invading force, and Kabul was occupied for a short time.

No beast has so many pretty names … For female elephants the word piyari, love or darling, is frequently added to some pretty female name, as ‘Radha Piyari’. (Radha was the wife of Krishna).

[Page 201, line 18] milk tusks This is apparently incorrect, since elephants do not have ‘milk teeth’ like human children.

[Page 202, line 6] piled rifles with butts on the ground and muzzles pointing upwards in threes, forming a wig-wam shaped ‘stand’ made possible by attachments which hooked together. Some old photographs show that additional loose rifles could be added by leaning them between the fixed areas. There was some debate as to whether it was permissible to do this with bayonets fixed, but a photograph from the Crimean War shows two stands of rifles, one with and one without bayonets, so that it was evidently possible for Kala Nag to have backed into the former. The question has also been raised as to why rifles would be piled while shelling was taking place, but they could have belonged to the artillerymen who were serving the guns, which Kala Nag and other elephants had towed into place.

…in consequence of the liability of the male to occasional fits of ill-temper from functional causes [presumabky meaning musth, a periodic state of sexual excitement] it has been decreed that only females are to enter Government service…

Kala Nag would have been recruited well before this decree.

[Page 202, line 16] Emperor Theodore of Abyssinia died by his own hand after defeat at the battle of Magdala by a British expedition commanded by General Sir Robert Napier in 1863, afterTheodore had held British subjects captive. Following a decision in London the expedition was organised by the Indian Government, using Bombay Army troops, both British and Indian.

[Page 202, line 25] Moulmein A port in Burma which shipped out timber from the Burmese teak forests. Kipling saw elephants working there in 1889 (From Sea to Sea, Vol I p. 231). Moulmein also figues in the poem Mandalay, which begins: ‘By the old Moulmein Pagoda…’

[Page 205, line 2] Garo Hills A forested region in Assam in north-eastern India. The elephant-catching establishment was based in Dacca (now in Bangladesh), but was transferred to Burma — then also ruled by the British — in 1900, because excessive catching had depleted the numbers of wild elephants.

‘Mr Sanderson (see the note on p. 214, l.12) speaks of mahouts as ‘rascals more often than not’, and as ‘ invariably superstitious and ignorant’.

[Page 210, line 4] Cawnpore Now Kanpur, in Uttar Pradesh, formerly United Provinces, the scene of Mulvaney’s first acquaintance with an elephant in “My Lord the Elephant” (Many Inventions, p. 43).

Sanderson operated in Mysore and Bengal from 1864 to 1892, with some nine months in the Garo Hills catching elephants for the Army. He appears to have used the keddah system described in the story, which was less cruel than driving the elephants into a deep pit, a method which had also been used. He operated on a large scsle, capturing 3000 elephants in Bengal in eleven years, with the biggest ‘take’ at one time being 136 wild elephants.

He wrote several books, including a technical manual, Pack Gear for Elephants. it is thought that he met Lockwood and possibly Rudyard Kipling. Lockwood mentions Sanderson in Beast and Man in India (see the note on p. 209, l.12) and refers to his ‘admirable book’, Thirteen Years among the Wild Beasts of India .

[Page 217, line 26] Protector of the Poor A respectful form of address to a person in authority.

[Page 218, line 18] elephants dance J Lockwood Kipling, in Beast and Man in India (quoting ‘Colonel Lewin’ on p. 249) tells of a belief in the Chittagong Hill Tracts, east of the Bay of Bengal (now in Bangladesh), that wild elephants gather together to dance. Further, that once he came with his men on a large cleared space in the forest, the floor beaten hard and smooth like that of a native hut. ‘This’, said the men in perfect good faith, ”is an elephant nautch-khana‘ — ballroom.

More modern experts suggest that such trampled areas may be ‘maternity wards’, where females go to calve. J H Williams (“Elephant Bill”) describes the calving of an elephant in Bandoola. The mother and a companion female, “auntie”, selected a place where there was water, shade from a tree, fodder, and silence:

‘One night the mother and the auntie spent a considerable time circling the tree and stamping down the grass until they had flattened an area the size of a circus ring. The maternity ward was complete’

The area flattened, though, would be much smaller than in “Toomai of the Elephants”.

[Page 223, line 2] Dihang River A name for the upper reaches of the Brahmaputra.

[Page 226, line 4] coir rope spun from cocoa-nut fibre, known as ‘grass-line’ in the Royal Navy, where it was used a good deal. It is lighter than hemp, but only a quarter as strong, its great advantage in use is that it floats.

[Page 227, line 10] hog-bear There is no such beast. Probably a misprint for ‘hog-boar’, or more usually ‘boar-hog’, the male of the wild boar of India (Sus cristatus): un-corrected in most editions, including the Sussex, but corrected to ‘hog-boar’ by the Editor of the Oxford World Classics Edition (1987).

[Page 234, line 5] trip-hammers Mechanical hammers used for making ‘drop-forgings’, when they are dropped onto hot metal and press it into a die or mould.

There is a Raja in the hills — a very small Raja — with a very small income, exactly four-fifths of which are spent in maintaining an elephant, the awe and admirarion of his little handful of subjects.

[Page 239, line 12] Pudmini’s leg-iron a wonderful deduction, which has been queried; how could they be sure that it was Pudmini’s leg-iron that cut the bark from the tree ? But perhaps Pudmini and the rope-galled elephant were the only ones with leg-irons.

[Page 240, line 10] jungle-cock ‘Jungle-fowl’ is the name usually appiled to wild members of the genus Gallus, from which the domestic fowl is derived.

[Page 244-245] “Shiv and the Grasshopper” one eight- and two twelve-line verses. The first verses used as a lullaby on p. 244. Collected in Songs from Books.

[Title] Shiv and the Grass-hopper Shiv is Siva, ‘The Preserver’, the third of the great Hindu triad of Gods, the others being Brahma and Vishnu. (Sometimes Shiva is ‘The Destroyer’).

[line 6] Mahadeo another name for Shiva