[Page 75 lines 4 -] Smallest went to Flat-in-Town … etc. the child Digby is taken to London for an operation, probably on his tonsils. Alastair Wilson notes that in the 1930s the removal of a child’s tonsils and adenoids (for no immediate medical reason) was virtually automatic among middle class families in Britain.

[Page 75 line 14] garage-place a mews at the rear of the building with garages and accommodation for chauffeurs etc. 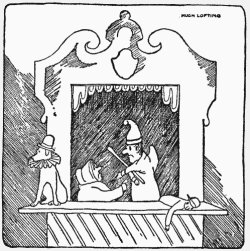 [Page 75 lines 15-20] whistle-squeaky noises …Punch and Judy the classic fairground puppet-show of the English-speaking world, dating back to 1660 or thereabouts, and to the Italian commedia dell’arte.

The figure of Punch derives from the stock character of Pulcinella, which was Anglicized to Punchinello. He is a manifestation of the Lord of Misrule and Trickster figures of deep-rooted mythologies. The show is a dreadful exhibition of wife-beating and generally unpleasant behaviour which is still adored by children today.

See “Baa, Baa Black Sheep” where Kipling uses these names for tne children in the story and “The Man who would be King”, page 242, line 33 , both in Wee Willie Winkie.

[Page 75 line 16] Frill-box a light timber frame covered with coloured canvas, having a stage where the puppets appear.

[Page 76 line 1] whistle-squeaked the operator (Dirty Man) has a reed in his mouth with which he makes the characteristic noises associated with the performance.

[Page 76 line 2] Frill Dog Punch’s dog. Toby, used to appear in the performance but has not been seen so often in recent years. 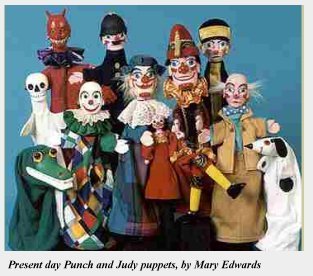 [Page 76 lines 5-12] Dollies came up…. etc the characters in the drama include, Punch’s wife (Judy), the baby, the Policeman, Toby the Dog, the Hangman and a crocodile. In Mary Edwards’s account (see right): Punch is a glove puppet, usually made of carved wood and cloth. He talks with a squeaky voice and is married to Judy.

[Page 76 line 13] showed his inside-hat to Smalls he passed round the audience with his hat seeking contributions but nobody paid anything.

[Page 76 line 15] Garn ! an old ‘Cockney’ expression of contempt and disbelief, a shortened form of the ‘Go and …’ series of remarks, ‘Go and boil your head being a fairly polite example. A Cockney is, strictly speaking, a Londoner born within the sound of the bells of St. Mary-le-Bow in the City of London. There is a characteristic Cockney accent which is reflected in the speech of Dirty Man and his dog. Sadly, few Londoners under sixty would call themselves Cockneys nowadays (2008).

[Page 76 line 20] up-with-the-washing the chauffeur would take the laundry to the country-house where the staff would deal with it.

[Page 81 line 9] shiny-feet-things the boot and shoe cleaning-gear. See “Thy Servant a Dog” page 23 line 24, earlier in this volume.

[Page 82 lines 1-4] grub…. You know fat lots Boots and Slippers have their grub (food) put in front of them and do not know that most people (and some dogs) have to work for a living.

scrappin’ scrapping – in this context slang for fighting

[Page 82 line 21] skin-the-village-alive they would bet on Toby who would obviously win the rat-killing competition. 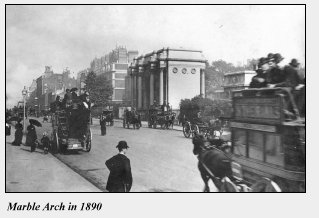 [Page 83 line 6] Marble Arch a monumental arch at the very busy junction of four main roads in the West End of London, and a famous London landmark. Readers may recall Kipling’s poem “A Truthful Song”:

A year ago, come the middle of March,
We was building flats near the Marble Arch…

[Page 83 line 8] pennies-in-my-cup some unfortunates used to beg in the streets, attended by a dog; passers-by would drop coins in the tin mug usually on the ground in front of them.

[Page 84 lines 12-19] first ride after Flat-in-Town etc the pony was a little frisky after too much food and not enough exercise but the child’s legs have grown stronger and he is able to get a grip of his mount, and show off

[Page 84 line 17] Master Digby it was the custom for servants to address the sons of their employers in this manner. Daughters would have Miss in front of their Christian names.

[Page 84 line 18] Seats-and-hands is Heaven’s gifts a good seat in the saddle and gentle yet firm hands on the bridle can be taught but only up to a point – the rider does the rest by instinct.

[Page 84 line 20] Champion Reserve in a Show, the runner-up who comes second.

[Page 86 line 9] looks-of-a-Nangel and the guts-of-a-mongrel ‘angel’ would imply a good-looking if useless hound; ‘mongrel’ is an unfortunate choice of words by Moore to criticise Upstart, since mongrels (cross-bred dogs or hounds) are often stout-hearted, affectionate and clever, as, for instance, Toby himself. But hunting people would put a high value on pure breeding in their hounds.

[Page 86 line 22] Peterborough The Peterborough Royal Foxhound Show Society was founded in 1878. It held over 100 shows to judge working foxhounds for their conformation and activity and had considerable influence over the selection of stallion hounds and dams (the bitches) to produce the working foxhounds for the future. Breeders assessed the virtues of hounds on show and indicated their quality.

[Page 86 line 25] Usurper his sire again unlikely – see line 10 above. Alastair Wilson writes: my text has Bandmaster his sire, which would have been virtually impossible, since, with hounds being given names in annual alphabetical order, it would have implied that ‘Upstart’ had been born when his sire was 20 years old. Perhaps Kipling had this pointed out and changed it between editions, but still got it wrong.

[Page 87 line 25] break-up-and-eat hounds used to be encouraged to eat a little of the fox at a kill to give them a taste for their quarry, but are not now permitted to do so. see the headnote to “The Great Play Hunt”. 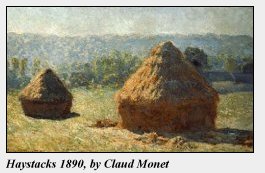 [Page 88 line 7] ricked round ricks stacks of hay or corn, neatly piled up and thatched to keep the weather out were a feature of farm-yards until some time after the 1939 War and were usually infested with rats. Alastair Wilson notes that the purpose of stacking the harvest grain thus was to keep it dry and ready for the thrashing box and its engine when they came; the resulting straw was similarly stacked.

[Page 90 line 4] drag in this context a trail of scent laid by a rider hauling a sack of some smelly substance (line 6) which hounds under instruction can follow. It is also used if there are no foxes about.

[Page 91 line 13] sloped in this context departed, or ‘did a bunk’, usually without paying debts.

[Page 91 line 21] Ravager not being house-trained he would probably not be permitted to some indoors – but see page 96, lines 6-16.

[Page 92 line 8] carrot-basket slices of raw carrot to give to the horses – most likely prepared by a kitchen-maid rather than the butler.

[Page 93 line 14] Belvoir tans pronounced Beaver – an old-established Hunt in Leicestershire , with a pack of Old English Foxhounds of a characteristic colour.

[Page 93 line 16] hand-before-mouth Her Ladyship yawned ostentatiously – rather a lapse from good manners – indicating that she had seen enough hounds for the moment.

[Page 95 line 4] jackal a member of the dog family found in Asia and Africa; Tabaqui, the jackal, is depicted as a cowardly creature in “Mowgli’s Brothers” page 4, line 3 The Jungle Book.

[Page 96 line 4] colder than Cotswold the high ground in the Cotswold Hills in the West Country, where there was another notable Hunt, is likely to be generally colder than the valleys.

[Page 97 line 7] Alsatians also known as German Shepherd Dogs (in German Deutscher Schäferhund) used today as guide-dogs for the blind, also by the police and military..

[Page 98 line 3] Fairy Ann! the Cockney pronunciation (see the note on page 76, line 15 above) of the French ça ne fait rien, ‘it does not matter’; this became a British Army catchphrase in the 1914-18 War and spread into civilian life thereafter.

He is suffering from heart disease and could have had pain in his throat and neck if he were having a heart attack, a myocardial infarction. He would feel cold if his circulation was not working properly and an insufficient blood supply to his brain would have made him think he was cold, as well. This is what might happen with humans and probably much the same would apply to dogs and other mammals. [G.S.]

[Page 99 line 9] plays the dickens a colloquialism for ‘plays the devil’ (from the famous English writer Charles Dickens (1812-1870) with whom Kipling was sometimes compared. See Charles Carrington p. 506