The third of the first group of fourteen, published in the Daily Mail 6 February 1904. Collected in the Sussex Edition vol. 35, p. 126. (ORG Verse No. 839). and in the copyright edition published by Doubleday. Page & Company, New York, 1904. See the Headnote 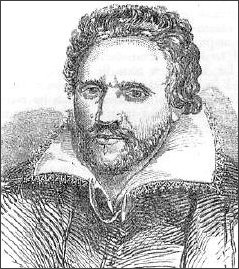 A contemporary of William Shakespeare, he is known for his plays and lyric poems. He was a man of great scholarship with a liking for controversy, which Kipling catches in Jonson’s appearance in “Proofs of Holy Writ” Kipling’s last tale.
Ann Weygandt comments:

“To a Lady, Persuading her to a Car” shows
how familiar he was with the Jonsonian lyric. The title
might as easily be Herrick as Jonson, and Ben seems to
have abandoned his own sweetheart for Daniel’s Delia, but these are minor matters. The form is the tetrameter couplet of “Still to be neat”; the chariot must have been suggested by the one in “Her Triumph”; and jewels and dress-stuffs are particularised as carefully as ever by Jonson himself.

The poet sings of his love, persuading her to dress warmly for their drive (it is an open car), and prays they will not be caught exceeding the speed-limit or have an accident.

[Line 2] Vulcan the god of fire and metal-working

[Line 10] sables the fur of a type of marten (Martes zibellina) then made into luxurious and expensive garments.for ladies.

[Line 12] Euroclydon a brisk wind from the north-east, also any gale or storm. See Acts 27:14: ‘But then there arose against it a tempestuous wind called Euroclydon.’