This, the fifth of the “Tideway” articles, was published in:

The Kiplings experienced two earthquakes, in the usual sense of the word, during their stay in Japan. According to the Carrington extracts from Carrie Kipling’s diary these were on 11 May and 3 June 1892. But another earthquake, figuratively speaking, was about to greatly affect them, and to seriously interfere with, if not destroy, the lives of very many expatriates working in Japan and Eastern Asia generally. This was the failure of the New Oriental Banking Corporation, a London-based bank, originally founded in India, at this time trading exclusively in Asia. Notice of its failure reached Yokohama on 9 June 1892.

The result was that the Kiplings had no funds to pay for the remainder of their honeymoon trip, though Professor Pinney (Ed.) vol 2. p. 55, notes that: ‘there is some evidence that they had already made a decision not to carry it out as originally planned’. The letter cited explains how Kipling had come to be involved in that particular bank: ‘because it is – or rather was, worse luck – my bank in India and in London and it happens to have a branch in Yokohama . . .’

This letter would appear to be the only piece of published correspondence in which Kipling mentions the failure of the bank, which, for the time being anyway, wiped out virtually all his savings, except for about $100 in a New York bank account. In Something of Myself (p.108) he makes mention of the event, describing how he had gone to the bank one morning to draw some money, and the manager suggested he should draw some more: Kipling replied that he didn’t ‘care to have too much cash at one time in my careless keeping,’ but that he might return later that day after he had looked over his accounts. He did so, but ‘in that little space my Bank, the notice on its shut door explained, had suspended payment’.

The ORG notes that: ‘it is understood that the New Oriental Banking Corporation of 40, Threadneedle Street, London … eventually paid its depositors in full – but it took three years to do so. It may also have paid its shareholders, too.’

The first two pages are about the processing of tea: the next two describe an earthquake: the remaining six concern the figurative earthquake which was the bank failure, and its impact on the people Kipling met at the Overseas Club.

[Page 59, line 18] Hakodate part of the island of Hokkaido, on the channel between it and the main island of Honshu.

[Page 59, line 19] Ainos an ethnic group living in some of the northern islands of Japan, and also in parts of Eastern Siberia.

Over a century after Kipling mentioned them, intermarriage has now rendered it difficult to say how many pure-blood Ainos (now usually rendered Ainus) remain.

[Page 59, line 21] Vladivostok a Russian city on the Sea of Japan. One of the termini of the Trans-Siberian Railway, and a military base.

[Page 60, line 10] the tea season Japanese tea is ‘green tea’, and is produced in a very different manner from teas from the Indian sub-continent and Africa. It is also produced slightly differently from Chinese green tea.

[Page 60, line 19] There was never a post-office yet . . .Sabbath into flinders nowadays we are so used to every item of goods being available day-in, day-out, all year, that we forget that tea, in particular, was (and still is) a seasonal crop, and—as with nouveau Beaujolais from France—being first to the market with the new season’s crop was all important to the producers.

So the timely arrival of orders was of great importance, and any delay in the mails could affect a tea-merchant’s business considerably. If the mail was late, it might be necessary to work on the Sabbath to get orders fulfilled in time.

To knock into flinders means to destroy, to break into pieces. The word may derive from the old Norse. [Oxford English Dictionary]

[Page 60, line 23] There is no overtime when the tea-season is in full swing you just work until the work is finished.

[Page 61, line 27] sat and played toccatas stately at the clavicord From “Toccata of Galuppi’s” by Robert Browning (1812-1889), the third line of the sixth stanza. A toccata is a composition for a keyboard instrument. and a clavichord a fore-runner of the piano.

Kipling uses the quotation elsewhere (in “An Habitation Enforced”. in Actions and Reactions, p. 11 line 21) and had known and loved Browning since his schooldays. (See.Stalky & Co. p. 46 line 22) The implication here is that because of the earthquake, the boots of the “bewildered sleeper” were dancing on the floor.

[Page 62, line 13] tea in the pans was burned to a crisp Part of the production process of Japanese tea involves it being steamed, and then dried in a furnace. Evidently, the coolies in the factories bolted, leaving a batch of tea in the middle of the drying process.

[Page 63, line 1] heir of all the ages referring to mankind from “Locksley Hall” by Alfred, Lord Tennyson (1809-92), line 178. [As an aside, this is the poem which contains the much-quoted line: ‘In the spring a young man’s fancy lightly turns to thoughts of love.’ ]

[Page 63, line 5] stoppered warren rabbits live in underground ‘warrens’ which have many exits. When hunting them with ferrets, all the exits but one will be stopped, or ‘stoppered’, i.e., blocked. 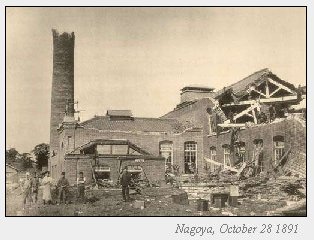 [Page 63, line 18] Nagoya a Japanese city on the main island of Honshu which was hit by a major earthquake on 28 October 1891. The shock was felt all over the whole island.

There was another earthquake there in August 2009.

[Page 64, line 4] telegraphic orders from home the date of closure was 8 June (in London), but because of the time difference, it was 9 June in Japan.

It is of interest to consider this as a practical example of the speed (or, as we would think of it today, lack of it) of communication at that time. Both here, and in Something of Myself (p. 107 line 25 et sequ) Kipling says the bank’s closure was in the afternoon in Tokio: this would have been, say, 2.30 p.m. The time difference is nine hours, which would have meant that it was 5.30 a.m., in London. Assuming that the decision had been taken in London the previous evening, and the cable despatched then – say at 5.30 p.m., then the cable would have taken twelve hours in transmission.

This would have been made up of the delay in writing it out by hand, taking it to the Post Office in London, waiting in a queue for transmission: retransmission at one or more relay stations en route; writing out by hand at the receiving station, and then sending by messenger to the recipient. [The teletypewriter did not appear for another ten years.] See also Kipling’s poem “The Deep-sea Cables”.

[Page 64, line 13] tiffin a word used by the British in India for a light lunch. It originally meant to eat between meals – indeed, it was also used to mean what we might call “elevenses”, a mid-morning snack.

[Page 65, lines 4/5] a thousand dollars it is interesting to speculate exactly what sum Kipling meant. To an American, a dollar was the American dollar, based on gold: but the dollar which circulated freely in the Far East and Japan was the Hong Kong dollar, based on silver: and since 1873 this had been devalued vis-à-vis its American counterpart.

[Page 66, line 20] galleywest to knock sideways, or askew. The first citation in the Oxford English Dictionary is from Mark Twain in 1875, so the word in this form was quite recent, and apparently of US origin. But its root is said to come from the English dialect word colly-west, which has the same meaning.

[Page 66, line 29] free-shooting we were puzzled by this phrase, which does not appear in the Oxford English Dictionary. The ORG makes no mention of it. But thanks to one of our members, Mr. Yan Shapiro, we can say that it probably refers to a shooting which took place in Tokio/Yokohama in late February 1892, which was reported in the New York Times on 7th and 15th March 1892.

[Page 67, line 8] His wife’s at home, too he had banked his cash to send home to his wife, who would now be left penniless.

[Page 67, line 11] the chances of a dividend not in the sense of a dividend paid on stocks and shares, but as creditors, the depositors might hope to salvage something from what assets the Bank actually had. In the event, there was a local meeting of depositors of the Bank in Yokohama on 24 June, in which Kipling suggested that they (the creditors) should accept 25% of their deposit in the Bank’s Preferred Shares (Carrington extracts from Carrie’s diary).

Presumably these shares would be negotiable for cash, though what the value of shares in a failed bank was likely to be would have been uncertain, as shareholders in Britain of Royal Bank of Scotland, and Lloyds Banking Group found out in the banking crisis of 2008/9.

[Page 67, line 12] Bank of England The Bank of England has always been the lender of last resort in the British banking system. In this case, it would seem that Kipling’s bank had what they hoped was a temporary liquidity problem and sought a loan from the Bank of England who refused them, on the grounds that the securities offered as backing for the loan were not good enough – insufficiently reliable.

[Page 67, line 21] Baring’s goes. The O.B.C. don’t. The ORG says: ‘it is difficult to understand this line’, and we would concur. Baring’s was one of the banking rocks of the City of London until 1995, when it became insolvent as a result of one of its traders making (unauthorised) commitments which the bank couldn’t honour. The ORG says that, as written, ‘It should mean that Baring’s closed its doors, but it did not’. 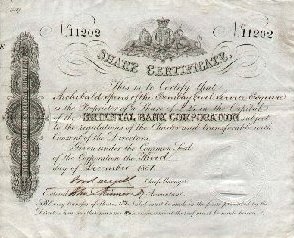 [Page 67, line 28] I’m a shareholder it is surprising to know that an American in Japan was a shareholder, not merely a depositor. The Bank was registered in London, under English law and had its headquarters in London.

[Page 68, lines 21/22] ‘told you so from the first’ the relatives would have had a certain amount of unhelpful justification. The New Oriental Banking Corporation had been in difficulties only six years earlier, when it had been re-organised and re-financed and had metamorphosed from the Oriental Banking Corporation to the New Oriental. It might therefore have been seen as a slightly suspect financial institution.

[Page 69, line 11] Cheltenham, Bath, etc., all well-known as being comfortable towns to retire to on your pension. In fact, Kipling may have been unduly pessimistic about the effects on pensioners at home – their savings would be gone, which would be bad enough, but their pensions would continue to be paid.