The poem reads like a classic Victorian tragedy. A mother has lost her man to the sea and now her child, whose shrouded little body lies in the house. She tries to sing the “Passing Song”, but cannot bring herself to bid the child depart. She seems to hear a cry from the soul of the child, out in the dark, calling to her mother. Prostrate with grief, she does not respond, only to find at last that the cry had come from another dying child. By the time she realises the truth it is too late to save this one either.

Andrew Lycett (page 211) notes that in the summer of 1890 Kipling visited Cormell Price, his old headmaster at the United Services College at Westward Ho ! on the coast of Devon, and that Price’s diary recorded that Rudyard wrote a ballad while staying with him, possibly “The Gift of the Sea.”

If that is so, it might well have been inspired by the sight and sound of the sea, which can be seen below the school, since lines in verses 1 and 15 contain information possibly acquired from fishermen and coastguards in his schooldays. 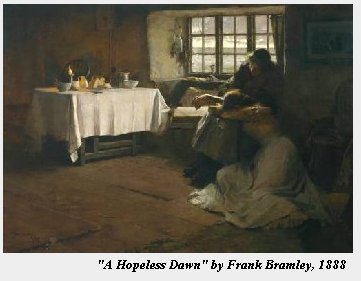 Kipling may also have heard of or seen this painting by Frank Bramley (1867-1916). Its title comes from a passage by John Ruskin, which affirms that Christ is at the helm of every boat. The kneeling woman, comforted by her mother-in-law, realises that her husband is lost at sea, but the open Bible, altar-like table and print on the wall hint at the consolations of religion.

The poem is an amazing piece of work from a young unmarried man. Kipling was, of course familiar with children in India, as reflected in some of his writings at the time in which he shows a remarkable sympathy for them, as witness “Without Benefit of Clergy” and “Little Tobrah” in Life’s Handicap, and “His Majesty the King” and the story “Wee Willie Winkie” in the book of the same name. Also his cynical but often only too true “Nursery Rhymes for Little Anglo-Indians”:

When the hot weather comes
Baby will die…

The death of his much-loved elder daughter Josephine in 1899 from influenza was a personal tragedy yet to come.

[Title] This is tragic irony. The gift the sea gives the mother is a dead husband and a dead child, whom she might have adopted in place of her own, had she answered the call in time. .

shroud a winding-sheet or garment for the dead.

Channel Presumably the ‘English Channel’ between England and France.

“What more can ye do to me ?” If this is a quotation we have been unable to trace it; suggestions will be welcomed.

The deathbed observances here referred to belong to Yorkshire and other parts of the North Country. At the moment of death windows and doors are thrown wide open and strict silence is maintained so that nothing shall hinder the flight of the soul. Before death neighbours come into the death-chamber to pray. This observance is called `The Passing.’ The most famous of the passing songs is a quaintly beautiful hymn, usually called the Lyke-Wake Dirge, one stanza of which runs:
If ever thou gavest hosen and shoon, Every night and alle,
Sit thee down and put them on; And Christe receive thy saule.’

A bell was rung when a person was in extremis, to scare away evil spirits which might have beeen lurking ready to snatch the soul while passing from the body.

Mary the Virgin Mary, the Mother of Jesus.

crib in this context a cradle for an infant.

sea-rime rime ia a word for frozen droplets of water forming a fog, but here signifies sea-water obscuring a window.

lambing ewe a female sheep about to give birth

whin gorse, or—as Kipling calls it in the opening sentence of Stalky & Co.—furze.

They laid a sheet to the door See the note by Ralph Durand above.

tern a seabird similar to a gull

The feel of an empty arm a similar sentiment is expressed in verse 4 of “The Married Man”, one of his later Service Songs (1903):

pier in this context a structure, usually of stone—built into the sea to enclose a harbour for vessels to berth—at an angle to the beach, one wall forms a corner where flotsam accumulates and bodies are usually washed up.