[Page 144, line 1] the Taksali Gate in the West wall of Lahore City, near the corner of the old Fort. There are several references in Kim, but not to the Taksal which was the Mint, in use when many provincial cities issued their own coinage.

[Page 144, line 7] Seal-cutter a craftsman who engraves signet-rings or seals for making an impression on wax to close letters or seal documents.

[Page 145, line 1] Edwardes Sir Herbert Benjamin Edwardes,(1819-1868) Soldier, diplomat and administrator who played a vital part in the Punjab at the time of the Mutiny.

[Page 145, line 12] Kashmiris from the state bordering the Punjab, some 200 miles north of Lahore.

Ladies of the City courtesans.

adulterator one who dilutes goods with something inferior, perhaps sand in the sugar, water in the milk and chalk in the flour.

[Page 145, line 23] Me this is the Author and Narrator, but as Dr. J.M.S. Tompkins warns us: This character (the “I” of the tales) is sometimes indistinguishable from Kipling the writer, but by no means always. [The Art of Rudyard Kipling, p. xiv]

[Page 145, line 32] pleurisy an inflammation of the pleura, the covering of the lung. It may be secondary to such pulmonary conditions as pneumonia, tuberculosis, carcinoma and infarct, or to pericarditis of a rib, or peritonitis. Pain in the side, made worse by breathing is the most characteristic symptom. (William Boyd, A Textbook of Pathology, 8th ed. 1973) [G.S.]

[Page 146, line 2] Peshawar frontier city and garrison some twenty miles from the foot of the Khyber Pass between India and Afghanistan. 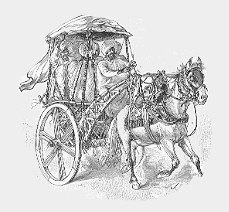 [Page 146, line 16] Ranjit Singh’s tomb outside the North-West corner of Lahore City and fort. He was the founder of the Sikh kingdom and took Lahore as his capital in 1799.

[Page 146, lines 25-26] order of the sirkar against magic The sirkar was the government or supreme authority, from the Persian sarkar, head (of) affairs. [Hobson-Jobson]

This probably refers to Section 420 of the Indian Penal Code – see the Headnote..

[Page 146, line 30] so far from magic being discouraged… This is sarcasm that readers of the time would have recognised. Financial management could readily be seen as a black art, and the Government interfered with the rate of exchange from time to time, with a detrimental effect on people’s incomes.

[Page 148, line 14] boards in this context probably shutters over the windows. 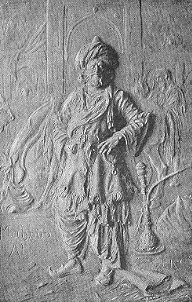 This illustration from Kim by Lockwood Kipling shows Mahbub Ali with a huqua behind him.

[Page 149, line 15] turning-lathe a machine that rotates the article to be turned against a cutter to produce the shape required.

[Page 149, line 31] breathing seventy to the minute the normal rate is twelve.

[Page 150, line 8] thermantidote a primitive form of air-conditioning with a fan inside , worked by hand, which drives a current of air cooled by passing through wet grass mats into a bedroom. It is described in British Life in India [Ed.R.V.Vernède, Oxford 1996, p. 73] thus:

a fearsome machine nine feet long, four feet broad and seven feet high, which sat on the verandah outside a window. The window was removed and in its place a grass mat was fixed. A hole was cut in this to take a funnel projecting from the thermantidote. Inside were four fans turned by hand which drove the air into the room.

To cool the air two large circular holes were cut in the side of this infernal machine in which grass mats were fixed and water was dripped from perforated troughs above onto these mats, and the surplus water fell into other troughs below to be used again in the troughs above. Its chief defect was that it required at least six coolies to work it, not to mention reserves. Later this was reduced to two men by making the water cooling automatic.

[Page 151, line 13] Poe Edgar Allen Poe (1809–1849) American poet and author: the story in question is “Facts in the Case of M. Valdemar” (1845) sometimes known as “Mesmerism tried on a Man at the Point of Death”, and is just that, the man speaking in a hideous voice when apparently dead. See Poe’s Tales of Mystery and Imagination.

[Page 151, line 28] teraphin (or teraphim) household deities worshipped by Israelites, Armenians (Genesis, 35, 2,4} and others. Their use is generally connected with divination ( Ezekiel, 21,21} and they may at one time have been mummified human heads.

[Page 151, line 30] ventriloquism the art of producing a voice without moving the lips – see “The Sendng of Dana Da” (Soldiers Three).

[Page 152, line 14] a woman of masculine intellect condescension by the author, not untypical among men of his time, who would have considered it a compliment.

[Page 153, line 26] the sirkar whose salt he ate. He had worked for the Government many years ago. In ancient times the Romans paid their soldiers and civil servants in salt; when this was replaced by money, it was known as salary from the Latin for salt, salarium.

[Page 153, line 28] cow-devourer they are Hindus who hold cattle to be sacred; for them to eat beef would be sacrilegious and disgusting. Cows can wander unmolested to this day in the streets of many Indian towns, grazing freely. In the first chapter of Kim the boy drives a greedy bull away from the shop of the vegetable-seller, who in gratitude fills the Lama’s begging-bowl.

[Page 154, line 30] white arsenic Janoo will probably poison the seal-cutter as a way out of her difficulties.

[Page 154, line 31] privy a word of many meanings – here signifying one who has knowledge of some matter. The narrator will be implicated if Janoo murders the seal-cutter.