Charges that the Army Medical Service in South Africa was inadequate led to a parliamentary debate and, in July 1900, to the appointment of a Royal Commission of Inquiry. Kipling was one of the early witnesses summoned before the Commission.

Kipling, who. through “The Absent-Minded Beggar,” had been instrumental in raising a large fund for the assistance of soldiers and their families also helped to distribute the supplies purchased by the fund, and in connection with this work had seen much of the army’s medical arrangements in South Africa. 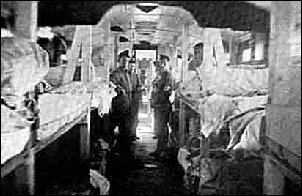 His article entitled “With Number Three”, originally published in the Daily Mail ( 21, 23, 24, 25 April 1900) is an account of a journey on a hospital train earning wounded back from the fighting at Modder River; he had also published an account of hospitals in Cape Town in an article entitled “Surgical and Medical” (Daily Mail, 1,2 May 1900). There is a description of Kipling at work distributing food and water on a hospital train and cheering up the wounded in Dorothy Menpes’s War Impressions, London, 1901, 121-22. Kipling’s reference in his testimony before the Hospitals Commission to distributing pyjamas is given a comic twist in Something of Myself:

Once I took a bale of them [pyjamas] to the wrong nurse (the red capes confused me) and, knowing the matter to be urgent, loudly announced: ‘Sister, I’ve got your pyjamas.’ That one was neither grateful nor very polite” (p. 151) 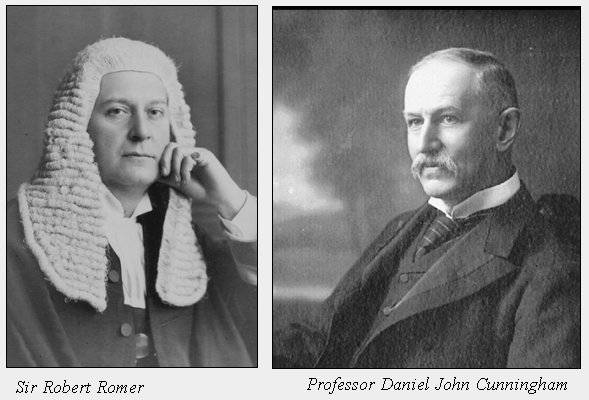 The chairman of the Commission was Sir Robert Romer (1840-1918), Lord Justice of Appeal; Professor Cunningham was Daniel John Cunningham (1850-1909), Dean of the Medical Faculty, University of Edinburgh.
The Commission’s report in January 1901 found no “scandal” in the provision of medical services in South Africa but concluded that the scale of provision was inadequate and that the quality of the staff should be improved.

MR. RUDYARD KIPLING was the next witness. In reply to the CHAIRMAN, who asked him to tell his own story in his own way about the condition of the South African hospitals, he said:—I landed in Cape Town about February 6. From that time to the end of the month I was generally in and out of the Cape Town hospitals. My experience is confined entirely to the Cape Town hospitals. I went to No. 1, No. 2, and No. 3 hospitals—not to Woodstock at all. I took particular care to go with the official doctors in charge of the hospitals and we discussed all sorts of indifferent matters, and
I asked incidentally if they had everything that they wanted.

They said there was no particular strain and the hospitals were by no means full. They had everything and did not need anything at all. I went to the nurse, and I asked the nurse:—“What do you want, because I can get things out of the A.M B. (Absent-Minded Beggar) Corps, and there may be some odds and ends you may want.” The reply was:—“We want pyjamas. Don’t bring them to the store issue department, but bring them to the back door.” So I got 98 pairs of pvjamas and unloaded them at the back entrance and gave them quietly to the nurse. I went to another hospital and I asked the same question and received practically the same answer—that it was not any good taking it to the officials, but if I would quietly bring pyjamas and also slips they would feel much obliged, because the nurses there said there was a difficulty in getting pillow-slips or pyjamas. I also had the same answer from the nurse of a hospital train. There were three hospitals which 1 visited in February before there was any strain, when the doctors gave me to understand that they needed nothing, and they were exceedingly well pleased with themselves. Later in February, about the time the Yeomanry were coming over, I visited the Maitland Hospital, a few miles out of Cape Town. In that hospital there were a large number of unsorted men coming out from England, and they had no medicine except boric acid and quinine pills. I went to the druggists, after consulting a professional man, and sent over a few pounds’ worth of medicine. They were willing to take things privately, and there was no acknowledgment, and none desired, of course; but the general impression was that they got them quicker that way than through the store department.

In reply to PROFESSOR CUNNINGHAM the witness said:—if I had given those things openly to the stores, I should have got the people into trouble. I knew from the doctor of the Maitland through a friend that they wanted these drugs. The Army Service Corps and the Royal Army Medical Corps were in want of these things. It took them, as they said, for ever and ever to get them from the stores department. It saved time to get them otherwise than though the stores.

THE CHAIRMAN.—Had they got them?

—I do not for a moment say that the stores were not there. I was told explicitly that they were there, but they could not be got at. We were sending absolutely the same thing that they had, but the things got at once to the patients, who would have wanted if we had not sent them. After that I went with a hospital train, and saw the wounded come down. There was nothing bad, and everybody was working very hard. The system at Cape Town was slow and cumbrous, and I felt it was much better to have the things sent in another way when a man’s life was at stake. I went through four or five town hospitals at Bloemfontein—that was before we had any epidemic and before the waterworks were cut.

What was their condition?—Very good; but they were all under cover. I did not go to the tents. The enteric was beginning then, and there was an advertisement in the paper 1 had the honour to be connected with inviting people to give beds and blankets and bedding. The hospitals were pretty clean. The Dutch had been using them before and they smelt a bit. That was before the heavy strain began. I was there 12 days. I left before the big epidemic. There was no enthusiasm about nursing enterics—they were long and troublesome, and not as interesting as the wounded. There was not much heroism about the enterics.

What did you do next?—I went back to the Cape, and there were more and more enterics. The hospitals were perfectly clean, and everybody was working verv hard; but there was always this quiet complaint about the excessive slowness of getting at anything in the stores. Throughout that was the note. I stopped there till the end of April. I was in South Africa from February to May.

You did not go to Woodstock?—No. The air was foul and the place was simply unspeakable. The drains ran out there, and the place stank.
—The Times, 2 August