The story tells how Surjun, from a village near Allahabad, went to South Africa and made his fortune at Kimberley in the diamond fields. This did not come from working as a miner but, with a partner, selling necessities such as boots and clothing to the miners.

In 1866, Erasmus Jacobs found a small brilliant pebble on the banks of the Orange River, on the farm De Kalk leased from local Griquas, near Hopetown. The pebble was purchased from Jacobs by Schalk van Nierkerk, who later sold it in London, and turned out to be a 21.25 carat (4.25 g) diamond. Nierkerk sold the first diamond for £500, and then three years later sold another diamond also found in the De Kalk vicinity for £11,200. The second diamond was promptly resold in the London markets for £25,000. In 1871, an even larger 83.50 carat (16.7 g) diamond was found on the slopes of Colesberg Kopje by Esau Damoense, the cook for prospector Fleetwood Rawstone’s “Red Cap Party,” who was sent to dig on the hill as a punishment for being drunk. This find led to the first diamond rush into the area. 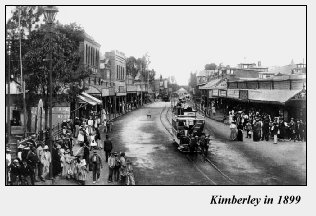 As miners arrived in their thousands, the hill disappeared, and became known as the Big Hole. From 1866 to 1914, 50,000 miners dug the hole with picks and shovels, yielding 2,722 kg of diamonds. A town, New Rush, was formed in the area, and was renamed to Kimberley on 5 June 1873, after the British Secretary of State for the Colonies at the time, John Wodehouse, 1st Earl of Kimberley.

Very quickly, Kimberley became the largest city in the area, mostly due to a massive African migration from all over the continent. The immigrants were accepted with open arms, because the De Beers company was in search of cheap labour to help run the mines. On 2 September 1882, Kimberley became the first town in the southern hemisphere to install electric street lighting.
[Source: Wikipedia]

The rapid growth of Kimberley, like the gold rush in the Yukon in America, generated a great deal of wealth and commerce, which traders like Surjun were quick to take advantage of. Many fortunes were made—and lost. At this stage in his career Kipling had not yet been to South Africa.

[Page 373, line 21] Purbeah an Indian people originally from Oude in the Bengal Presidency.

[Page 374, line 10] Chyebassa a town near Jamshedpur, Bengal. There have been several British India ships named after this town, and Kipling refers to a vessel of this name in his story “The New Dispensation—II” collected in Abaft the Funnel (page 294, line 13).

[Page 374, lines 25 to 30] pennies, pence, shillings Rather than converting all of these references into post 1971 decimal currency, it is worth noting that in pre-decimal days there were:

Since decimalisation there have been 100 new pence (p.) to the pound Sterling. Thus one ‘shilling’ in old currency would be 5p. in decimal currency.

[Page 375, lines 20 & 21] series of clicks the special ‘click’ consonants which are part of the Zulu and Xhosa languages, for example, in Southern Africa.

[Page 376, line 9] vootsac ‘get out’ in Afrikaans (the old Dutch dialect used by the Boers in South Africa) [ORG]

[Page 376, line 16] Shoot… in the compound after nine o’clock in those days, if a native was found in the house (not the garden) after a certain time the householder could shoot for the protection of his household. [ORG]

[Page 376, line 19] Aidibi I.D.B.—illicit diamond broking. The official trade in diamonds was tightly regulated, but inevitably stones would ‘disappear’ and be sold and resold in illicit transactions.

[Page 377, line 31] Jhusi a very ancient site across the river from Allahabad whence ships are said to have sailed to islands on the equator to carry the Hindu religion further East. The river is the Ganges, but two or three miles down river from Jhusi that great tributary the Jamuna joins the Ganges. [ORG]