The edited text largely corresponds with that first published in the Pioneer of 23 November 1889.

Outspoke der bold Von Stossenheim,
Who had théories of Gott:
“O Breitmann, dis ish shoodgement on
De vays dat you hafe trot.
You only lifes to joy yourself,
Yet you, yourself moost say,
Dat self-defelopment requires
De réligiös Idée. 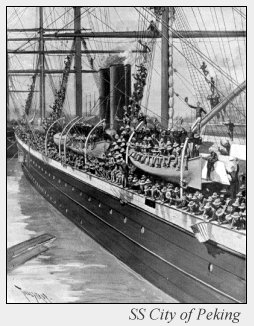 [Page 457, line 5] Vicksburg and Shiloh Battles of the American Civil War, Vicksburg in 1863 and Shiloh in 1862. Both were won by the Union Forces under Ulysses S. Grant. (See this site.)

[Page 457, line 13] the Midland The Midland Railway was at the time one of the great independent systems of England, formed in 1844 by the amalgamation of several other companies and based in Derby.

[Page 458, line 11] the Manila State Lottery The Philippine archipelago was at this time still under the control of Spain, Manila being one of the chief cities. Historically, lotteries have been in existence in the Philippines as early as 1833. Under the auspices of private enterprises called Empresa de Reales Loteria Espanolas de Filipinas, the Spanish Government conducted loterias to generate revenues.

[Page 458, line 32] four-master she was square-rigged on three masts and fore-and-aft rigged on the aftermost mast, to supplement her 5,000 h.p. compound steam engine.

[Page 460, lines 18 & 19] bull-board bull is a deck game in which pads are thrown at an inclined board known as the ‘bull-board’. [Chambers Dictionary]

[Page 462, line 29] Lucknow Division Lucknow was the capital of the Province of Oudh, about 160 miles northwest of Benares (now Varanasi).

[Page 464, line 8] red-tapeism an applied to routine work when strict rules and procedures are followed without thought, mainly by government departments and public servants. The word derives from the coloured tape used to secure files of documents.

[Page 466, line 14] Home Rule a political movement which gathered pace in the 1870s aimed at securing self-government for Ireland, the issue being unresolved in 1889. At that time Ireland was part of the United Kingdom, and Irish MPs sat in the Hiouse of Commons. The Liberals were sympathetic to the principle of Home Rule, the Conservatives (and Kipling) were against it.

[Page 466, line 27] commination service a denunciation that is part of the Book of Common Prayer. [D.H.S.]

[Page 467, line 2] consorting with Russians Tsar Alexander III had been assassinated by anarchists in 1881, despite having freed the serfs. Unfortunately this had resulted in the serfs being in a much worse situation. Alexander’s son Nicholas II was not interested in liberal policies and his clampdown caused increased agitation in the general population, well before the first attempt at revolution in 1905.

[Page 467, lines 21 & 22] bombs thrown at Chicago This riot in Chicago occurred on 4 May 1886, when police dispersed a demonstration by strikers at the McCormick Harvesting Machine Co. Violence exploded after an unidentified person threw a bomb. When the rioting ended there were seven policemen dead and sixty other people injured. [D.H.S.]

[Page 467, line 29] riots in New Orleans the presence of many immigrant workers prompted a backlash by the established Americans. One example was he declaration of martial law in New Orleans to quell violence in the 1870s. [D.H.S.[] 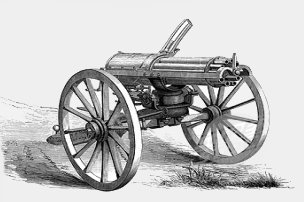 [Page 467, line 30] the Gatling was a mechanical machine gun with six rotating barrels, designed in 1861 with a patent taken out in 1862 by Dr. J. R. Gatling (1848-1903). He was an American doctor but never practised. The Gatling was eventually superseded by the Maxim machine gun which was not hand-cranked but used the gas or recoil blowback concept.

See Wikipedia. See also “Judson and the Empire” (Many Inventions), and “Erastasius of the Whanghoa” (Abaft the Funnel).

[Page 469, line 12] raise one within your own borders as Kipling noted, this was a most unfortunate remark in view of the fact that the American Civil War had only ended in 1865, twenty-four years earlier.

[Page 469, line 25] old hooker originally a short tubby little sailing vessel, the term is also applied, part affectionately and part contemptuously, to any vessel when she grows old. As Noah (he of the Ark) says in Kipling;s “A Truthful Song”:

“Your wheel is new and your pumps are strange,
But otherwise I perceive no change;
And in less than a week, if she did not ground,
I’d sail this hooker the wide world round !”

[Page 469, line 26] Put the engine room aft the Nation is too broad east to west, especially with the capital, Washington, on the eastern edge. [D.H.S.]