The edited text largely corresponds with that first published in the Pioneer of 12 December 1889.

[Page 3, line 2] slangander defined by C.G. Leland in his “Glossary” to The Breitmann Ballads as “foolishly slandering”. He uses the word in “Breitmann in Politics—”, Part III, “Pardt de Secondt”, 12th stanza:

[Page 5, line 20] own poets the author of the couplet which follows this line is Henry Wadsworth Longfellow (1809-1882). The quotation comes from his “The Student’s Second Tale: The Baron of St Castine” in Tales of a Wayside Inn. The original second line is: ‘And the Somebody comes and begins to blow’. 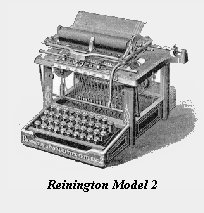 [Page 6, line 32] No. 2 Remington The first typewriter, the Model 1, was manufactured in 1873 by E. Remington and Sons, the gun-makers of Ilion, New York. The Number 2 was introduced in 1878 and was the first machine to produce both upper- and lower-case letters. [The Rotarian, March 1914, “The Evolution of the Typewriter” by Alan C. Reiley, Dept Manager, Remington Typewriter Co.].

[Page 8, line 19] Drury Lane pantomime a reference to the Theatre Royal, Drury Lane in London, England. The theatre was first licensed to Thomas Killigrew by King Charles II and opened in May 1663. The present building opened on 10 October 1812.

The ‘pantomime’ is a hallowed British institution, much loved by generations of children and their parents. Pantomimes are musical comedies, usually performed at Christmas-time, and based (very loosely) on a fairy story ot folk-tale such as ‘Cinderella’, ‘Aladdin and the Wonderful Lamp’, ‘Dick Whittington and his Cat’, etc.

[Page 10, line 32] a Yoruba a people in West Africa, found predominantly in Nigeria. Many of the original slaves were taken from that region. 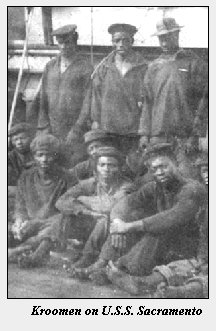 [Page 11, line 7] Kroomen Or ‘Krumen’, skilful seamen and daring fishermen from the coast of Liberia and the Ivory Coast in West Africa, who in Kipling’s day were often recruited into the Royal Navy and the United States Navy.

[Page 11, lines 25 to 30] Daniel . . . Shadrach . . . Meshach . . . Abednego references from the Old Testament “Book of Daniel”. King Nebuchadnezzar’s decree that whoever did not bow down and worship his golden image should be cast into a burning fiery furnace, and subsequent events, are related in Chapter 3.

[Page 12, line 4] Zanzibar stick-dance Originating in Zanzibar and its associated islet, Pemba, the energetic stick dance is performed by men wearing special costumes carrying a long narrow stick in their hands. It is danced at weddings, circumcisions, and other festive occasions.

[Page 12, line 5] Aden on the coal boats In the early days of coal-fired steamships, the vessels often could not carry sufficient coal to complete their voyages. In consequence coaling stations were set up where they could refuel. Aden, on the coast of the south west Arabian Peninsula, was one of them. It is now the capital of the People’s Democratic Republic of Yemen

[Page 12, line 14] miscegenation The mixing or interbreeding of (people of) different races or ethnic groups, esp. the interbreeding or sexual union of whites and non-whites. [Oxford Emglish Dictionary].

[Page 13, line 19] blatherumskite a blustering talkative fellow is the Oxford Emglish Dictionary definition of the American (and Scottish) colloquialism “blatherskite”. Variants include “bletherumskite”.