The edited text largely corresponds with that first published in the Pioneer of 7 January 1890.

Kipling heads east from British Columbia across the Rockies to Livingston, Montana for 2 July, then to the Yellowstone Park in Wyoming. He arrived at the Mammoth Hot Springs Hotel by 5 July and left on 10 July. See also The Letters of Rudyard Kipling, Ed. Pinney, for 30 June, 2 July, 5 July, and 10 July 1889, pp.325-331.

[Epigraph, Page 53] But who shall chronicle the ways . . . This four line epigraph is taken from verse XXXVI of “The Sleep of Sigismund” by Jean Ingelow (1829-1897), an English poet and novelist. It is collected in her book of verse Poems of the Old Days and the New (1885).

[Page 53, line 2] Victoria is a city of the south-east corner of Vancouver Island, Canada.

[Page 53, lines 12 & 13] chain-gang a chain-gang consisted of a group of prisoners whose legs were usually shackled together by a short length of chain (about 4 ft.), the other end being shackled to a long chain. This enabled to prisoners to carry out heavy labour such as road construction or breaking rock, but not sufficient freedom to escape. Although best known for its use in the U.S.A., this method of handling prisoners was used in many colonies of the British Empire as well as other countries in the 19th and 20th centuries.

[Page 53, line 13] shot-drill was a punishment prescribed for defaulters in the Services in former days, in which a spherical cannon shot weighing several pounds was tossed from man to man.

An alternative used in prisons consisted of stooping down without bending the knees, picking up a heavy cannon-ball, bringing it up slowly until it was on a level with the chest, taking three steps to the right, replacing it on the ground and then stepping back three paces to start the procedure all over again. Warders shouted orders while prisoners, sweating profusely, moved cannon-balls with precision from one pile to another. [ORG/D.P.]

[Page 54, line 21] griffins One newly arrived in India, and unaccustomed to Indian ways and peculiarities.[Hobson-Jobson]

[Page 55, line 16] The Parthia was a steamship launched in 1870 for the Cunard Shipping line for use on the North Atlantic run to New York. In 1885 she was acquired by the Guion company. However, in 1887 she was transferred to the CPR and sailed for them in the Pacific until 1891. At this time, she was transferred back to the Guion Company and underwent a modernisation refit, emerging under the new name of Victoria. She continued her career in various roles until she was finally dismantled in 1956, after a life of 86 years.

[Page 55, line 25] the old flag the Union Flag of the United Kingdom (otherwise the Union Jack).

[Page 56, line 2] invest in real estate Kipling bought two lots in the Mount Pleasant district of Vancouver and held them until 1928.[Pinney, The Letters of Rudyard Kipling, note 9 p.326 to a letter to Mrs Edmonia Hill of 30 June.]

[Page 57, line 18] Victoria and Esquimault Esquimault, now a western suburb of Victoria, was adopted as a base for ships of the Royal Navy on the Pacific Station in 1854 two years before the Second Opium War. [ORG].

This location is strategically situated at the junction of the Strait of Juan de Fuca, the Strait of Georgia, and the Puget Sound.
See also “Vancouver Island and the Kiplings” by John F. Bosher, Kipling Journal June 2009 (No.332, pp.8-22).

[Page 57, line 20] Vladivostok the Russian seaport city which is now the eastern terminus of the Trans-Siberian Railway. At about 43 degrees latitude, it lies on the Sea of Japan and is about 4600 miles west of Vancouver.

[Page 59, line 33] Eastward then to Montana Kipling took the Northern Pacific Railroad from Tacoma going via Stampede Tunnel and passing through Pasco Junction and Helena to reach Livingston in Montana for 2 July. From Livingston he went via a spur railroad to the Yellowstone National Park where he stayed from 5 to 11 July.

[Page 60, line 17] Montgomery a town now in Pakistan, south-west of Lahore and about half way to Multan.

[Page 60, line 29] Pasco Junction in Washington Territory on the Columbia River in Franklin County. At this point the Northern Pacific Railroad heads northeast towards Spokane and then briefly across northern Idaho. It continues through Montana via Missoula, Helena and Bozeman to reach Livingston.

[Page 61, lines 23 & 24] crossing the Rockies the railroad climbs the western side from just after Spokane, and descends to the east about Bozeman.

[Page 61, line 27] Indian reservation an area of land reserved for the use of Native Americans only. The Flathead Indian Reservation is in Montana and Idaho, just north of Missoula.

[Page 61, line 28] a Flathead This Nation consists of the Bitterroot Salish, Kootenai, and Pend d’Oreille Tribes. See more information and photographs at Wikipedia. 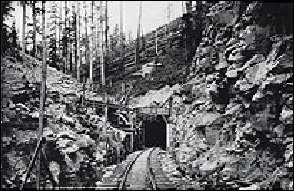 Kipling must have confused his timetable since the tunnel is in Washington Territory, crossing the Cascade Mountains in King County after leaving Tacoma and before reaching Ellensburg. The tunnel is just to the south of the Shoqualmie Pass.