The edited text largely corresponds with that first published in the Pioneer of 16 November 1889.

[Epigraph page 428] And the Duke said … This echoes the first chapter of the Book of Genesis, decribing the Creation: ‘And God said, ‘Let there be Light…’

[Page 429, line 20] Gurkha These soldiers from Nepal have served in the British Army with great distinction since about 1817.

[Page 430, line 25] rifles at the carry in ‘the carry’ the rifle is held vertically close in to the shoulder with the muzzle pointing straight up.

[Page 432, line 23] martingales straps running from the nose-band down to the saddle-girth below the horse’s abdomen to prevent it from tossing its head and rearing up.

[Page 432, line 23] breastplates a set of straps that pass round the horse’s neck and are attached to the saddle to prevent the saddle sliding backwards

[Page 432, line 24] crupper a strap attached to the rear of the saddle that passes along the horse’s back with a loop at the end through which the horse’s tail is passed. This is designed to prevent the saddle from sliding forwards.

[Page 432, line 25] numdahs saddle pads made from a coarse felt, manufactured in India.

[Page 432, line 26] thirteen-hand pony a hand equates to 4 inches, so these ponies would measure 4ft 4in to the shoulder. The average polo-pony in India would be 14 hands or 4ft 8in.

[Page 432, line 28] bridoon the snaffle (curbless bit) and rein of a military bridle, which acts with or independently of the bit.

[Page 433, line 5] picture in Alice in Wonderland this is a mistake by Kipling. The ‘armed men coming through the woods’ and the White Knight appear in Chapter 7 of the sequel, Through the Looking-Glass and What Alice Found There by Lewis Carroll (Charles Lutwidge Dodgson, 1832-1898).

Both picturer are by Sir John Tenniel (1820-1914). Neither does credit to the Imperial Japanese Cavalry.

[Page 433, line 11] entires stallions, ie male horses which have not been castrated. 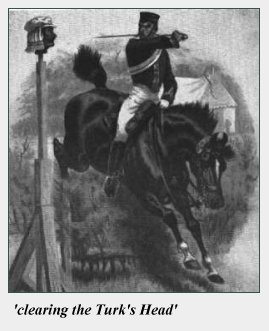 [Page 433, line 18] Turk’s head an imitation head, something like a long-handled broom, used as a target for sword-drill by cavalry.

The Sydney Mail of November 1894 describes a Cavalry Tournament under the auspices of the No.1.Parramatta Half-Squadron New South Wales Lancers, one of the events being “Cleaving the Turk’s Head”. See this web-site.

[Page 434, line 33] lathy a lath is a long, thin strip of wood. Robert Browning, one of Kipling’s favourite poets, in “The Flight of the Duchess” (v.5) refers to ‘a lathy horse, all legs and length,’ meaning that the horse was tall and slender.

Kipling used the same word to describe the horse “Tiglath Pileser”, collected in Abaft the Funnel.

[Page 437, line 1] counter-jumper One who jumps over a counter: applied in contempt to a shopman or shopkeeper’s assistant. [Oxford Engliah Dictionary]

[Page 438, lines 4 & 5] American Revision Treaty Between 1854 and 1869 the USA and many European counties entered into treaty relations with Japan, leading to the opening of Treaty Ports, exemptions of their nationals from Japanese court jurisdiction and lowered duties on trade goods entering Japan. By the 1870s there was strong Japanese pressure for ‘revision’ of these treaties. In 1889 several countries including the USA made substantial progress towards revisioin, whereupon Japanese public opinion veered round, opposing some aspects of ‘revision’. [ H.C./G.W.]

“My friend Sir Roger heard them both … and after having paused for some time told them, with the air of a man who would not give his judgement rashly, that much might be said on both sides.” [ORG]

[Page 439, lines 1 & 2] Count Smorltork is a character in The Pickwick Papers by Charles Dickens (1812-1870). He was “the famous foreigner—gathering materials for his great work on England” and getting everything wrong.

[Page 441, line 4] King John at Runnymede a reference to the granting of Magna Carta by King John to the English barons at Runnymede by the River Thames. The Great Charter was one of the pillars of the freedom of the English people from the arbitrary authority of the Crown. [See “The Treasure and the Law” in Puck of Pook’s Hill]