The edited text corresponds with that first published in the Pioneer of 11 July1889.

Readers will find a map useful for following this report. A good one is to be found at this web-site.

[Title] Goblin Market a ‘children’s’ poem of this title composed by Christina Rossetti (1830-94), published in 1862. She was a sister of Dante Gabriel Rossetti.

[Title] Scunner to take a strong dislike to something, in this case what Kipling terms the ‘Goblin Market’.

[Page 302, line 7] the Canton trip a journey from Hong-Kong to Canton (or Guangzhou or Kuang-chou) Canton is a city on the Pearl River (sometimes called the Canton River). It is about 85 miles north-west of Hong-Kong up the river. It is now a major manufacturing centre for world trade. 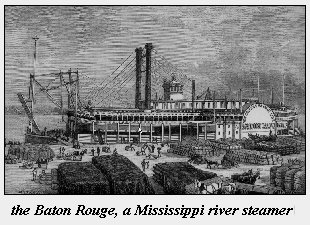 [Page 302, line 8] American river-steamer a paddle steamer propelled either by a pair of side paddles or a single stern-wheel. The larger and faster vessels on the rivers tended to be side-wheelers whereas those able to operate in shallower water were stern-wheelers.

[Page 302, lines 9 & 10] Irrawaddy flotilla a fleet of vessels operating in Burma (now Myanmar). The Company also had both small stern-wheel and larger side-wheel paddle steamers but they do not appear to have had the twin-funnels of the American craft, and did not have so much freeboard. See our notes on Chapter II.

[Page 302, line 12] walking-beam the walking beam engine was a type of steam engine developed in America from the early pumping engines installed by James Watt in many mines in Cornwall in the south-west of England in the late eighteenth century. The beam in pivoted in the centre above a vertical cylinder and transmits the motion of the piston down to a crankshaft by a long connecting rod. [The Oxford Companion to Ships and the Sea, ed. Peter Kemp].

[Page 302, line 17] put under hatches piracy continued in a healthy fashion in the China Seas. Kipling’s story “Erastasius of the Whanghoa” gives an excellent description of the problem. In Voices from the Past by Solomon Bard, there is a copy of a news report from the Hong Kong Daily Press of 17 March 1917 that:

Pirates are still at large along the West River. Captain Jones—Master of river steamer Kochow—reported while on a voyage from Waichow to Hong Kong … five passengers suddenly produced revolvers, took possession of the vessel, overpowered the master—who was wounded by revolver shots. They stole $8,000 from a Chinese official and $1,200 from the Compradore. They then left the ship by [the] ship’s boats.
[Voices from the Past] .

[Page 303, line 1] Sniders These Snider rifles would have been Snider conversions of the earlier Enfield rifle to breech-loading using the mechanism invented by the American Jacob Snider. They were in the process of being changed for the Martini-Henry. 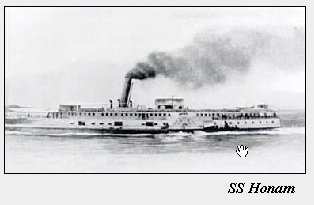 There is an advertisement for the Hong Kong – Canton ferry service on page 71 of A Trip on the West River: New Going (and) Coming by R.D. Thomas, 1903, (The China Baptist Publication Company, Canton, China).

This shows that at that time there were five vessels including the S.S. Honam operating with departures at 8 a.m. and 5 or 5.30 p.m. from both Hong Kong and Canton. See this web-site.

[Page 303, line 28] Hughli or Hoogli river which flows past Calcutta into the Bay of Bengal.

[Page 304, lines 9 & 10] the books are audited somewhere else … Kipling is again demonstrating his ambivalent attitude towards ‘official’ religions.

[Page 304, line 23] John short for ‘John Chinaman’, a stock caricature expression for a Chinaman in the 19th century.

[Page 304, line 25] chitterlings the small intestines of a pig or other edible animal, prepared as a dish of food.

[Page 305, line 18] Malthusian a follower of the principles of the Rev Thomas Robert Malthus, FRS (1766-1834). Malthus was widely known for his theory whereby improvements in society due to population growth would eventually be checked by famine and disease.

[Page 307, line 5] Jesuit Fathers members of the Roman Catholic Society of Jesus. They were missionaries to China from the second half of the 16th century and dominated missionary work there until the 19th century.

[Page 307, line 10] Marco Polo a Venetian merchant (c. 1254-1324) who travelled with his father and uncle thoughout Asia and wrote a book about their adventures titled Il Milione, better known in English as The Travels of Marco Polo. 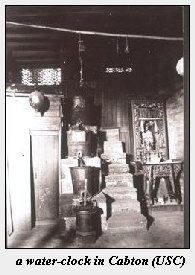 [Page 307, lines 18 & 19] an old water-clock of four gurrahs The ORG defines a gurrah as a large circular earthenware water container. There is a photograph of a water-clock in Canton (Guangzhou) on the internet site of the University of Southern California (USC) “Internet Mission Photography Archive”. Although undated, the device does have four water containers and could be the one referred to by Kipling.

[Page 307, line 31] the Potter’s Field Probably the reference here is to Matthew 27,7-8 and Acts 1,19. “The Potter’s Field” or Aceldama was called “The Field of Blood”; it was where Judas Iscariot, the betrayer of Jesus, met his death. [ORG]

[Page 308, lines 19 & 20] the Little Pilgrim’s account of the Hell of Selfishness This could be a reference to The Little Pilgrim, a children’s magazine produced in the USA by Grace Greenwood (a pseudonym for Sara Jane Lippincott) between 1853-1868 but this Editor has found no reference to “selfishness” in the text. The alternative, and more likely possibility is to the novel, A Little Pilgrim by Margaret O. (Wilson) Oliphant (1828-1897), a rather saccharine story where in the first chapter, “In the Unseen” there is thid passage:

“That makes me think” said the little Pilgrim; “if I have died, as you say—which is so strange, and me so living–if I have died, they will have found it out. The house will be all dark, and they will be breaking their hearts. Oh, how could I forget them in my selfishness, and be happy! I so light-hearted, while they—”

[Page 308, line 25] Madame Tussaud’s (1760-1850). She founded a waxworks museum in Paris and in 1802 transferred it to London, initially to Baker Street. In 1885 her grandson moved the exhibition to its current location in Marylebone Road, just round thre corner from Baker Street.

The special reference is to the “Chamber of Horrors” in the exhibition which showed men on the rack, under the guillotine, and undergoing many other forms of torture.

[Page 308, line 26] brayed in mortars broken, pounded or ground small in a mortar (with a pestle by implication).

[Page 309, line 22] English guns spiked and abandoned after the war. there were two Anglo-Chinese ‘Opium Wars’ before Kipling’s visit to China in 1889, fought by the British to ensure the continuation of their profitable export of opium to China. (See Kipling’s In an Opium Factory in From Sea to Sea vol II, page 331, published the previous year.)

The first Opium War was from 1839-42 and the second from 1856-60, in both of which the British achieved their objectives. A gun was ‘spiked’ by hammering a metal spike into the touch-hole, rendering it useless.

[Page 309, line 30] durbar-hall a room for holding audiences. The word is of Indian origin.

[Page 310, line 3] ‘little red button a-top’ a reference to the Grand Panjandrum, an imaginary figure of great power and self-importance made up by Samuel Foote, an 18th century English wit, actor and dramatist.

[Page 310, line 12] Gatling the Gatling gun was invented in 1861 by Dr Richard J Gatling. It was a hand-cranked semi-automatic weapon with multiple barrels.