The edited text largely corresponds with that first published in the Pioneer of 11 October 1889. I

[Epigraph, page 379] Oh, brave new world . . . a slightly garbled quotation from a speech by Miranda in Shakespeare’s The Tempest, Act V, Scene1. It should read:

How beauteous mankind is! O brave new world,
That hath such people in’t!

Page 380, line 32] Dresden white porcelain items of an elaborate and delicate kind, made at Dresden in Germany.

Page 381, lines 3 & 4] puss-in-the-corner a children’s game for five players. Four players each take a corner of a room and the fifth in the centre is “puss”. The objectives are for the players in the corners to exchange places whilst that of “puss” is to occupy a vacated corner, whilst the losing player becomes “puss” instead. One can see why the players in a Japanese restaurant needed to have their mobility hampered with handkerchiefs.

Page 381, line 21] Monte Carlo the resort in the Principality of Monaco, famous for its casino.

Page 381, line 23] Simla (left, now Shimla) was a hill station in India to which the Government moved during the hot season.It was the location of many of Kipling’s stories and poems.

Page 382, line 20] fire-winds of April in India the hot wind indicated the arrival of summer.

Page 382, lines 32 & 33] for seven years because to me it meant discomfort. Kipling had worked in India for seven years from November 1882 to March 1889. He had found the hot dry weather from April to mid-June, followed by the hot humid monsoon season until September to be very troublesome.

Page 383, line 12] Sarun or Behar Sarun (or Saran) is to the north-west of Patna, while Behar (or Bihar) is to the south-east.. Both were in the District of Patna, which was part of the Province of Bengal. In 1947 Bengal was divided between India and the new state of Pakistan/

Page 384, line 17] cloisonée articles which are decorated with enamel which is inlaid in compartments formed by small fillets of metal. Kipling describes the process on page 387.

Page 384, line 20] tripe-shop tripe is the edible lining of a cow’s stomach (or that of a sheep or goat). It used to be a very cheap, and popular food, sold in a tripe-shop. 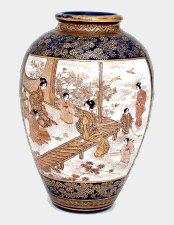 Page 384, line 25] Satsuma is a type of Japanese pottery (left), halfway between earthenware and porcelain because of the temperature at which the clay is fired. It has a cream-coloured body and a crackled glaze.

Page 384, line 31] ‘saggers’ (or ‘saggars’) are fireclay containers, usually oval or round, used to protect pottery from marking by flames and smoke during firing.

Page 384, line 33] Burslem, a town in the English Potteries near Stoke-on-Trent. Kipling’s father, John Lockwood Kipling, was employed there in his

early career as a pottery designer and decorator, and met his wife (Kipling’s mother) there in 1862. 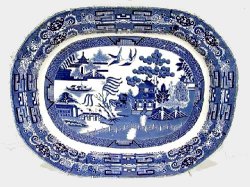 Page 386, line 28] Willow-Pattern Plate the well-known blue and white “willow pattern” design was of obvious oriental inspiration but was first produced in Shropshire, England , by Thomas Turner from about 1790.

Page 386, line 30] bower-birds are a group of Australian birds (of the family Ptilonorhynchidae) noted for the way in which the male, as part of the courtship ritual, builds a bower from various brightly coloured objects that he has collected. There is an earlier reference to them on Page 275, lines 17 & 18.

Page 388, line 1] avanturine enamel or aventurine enamel, made from a brown spangled type of Venetian glass, or a kind of quartz enclosing spangles of mica.

Page 388, line 14] majolica or maiolica, originally a type of Italian pottery coated with an opaque white and metallic-coloured enamel.

tripoli is a fine earth used as a polishing powder, also known as “rotten stone”.
:

emery is a coarse corundum (aluminium oxide) used for polishing metal or glass.
:

Page 388, line 33] lazuli lapis-lazuli is a bright blue stone used as a pigment or occasionally as a semi-precious decoration.

Page 389, line 28] Apotheosis a deification or glorification. A perfect example of its type.

Page 390, line 18] Khoten or Khotan (now Hotan) in Sinkiang, China. Its fine carpets and rugs belong to the category of ‘East Turkestan’.