The edited text largely corresponds with that first published in the Pioneer of 26 October 1889. Note that there was another report published on 19 October 1889 that was not collected in From Sea to Sea. It dealt with the visit to Nagoya, about 90 miles Eeast-north-east of Kyoto.

[Epigraph, Page 392] When I went to hell . . . the source of this old saw (a saying, or proverb) has not been identified. It is always possible that it was an invention of Kipling’s.

[Page 392, line 6] train from Nagoya to Yokohama Yokohama, a seaport on the west of Tokyo Bay, is about 160 miles east-north-east of Nagoya.

[Page 392, line 8] the Tokaido or East Sea Road was a most important road which ran along the coast between Kyoto and Tokyo (formerly Edo). There were 53 staging posts or inns / rest-stations. A most interesting record of a modern (2001) journey in the reverse direction to that of Kipling is described and profusely illustrated in
this web-site.

The railway line which follows the general route of the East Sea Road was still under construction in Spring 1889, but was completed in July of that year. Kipling discusses the railways in his uncollected letter of 19 October.

[Page 392, line 12] the Grand Trunk Kipling is using the name of the Grand Trunk Road in India (see Chapter 4 of Kim for example) to allude to the Japanese East Sea Road.

[Page 393, line 7] E.I.R. East India Railway. Kipling had used the line running from Allahabad to Calcutta in January/February 1888, these travels being described in Volume II of the collected From Sea to Sea and Other Sketches. Presumably he also used it at the start of this 1889 journey to the U.K.

[Page 393, line 10] pro re nata ‘in the circumstances’ or ‘things being what they are’. Kipling is alluding to the necessity of jumping out to relieve oneself because of the lack of lavatories on the trains. [H.C./G.W]

[Page 393, lines 11 to 15] Two days ago they managed to kill … This accident happened on 27 April 1889, the official who was killed being Hida Hamagoro. He was a senior civil servant, formerly naval officer, who had attempted to use the station lavatories, and on returning, had slipped between the platform and the train as it moved off and was run over. [H.C./G.W]

[Page 393, line 21] a great lake was the Hamana lagoon, the mouth of which opens directly into the Pacific Ocean. It lies to the west of Shizuoka.

[Page 393, line 33] Hoshiarpur an Indian town and District in the Punjab, with Amritsar to the west and Himal Pradesh to the east.

[Page 394, line 4] Nancy The French National School of Forestry was opened in 1824 at Nancy, in the east of France. Some candidates for the Indian Forestry Service were sent there, and Kipling is here suggesting that the Japanese have also learnt their forestry techniques at Nancy.It is also mentioned in the story “In the Rukh” in Many Inventions.

[Page 394, line 13] London, Chatham and Dover A railway line in England running south of the Thames down into Kent, in the south-east corner of England.

[Page 394, line 15] Channel Tunnel The first attempt at a tunnel excavation between England and France began in 1880 when the “Beaumont & English” tunnel boring machine began digging undersea on both sides of the Channel.

[Page 394, line 31 et seq.] ’Yes, Japan’s an excellent country as regards . . .’ Kipling’s Anglo-Indian readers would have understood the irony of these remarks. See Plain Tales from the Hills for example.

[Page 395, line 1] 86º degrees Fahrenheit. The equivalent on the Centigrade (Celsius) scale is 30º, uncomfortably hot for a European. 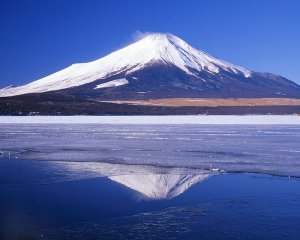 [Page 396, lines 11 & 12] Kinchinjunga or Kanchenjunga is a peak in the Himalayas on the boundary between Nepal and Sikkim. At 28,146 feet it is the third highest mountain in the world, and is visible from Darjeeling in India. 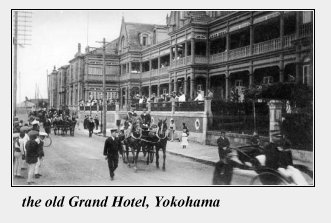 [Page 398, line 8] Patagonian the language spoken in the region made up of the extreme parts of Chile and Argentina at the southernmost tip of South America.

[Page 399, line 3] Salem an American coastal town in Massachusetts, about 14 miles north-east of Boston, founded in 1626.

[Page 399, line 4] Mayflower the vessel in which the Pilgrim Fathers sailed to America from Plymouth in Devon in 1620, arriving at Cape Cod, Massachusetts.

[Page 399, lines 15 & 16] ’Round the Horn’ As far as this Editor has been able to discover from the internet, this is or was a game played by two or more people using six dice. The scoring is fixed for a given result, but the player decides which dice to count towards their score, and throwing the discounted ones again. See
this web-site.

[Page 399, line 18] Omaha a major city in Nebraska in the United States, on the Missouri River.

[Page 400, line 5] ’Frisco San Francisco on the western seaboard of America. Kipling and his companions would sail there from Yokohama at the end of the visit to Japan.

[Page 400, line 24] spittoon or cuspidor. A vessel into which people spit, particularly those who chew tobacco. Much more will be written about these devices when Kipling reaches America.

[Page 400, line 31] 13.2 cart-horses a sarcastic allusion to the small horses in Japan. A polo-pony in India would normally have been 14 hands or 4ft 8 inches at the shoulder. (a hand is four inches, or some 10 cm.) 13.2 hands would be extremely small for a carthorse, which would more typically be over 15 hands.

[Page 401, lines 7 & 8] Myanoshita is one of seven hot spring towns in Hakone. A resort hotel targeting foreign visitors opened in 1878.

[Page 401, lines 14 & 15] Carmel . . . Edward M. Petree There are at least three locations in the U.S.A named Carmel; in Indiana, California and New York. However, this sounds to be rather a ‘tall story’, rather than an actual event.

[Page 401, line 30] Simla . . . Kalka Simla was the summer captial of British India. Until a light railway was built in 1903 from Kalka at the foot of the hills up to Simla, the climb of 5,000 ft over a distance of 50 miles was made in a variety of wheeled contrivances.

[Page 402, line 14] two vile hostelries Kipling probably stayed at the Fujiya Hotel, the other hotel being the Naraya. [H.C./G.W.]
See this web-site.

[Page 404, line 21] D.T. short for delirium tremens, a disordered mental and physical state brought on by the excessive intake of alcohol. See ‘Alcoholism’ in Dr Gilian Sheehan’s article on “Kipling and Medicine”.