The edited text corresponds with that first published in the Pioneer of 29 June 1889.

Readers may find this map useful for following this report.

[Page 288, line 6] bund Hobson-Jobson defines a bund as an artificial embankment. This Sanskit/Persian word in the Anglo-Chinese ports ‘… is applied especially to the embanked quay along the shore of the settlements. In Hong Kong alone this is called not bund, but praia (Portuguese for ‘shore’).’

[Page 289, line 31] the Golden Gate The strait leading from the Pacific Ocean into San Francisco Bay in California. It was so named in 1849 during the Gold Rush. The bridge of that name across the strait was not built until 1933-37. 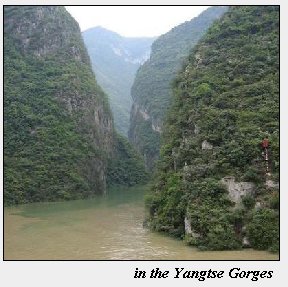 [Page 290, line 6] Yangtze gorges on the Yangtze river. The river rises in the eastern part of the Tibetan plateau and flows in a generally easterly direction to debouch into the East China Sea at Shanghai.

The gorges, which are an area of great natural beauty, are about 200 miles west of Shanghai.

[Page 290, line 19] the Rigi a peak between Lake Lucerne and the Zugersee in Switzerland. It is 5,905 feet high and is served by two rack-and-pinion railways, built in the 1870s. In 1873, the driving power came from steam engine No.7, which has a vertical boiler. 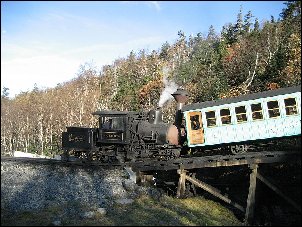 [Page 290, line 20] Mount Washington a peak in the Presidential Range of the White Mountains, northern New Hampshire, USA. Its height is 6288 feet. A cog railway to the summit (left) was built in 1869.
See this New Hampshire web-site.

[Page 290, line 23] Chaura Maidan meaning the wide or broad open area. The Chaura Maidan Road runs from The Mall westwards towards Summer Hill Road, passing below Peterhof (the Viceroy’s residence until 1888). This maidan has not been located on the maps available, but the general terrain in and around Simla (Shimla) is very broken and would indeed provide a hair-raising ride as Kipling hypothesises. A good impression of the terrain can be obtained from the photographs in this Shimla website.

[Page 290, line 32] tiffin Hobson-Jobson defines this as: ‘Luncheon, Anglo-Indian and Hindustani, at least in English households.’ Thus it would be a repast taken around midday. One apposite citation from 1850 that is given is as follows:

‘A vulgar man, who enjoys a champagne tiffin and swindles his servants … may be a pleasant companion to those who do not hold him in contempt as a vulgar knave, but he is not a gentleman.’
[Sir C. Napier, Farewell Address.]

[Page 291, line 2] Dalhousie a Punjab hill station towards the head of the River Ravi. Kipling and his sister, after staying there, referred to it as “Dull houses”. See also the article by Jane Caleb in KJ 328.

[Page 291, line 4] dandy Hobson-Jobson defines this as: ‘a kind of vehicle used in the Himalayas, consisting of a strong cloth slung like a hammock to a bamboo staff and carried by two (or more) men. The traveller can either sit sideways, or lie on his back.’

[Page 291, line 7] tonjon Hobson-Jobson defines this as: ‘a sort of sedan or portable chair. It is (at least in the Bengal Presidency) carried like a palankin by a single pole and four bearers.’

[Page 291, line 15] Chakrata a hill station in Garhwal about 50 miles east of Simla and about the same height as Mahableshwar. [ORG]

[Page 291, line 16] Solon to Kasauli Solon or Solan is a station on the road between Kalka and Kandaghat on the way up to Simla. Kasauli is off this road to the west before one reaches Solon, the minor road leading to it starting near Dharampur.

[Page 292, line 18] Portsmouth Hard the approach to the main gates of Portsmouth Dockyard on the south coast of England.

[Page 294, line 15] gentlemen of the Ditch inhabitants of Calcutta. The Ditch is a familiar name for the Circular Canal, built in 1742 which runs round the city as it then was. Hobson-Jobson describes it thus:

An excavation made in 1742, as described in the extract from Orme (below), on the landward sides of Calcutta, to protect the settlement from the Mahratta bands. Hence the term, or for shortness ‘The Ditch’ simply, as a disparaging name for Calcutta [and its European citizens]. The line of the Ditch corresponded nearly with the outside of the existing Circular Road, except at the S.E. and S., where the work was never executed.

1742.—’In the year 1742 the Indian inhabitants of the Colony requested and obtained permission to dig a ditch at their own expense, round the Company’s bounds, from the northern parts of Sootanatty to the southern part of Govindpore. In six months three miles were finished: when the inhabitants…discontinued the work, which from the occasion was called the Morattoe ditch.’
[Orme, ed. 1803, ii. 45.]

[Page 294, line 29] line from Shanghai to Lhassa or Lhasa, the capital of Tibet. The final stage of this line was opened in July 2006, about 117 years after Kipling posed the question. 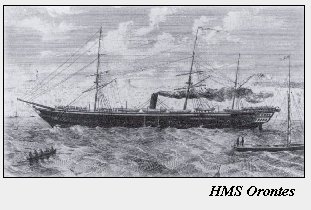 [Page 296, lines 8 & 9] the ancient three-decker converted into a military hospital actually a screw two-decker, H.M.S. Mecanee, lent to the War Department. It was a local joke in Hong-Kong that the military hospital was afloat and the naval hospital ashore. [ORG]

[Page 297, line 5] Aberdeen a village on the east coast of Hong-Kong Island, past Victoria Point.

[Page 297, line 6] Stanley further round and on the south-east coast of the Island.

[Page 297, line 7] Ti-tam reservoir a reservoir on the southern side of the Island.

[Page 297, line 20] Lochaber a mountainour district in Invernessshire, in the Scottish Highlands.

[Page 300, line 3] Stonecutter’s Island an island across the strait from Victoria Point, close to the mainland of Hong-Kong.

[Page 300, line 32] Theog a village to the north-east of Simla on the road towards Rampur and from thence on into the hills.

[Page 301, line 21] Canton or Guangzhou or Guangdong, is a major city on the Pearl River (sometimes called the Canton River). It is about 85 miles north-west of Hong-Kong up the river.