The edited text largely corresponds with that first published in the Pioneer of 1 October1889.

During the visit to Kyoto, Kipling wrote a piece of light fiction for the Civil and Military Gazette with the title “Griffiths the Safe Man”, first published on 31 July 1889. The story was later collected in Abaft the Funnel (1909).

[Epigraph, Page 363] Could I but write . . . this stanza is assumed to be by Kipling since it has not been traced to any other author.

[Page 365, line 12] Foochow or Fuzhou. A seaport in soutrh-east China, about halfway between Hong-Kong and Shanghai.

[Page 365, line 15] Assam and Kangra Teas from north-east India and the Punjab respectively.

[Page 365, line 25] Hankow or Hangchou. A seaport in eastern China, about 110 miles south-west of Shanghai.

[Page 365, line 31] Mincing Lane a street in the City of London where the great tea auctions took place.

[Page 366, line 2] equal to sample the bulk shipments were of the same quality as the small quantity that had been supplied for testing by the buyer.

[Page 367, line 1] compradore in China and the Far East, a native agent or intermediary through whom a foreign firm trades.

[Page 367, line 24] broken by exchange In India the value of the rupee was based on a silver standard whereas its major trading partners, primarily the United Kingdom, used gold as their standard. In the 1870s and 80s, significant deposits of silver were discovered in America and elsewhere which had the effect of pushing down the market value of silver when compared to gold. By 1886, the rupee was roughly equivalent to one shilling and sixpence, or 18 old pence (£0.075 in the current decimal currency), down from 20 old pence (or £0.083 modern) in 1880. This was a decline of 10 percent in five years or so.

[Page 368, line 15] great bell of Kioto is in the Chion-in temple in Kyoto. Details of the temple and monastery complex can be found at: this web-site.

[Page 368, line 15] hotel this description suggests that the travellers stayed in Yaami’s Hotel. It was one of the principal hotels used by foreign travellers in the late 19th century. [HC/GW]

[Page 372, line 1] avanturine or aventurine. A brown spangled type of Venetian glass, or a kind of quartz enclosing spangles of mica.

[Page 372, line 13] Pali an Indian language of great antiquity, and of the Buddhist canonical books.

[Page 372, line 14] the Apostle of Unworldliness the Buddha himself.

[Page 372, line 21] Arundel in Sussex, England, where it is the seat of the Duke of Norfolk, the senior Roman Catholic layman in England. It has a fine cathedral (right), dedicated in 1873

Tully, my masters? Ulpian serves his need!
And then how I shall lie through centuries,
And hear the blessed mutter of the mass,
And see God made… 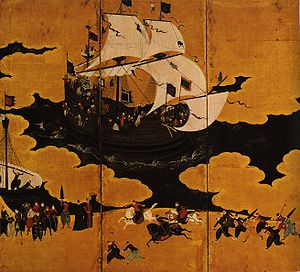 The appending of the R.A. (Royal Academician) in line 8 is a gentle joke by Kipling.

[Page 373, line 33] Fujiyama The dormant cone-shaped volcano that is the highest mountain in Japan (12,388 ft), located just to the west of Tokyo. 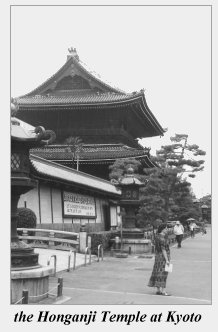 [Page 375, line 12] That was burned down . . . Kipling is referring to the Higashi (or Eastern) Honganji temple, which was founded in 1602 and burnt down several times.

The current buildings date back to 1895, paid for by donations from local inhabitants. The materials for the hair ropes were given by female devotees when the was found to be insufficient conventional rope, and so they cut off their hair to weave about 50 massive ropes. [H.C./G.W.]

[Page 376, line 16] Arashima or Arashiyama. The rapids are on the Hozu River, and do not sound too fearsome since in 2009 it is recorded that boat trips pass through them, powered by three boatmen. See
ths web-site.

[Page 377, line 7] Dacca and Patna Dacca (now Dhaka) is a major port on the extreme east of the Ganges Delta, and the capital city of Bangladesh. Patna is upstream in India in the direction of Varanasi (formerly Benares).

[Page 378, line 3] Ravi the river which runs just outside the walls of the old city of Lahore.