The edited text corresponds with that first published in the Pioneer of 18 June 1889.

[Title] Jenny and her Friends Prostitutes. The reference is first to the poem “Jenny” by Gabriel Dante Rossetti (1828-1882). The poem starts with a quotation from Shakespeare’s The Merry Wives of Windsor Act IV, sc.i, line.65: ‘Vengeance of Jenny’s case! fie on her!—never name her, child, if she be a whore.’ See page 278, lines 5 & 6 below. [ORG] 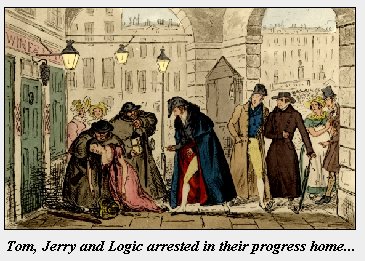 Corinthian Kate A lady of easy virtue in cartoons by George Cruikshank (1792-1878) in Real Life in London, published by Pierce Egan (1772-1849).
One of these has the title ‘Tom, Jerry and Logic arrested in their progress home by the melancholy discovery of Corinthian Kate in the last stage of a consumption disease and inebriety’.

[Page 278, lines 5 & 6] ladies of the Ancient Profession Prostitution in India was open to women of all races save only the British at this time. This was established in order to preserve the reputation amd separate status of the rulers of the Empire.

Kipling made frequent allusions to prostitutes in his works. Examples are to be found in “On the City Wall”; “The Church that was at Antioch”; “The Record of Badalia Herodsfoot”; Something of Myself, Chap III; “In the House of Suddhoo”; The City of Dreadful Night, Chap.VI; “In Partibus”; etc..

[Page 279, lines 2 & 3] I went through Hong-Kong for the space of a night this was a repeat of the excursions that he had made in Calcutta recorded in The City of Dreadful Night.

—five fiends have been in poor Tom at once; of lust as Obdicut …
[ORG] 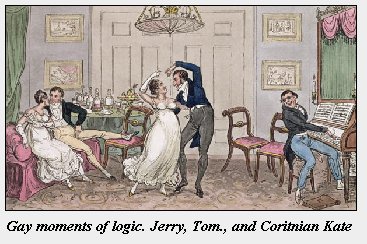 [Page 281, line 28] the Oxonian in Tom and Jerry playing jigs This, and the following lines, refer to a George Cruikshank cartoon entitled “An Introduction: Gay moments of Logic, Jerry, Tom and Corinthian Kate” in Real Life in London, published by Pierce Egan.

[Page 281, line 30] Corinthian in the sense used here it means dissolute or profligate.

[Page 282, line 22] brevet a military commission entitling an officer, normally on active service, to temporarily take a rank above the substantive rank for which he receives pay.

[Page 282, line 33] cholera The word “cholera” has been used rather freely in the past and has been applied loosely to a number of diseases in which diarrhoea is a prominent symptom. See the article by Dr Gillian Sheehan,on “Kipling and Medicine”. 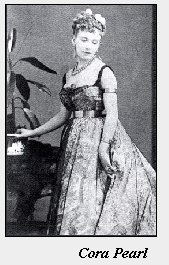 [Page 283, line 29] Cora Pearl, born Emma Elizabeth Crouch (1835?-86) in England, who took the name Cora Pearl when she set up in France. She was a well-known courtesan with a number of wealthy lovers, but thanks to a gambling habit, died in poverty.

[Page 284, line 2] young Duval One wealthy man, Alexandre Duval, harassed Cora Pearl constantly, never ceasing in his attempts to manipulate her. He threw large sums of money at her, and was extremely jealous of her involvement with other men. Her attempts at ending the relationship were unsuccessful. When she finally was able to end the affair, he came to her home, produced a gun and shot himself on her doorstep. (Duval was severely injured, but survived.) Pearl did not summon help, nor contact the authorities. Instead, she retreated into her house, and went to sleep. [Wikipedia]

[Page 287, line 10] thirty dollars An echo of the thirty pieces of silver paid to Judas, one of Christ’s disciples in the Garden called Gethsemane. [Matthew 16,15 and 17. [ORG]