A gauche young girl of seventeen in Simla bemoans the fact that her main rival for the attentions of young men at balls and parties is a talented witty woman who is over twice her age. Her only consolation is that when she reaches the same mature years her rival will be over eighty.

The poem, although it describes the dilemma faced by many young girls in the social whirl of Simla, is agreed by most critics to have reflected the state-of-mind of Kipling’s sister ‘Trix’, vis-a-vis her brilliant mother Alice. Charles Allen (p. 189) suggests that the poem was written jointly by Rudyard and his sister, or perhaps first drafted by ‘Trix’ herself. 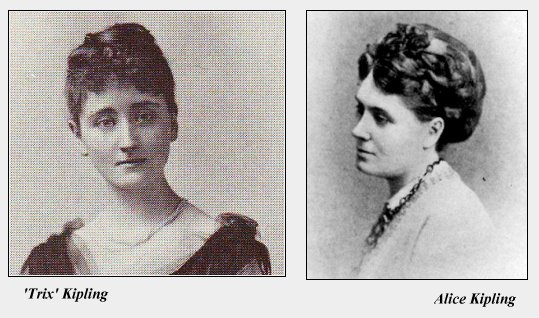 Kipling’s mother was undoubtedly a striking woman. Andrew Lycett quotes (p. 13) a description of her in her youth as:

… slender, pale complexion, dark brown hair and grey eyes, with black lashes and delicately pencilled eyebrows. In those eyes lay the chief fascination of her face. So expressive were they that they seemed to deepen or pale in colour according to passing emotion .. it was impossible to predict how she would act at any given point. There was a certain fascination in this, and fascinating she certainly was …

In her youth Alice had written sonnets, and sang beautifully. She was a lively witty woman, and in Simla Lord Dufferin, the Viceroy, said of her: ‘Dullness and Mrs. Kipling cannot exist in the same room.’ Mrs Kipling was aged forty-eight when this poem was written.

However, ‘Trix’, seventeen at the time, seems to have been far from the awkward blushing creature of the poem. She had come out to India at the age of fifteen, and like her mother was lively, witty, and beautiful. She wrote poetry with Rudyard, and later wrote two novels. Major-General J C Rimington, a schoolfellow of Kipling’s, who visited the family in Simla, wrote of ‘Trix’:

Their daughter, Beatrice, a delightful girl who had only recently
come out from home, had inherited most of her mother’s wit and
skill, and later proved herself no mean novelist and poet. Looking
back over all these years, it seems to me that I, uncouth youth that
I was, felt rather shy in the company of this brilliant, witty girl.
[KJ 059 p. 11]

Charles Allen suggests (page 190) that another reason that Trix did not attract the attention of young men, may have been that the Kiplings were not very high on the social scale in Simla. This changed, however, when they became friendly with the Viceroy, Lord Dufferin.

Lord Clandeboye, the Viceroy’s son, conceived a passion for her, and twice asked her to marry him, but was rejected. (see Lycett (p.132). When the Viceroy suggested to Alice that perhaps she should take ‘Trix’ to another hill-station, Mrs Kipling retorted that perhaps the young man should be sent home. He was.

There is an interesting article about ‘Trix’ in KJ 204 for December 1977 by Dorothy Adelson, who cites “My Rival” as suggesting an undercurrent of strain between mother and daughter. We are not aware of what Alice Kipling made of the poem.

Peter Keating suggests that Bret Harte’s “Her Letter” was a possible model for this piece.

I’m sitting alone by the fire,
Dressed just as I came from the dance,
In a robe even you would admire,—
It cost a cool thousand in France;
I’m bediamonded out of all reason,
My hair is done up in a cue:
In short, sir, “the belle of the season”
Is wasting an hour on you…

In KJ 163 (p.22), Professor F L Standley of Florida University reports an item in the Poetry Collection, Strozier Library, Florida State University. On page 124 of a first edition of Departmental Ditties, Barrack Room Ballads and Other Verses (New York, 1890) there is a marginal note which purports to be by Kipling, and states that the poem is ‘after Thos. Hood.’ However, we have established that it is not in Kipling’s hand.
Ann Weygandt notes (p.131) echoes of Winthrop Mackworth Praed (1802-1839) :

There is a flavor not unlike “The Belle of the Ballroom” about “My Rival”, and it is written in the stanza of “Sketch of a Young Lady Five Months Old”.

Whatever its origins, there seems no doubt that Kipling’s readers in Simla would have found familiar echoes in the piece.

[Verse 1] I go to concert, party, ball… Because of the great heat in the plains of India in the summer-time, the Viceroy and his senior officials would move up from Calcutta to Simla, 7000 feet (2,200 metres) up in the foothills of the Himalayas, between May and October. Officals from other departments, soldiers, journalists like Kipling, and others who could afford it, would get some weeks of leave in the hot season, and head for the hill stations.

Their wives and daughters would go with them, sometimes in advance. and In those summer months there was a great atmosphere of holiday in Simla, with a lively social round of parties, balls and entertainments.

[Verse 4] They ride beside her rickshaw A rickshaw was a light carriage, drawn by strong men (jhampanies), often smartly turned out. Ladies would drive to and fro along the Mall, the main thoroughfare of Simla, and young men could ride alongside them to pass the time of day. In“The Phantom Rickshaw” the doomed Mrs Keith-Wessington had her jhampanies dressed in black and white livery, and yellow panels on her carriage.

[Verse 6] “Cast” lovers, I opine An equine metaphor. A lame horse, fit no longer for riding, would be ‘cast’, set aside, and retired to grass, or slaughtered.